Lewes Book Bargains: First Editions of Death Message, Bloodline and In the Dark by Mark Billingham

So then. Thus far in this run of posts on British crime fiction author Mark Billingham and his series of novels starring Detective Inspector Tom Thorne we've had an irritable, overlong essay on his debut novel, 2001's Sleepyhead, and how it compares to the Sky One TV series Thorne: Sleepyhead, and another, perhaps even more irritable but not quite so long essay on its 2002 sequel, Scaredy Cat, and how it stacks up against the Sky One TV series Thorne: Scaredy Cat. Now it's time to turn to some Lewes – and, to follow, Brighton – Book Bargains, i.e. first editions of a number of Billingham's books I've bought in Lewes (where I live and work) and Brighton (which I often visit) charity shops recently.

All of them, I'm pretty sure, were cast-offs from British Bookshops, the chain of South East shops which went into administration at the start of the year. Seems the outlets in Lewes and Brighton – and presumably elsewhere – had a clear-out of their stockrooms when, to use a local gang colloquialism, shit went down, and the multitudinous charity shops in the area were suddenly overwhelmed with hardback novels published over the past five years or so. So while British Bookshops going down the pan was a bit of a bugger for the people who worked in them and the towns where they were situated (losing any bookshop in this day and age is to be regretted), on the plus side at least I ended up with a bunch of cheap firsts, mostly for a quid a piece.

Happily, both the Lewes and Brighton branches have been reprieved, having been bought out by WHSmiths (it's been an unhappier ending for the stores who weren't bought by Smiths). In fact, I believe the Lewes one is due to reopen any day. It may even be open now; I shall have to rouse myself from my torpor and pop up the road to have a look. And to commemorate its return to trading, here are those British Bookshops Billingham Book Bargains, Lewes Contingent (all bought in the big Hospice charity shop near Waitrose, I believe): 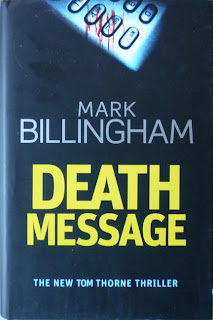 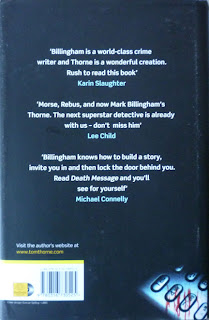 A UK hardback first edition of Death Message, published by Little, Brown in 2007. It's the seventh Tom Thorne novel; in this one Thorne starts receiving photos of murder victims on his mobile phone, sent by a killer recently released from prison. The jacket was designed by Duncan Spilling, Little, Brown's Creative Director, who has, as we'll see, designed quite a few Thorne covers.

Spilling is a respected name in book design circles; this post by Amanda Craig singles him out as someone who seemingly takes the trouble to read a book before he works up a cover for it – a method of research you'd think most designers would follow, but few actually do. In this report from the 2009 Bookseller Cover Design Seminar Spilling himself is quoted having a go at the practice of designing covers without even a title to work from, which is a ridiculous state of affairs. His choice of image for Death Message – a blood-streaked mobile phone – may be a little obvious, but that's no bad thing, and it certainly hews to the plot of the book. 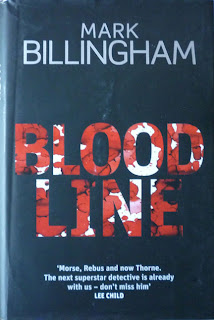 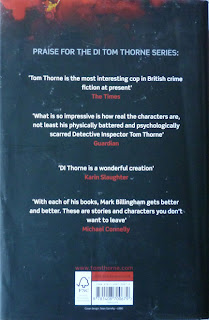 A UK hardback first edition of Bloodline, published by Little, Brown in 2009. The eighth Thorne thriller – and therefore the direct sequel to Death Message – in this one a blood-stained sliver of x-ray is found in a murdered woman's hand; it turns out the woman's mother was also murdered fifteen years before by a serial killer named Raymond Garvey. When further murder victims are found similarly clutching x-ray slivers, it becomes clear someone is targeting the children of Garvey's victims. The dustjacket design here is by Little, Brown's Art Director Sean Garrehy.

And finally, and originally published in-between the above two books: 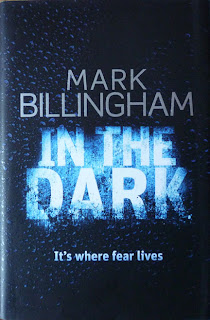 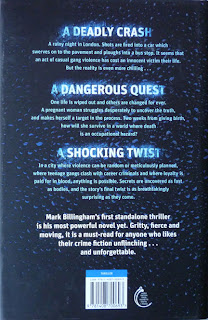 A UK hardback first edition of In the Dark, published by Little, Brown in 2008, with a jacket again designed by Duncan Spilling. This is Billingham's only standalone novel, so it's not part of the Thorne series, although Tom does appear in a minor role. I dimly recall reading somewhere that this is the book Billingham's most proud of, simply because it's his only non-series work; it's about a shooting in London which results in a car swerving into a queue at a bus stop, and the subsequent clash between aging gangsters and teenage upstarts (shit went down, slight return). The novel received excellent notices when it was published, and I may, in fact, shuffle it to the top of my Billingham to-read pile, partly for a reason I'll outline in the next post, but mostly because it's supposed to be dead good. Indeed, Ali Karim in this interview with Billingham for January Magazine compares it favourably to George Pelecanos. To which I can only respond: sold.

Next up: those Billingham Brighton Book Bargains... which now boast a comment from Mr. Billingham himself...
Posted by Nick Jones (Louis XIV, the Sun King) at 08:35