Out on the Rim by Ross Thomas, and the Artie Wu / Quincy Durant Collection

I've got one more recently acquired book to show in this final Ross Thomas Week post, although I will be returning to Thomas; I'm reading his 1967 book Cast a Yellow Shadow at the moment, so I'll have a review of that before long, and there are still a fair few books in his back catalogue I've yet to track down. For now, though, there's this: 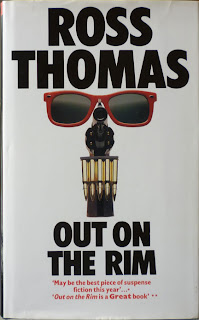 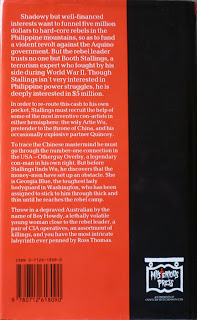 The 1987 UK hardback first edition of Out on the Rim, published by Century Hutchinson / Mysterious Press – two imprints that are no longer with us, both having been swallowed up by other publishers, although Mysterious Press will be getting a relaunch next year. Out on the Rim is the second of Thomas's trilogy of novels starring Artie Wu and Quincy Durant; I blogged about the first one, Chinaman's Chance, a couple of days ago, and I picked up a copy of the third, Voodoo, Ltd., at the last Lewes Book Fair. So now I have all three: 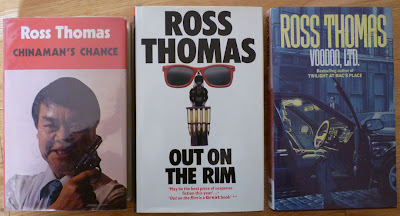 On the strength of the completely brilliant Chinaman's Chance, I'm really looking forward to reading Out on the Rim, which is about an attempt to misappropriate $5 million from a Philippines rebel group. I can't tell you who designed the dustjacket this time out as there's no credit, but I do sort of prefer it to the American first edition: 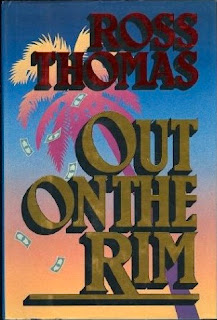 And that is about that for Ross Thomas Week. Next week, and probably the week after too, it's back to mixed bag blogging. There'll be a bit of Donald E. Westlake business, including a Parker Progress Report, this time reviewing Slayground, plus a Westlake Score or two, one of them featuring a never-before-seen-on-the-'net (at least, as far as I'm aware) Richard Stark cover. There'll be at least one Notes from the Small Press. I'll be returning to Dennis Lehane's Kenzie and Gennaro novels, with a look at the latest one, Moonlight Mile, and how Lehane's new UK publisher is handling the publicity for the book. There'll be that Beverley le Barrow James Bond cover gallery I promised, and some Lewes Book Bargains, and stuff from John le Carre, and Lee Child, and Kingsley Amis, and Francis Clifford, and who knows what else.

That's all in the future though. For right now, I'm off to hospital to have a camera shoved down my throat. Brilliant. Wish me luck. And see you on the other side...
Posted by Nick Jones (Louis XIV, the Sun King) at 03:40