As mentioned in the previous post, I've got a great stack of books to showcase, most of which were snaffled off the internet shortly before my detour from wellness, and have been trickling in ever since. I'll be blogging about them in roughly the order they arrived, interspersed with other posts so it doesn't all get too tiresome (for you lot I mean, although I guess for me too). And we'll begin with this: 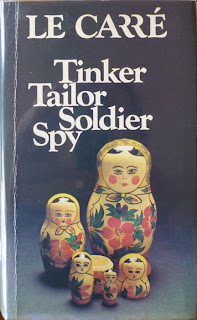 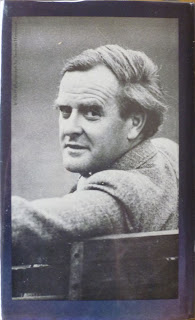 A UK hardback first edition/impression of John le Carré's Tinker, Tailor, Soldier, Spy, published by Hodder & Stoughton in 1974. This is one of those books I've been meaning to get my hands on for some time; I vaguely recall the BBC TV series from 1979, starring Alec Guinness as spymaster George Smiley, and earlier in the year I picked up a first edition of the third book in le Carré's Karla Trilogy, Smiley's People (1979; the second being 1977's The Honourable Schoolboy), so I figured I'd nab this one too. That rather fab front jacket photo is by Jerry Harpur, who may or may not be the same Jerry Harpur renowned for his photographs of gardens (my research for this post was, as ever, I'm sure you can tell, in-depth and extensive), while the design concept was by Lippincott and Margulies Limited of London.

Tinker, Tailor, Soldier, Spy, the plot of which alludes to the Burgess/Blunt/Philby/Maclean Cambridge spy ring, isn't the first of le Carré's novels to feature George Smiley. The character pops up in the author's debut novel, Call for the Dead (1961), and in the likes of The Spy Who Came in from the Cold (1963) and The Looking Glass War (1965). But Le Carré revised Smiley's history and background somewhat for the Karla Trilogy, so I should be able to read Tinker, Tailor without having to read any of the earlier novels. That said, I do also now have one of those earlier novels, which I'll be blogging about at some point...

It's actually remarkably tricky to get hold of true first editions of Tinker, Tailor, Soldier, Spy; there are plenty of Book Club editions around, but decent copies of the first printing of the hardback, with a dustjacket? Not so much. This copy has a fold in the jacket, but other than that it's in pretty good nick, and it was fairly cheap too (a tenner, as opposed to the forty-plus quid I just saw a copy go for on eBay). It took a fair bit of internet research, with a certain amount of back and forth with dealers, before I determined this was the right book, but I got there in the end. Go me.

UPDATE: I've since reviewed the novel, contrasting it with the BBC TV series. And you can read that post here.
Posted by Nick Jones (Louis XIV, the Sun King) at 09:14