And from high-octane international espionage to, er, a tumbledown cottage near Newmarket:

A UK first edition hardback of Kingsley Amis' Ending Up, published by Jonathan Cape in 1974. I got this, dead cheap, on eBay, from the same seller as The Bourne Ultimatum. I hadn't really been planning to buy any more Amis novels – I've still got a fair few to read as it is – but it was, as I say, very inexpensive, and I liked the sound of it, concerning, as it does, a septuagenarian commune in the run-up to Christmas. Flicking through it I came across this choice Amis line at the start of Chapter 30:

Christmas dinner was something of a success; it passed off, at any rate, without bloodshed.

Which I'm sure could apply to many people's experience of Christmas; I think I'll save this one for the festive period... The jacket is by Raymond Hawkey, who's probably best known books-wise for his jackets for Len Deighton's novels (including The Ipcress File) and covers for the 1960s Pan paperback editions of the Bond books, but he also turned his hand to a number of Amis' books: 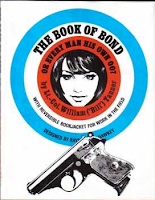 His designs are always fascinating; I love the accoutrements of old age on the cover of Ending Up, and the military detritus on The Anti-Death League. Smashing stuff.
Posted by Nick Jones (Louis XIV, the Sun King) at 08:04