Review: Darwyn Cooke's The Man with the Getaway Face

Back from Brighton clutching this in my sweaty paws:

Darwyn Cooke's oversized comics adaptation of Richard Stark's second Parker novel, The Man with the Getaway Face, which I mentioned on Tuesday was out this week. And a fine object it is too: taller and wider than yer average American comic book, printed on a nice thick matt stock. I tore through it on the train home and it stacks up well against the novel. It's only 24 pages long, so obviously Cooke has had to eject parts of the novel, notably Stubbs' story, which is a shame, and also as a result of that Stark/Westlake's killer twist of the knife at the end of the book. But the essentials are all here, kicking off with Parker's plastic surgery, which Cooke deals with in elegant fashion across the title page and the following page:

What Cooke's really good at – aside from drawing, storytelling and all the rest – is visualizing Stark/Westlake's world of highway diners, mangy motel rooms and forgotten urban sprawl. His take on Parker's environment feels as authentic as in the novels. It helps that he's chosen to do period adaptations of the books, but it's more than that: he gets what makes the Parker books tick.

As with Cooke's The Hunter, parts of the comic are 'silent', in particular the heist on the payroll truck: 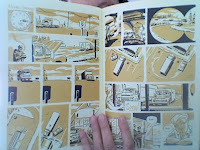 Translating the mechanics of the robbery from words to pictures alone is some feat. So yeah, it's excellent stuff, and all for $2. Bargain.

One final thing, and look away here if you don't want the ending spoiled (although in truth it's not actually the ending; this is, after all, merely a prelude to the main graphic novel, The Outfit, which is out in October): Skim, the guy who pulls Parker into the job, is doublecrossed by his girlfriend and knifed after the heist. So far, so like the novel. But here he survives, and is last seen being carted off in an ambulance. I can't remember for sure right now, but did he survive in the novel? I don't think he did, and now I come to think of it, Trent's review on Violent World of Parker did mention a new plot twist. I guess this is it. And it makes me wonder if, as Trent also suggests, Skim's survival will play into The Outfit. I reckon he could be the stand-in for the missing Stubbs' cohorts blowing Parker's cover at the end of The Man with the Getaway Face...
Posted by Nick Jones (Louis XIV, the Sun King) at 08:10