The Island Without Any Bookshops

Actually that's not quite true: Guernsey does have some bookshops. It's just they're of the WHSmiths variety: new books only, and a limited selection at that.

Yes, I'm back from a week's break in the Channel Island known as Guernsey, where you'd think, with a population of 65,000, there might be a second hand bookshop or two. But no. You'd be wrong. They do have the occasional book fair there – I missed the most recent one by a matter of days – but no second hand bookshops, as a befuddled man in a stamp and postcard collectors' shop explained to me. Still, they do have a lovely coastline: 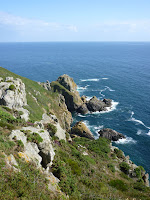 so it's not all bad. And of course I did manage to ferret out a few books here and there in charity shops and the like, including at one point a little stall by the side of the road (Guernsey is dotted with little boxes on garden walls containing what's known as 'hedge veg': local produce for sale to anyone passing): 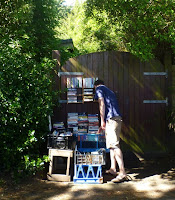 That's me having a rummage. I didn't find anything there, but I did pick these up elsewhere:

A 1971 UK first edition of Hammond Innes' Lekvas Man, published in hardback by Collins, and a 1984 UK first edition of Frederick Forsyth's The Fourth Protocol, published in hardback by Hutchinson. Not exactly scarce either of 'em, but at 50p apiece I can't really complain, and with so few books on offer on the island, well, beggars can't be choosers. Not sure if the Innes will be my cup of tea, but I liked the jacket, which was designed by Richard Dalkins. As for the Forsyth, I read The Day of the Jackal years and years ago, and The Fourth Protocol is supposed to be a solid read. The jacket was designed by Raymond Hawkey, who I've mentioned before, and which I was surprised about: it's not particularly creative. I mean, it's striking enough, but not up there with, say, The Book of Bond.

I did manage to polish off a couple of books in the past week: Richard Stark's The Black Ice Score and Geoffrey Household's Rogue Male, but I'll blog about those separately. So yes. I'm back. Hang out the fecking bunting.
Posted by Nick Jones (Louis XIV, the Sun King) at 12:33