Here's what I was waiting for:

A first edition of Richard Stark's Butcher's Moon, published in the US by Random House in 1974. It's the sixteenth Parker novel, coming at the end of the original run of Parker novels from 1962–1974. It's also, I believe, either the longest or one of the longest of the Parker books, clocking in at over 300 pages. Most of the novels before this one are about half the length.

Took a wee while to track this one down, at least at a price I could afford. It's one of the rarest Parker novels; there have only been three editions of it up to now: this one from Random House, a UK Coronet paperback in 1977, and an Avon paperback in 1985. The Random House edition is the only hardback edition. There'll be a new paperback edition from University of Chicago Press (who've been reprinting the Parker books) either later this year or start of next.

This is a nice copy; it's not ex-library, the jacket (which I love; it was designed by one Ira Teichberg) is clean and bright with a few small marks on the spine, and the pages are cream. The only defect inside is on the listed previous Parker novels at the front, where the book's last owner has, rather sweetly, put a small, neat tick next to the titles he or she owned at that point. 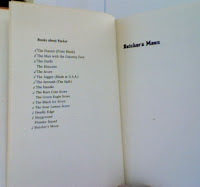 You can just about see they're missing The Mourner, The Green Eagle Score and Plunder Squad. I hope she or he tracked them down eventually.

And for good measure, here's the board cover too, with its black spine and cute mirrored buildings deboss on the front: