I didn't think there'd be much out for me this week comics-wise, but there are a few things. Namely:

American Vampire #1. This is Vertigo's new ongoing vampire series. I guess the main selling point with this one is the presence of Stephen King writing the back-up story, the first time he's actually written a comic, as opposed to having one of his novels adapted as a comic. The lead story is written by Scott Snyder, about whom I know nowt, but the artwork's by Rafael Albuquerque, an artist I first noticed when I was looking for potential artists for a Tank Girl comic I was editing. I think I'd seen his art in Savage Brothers and was impressed. He went on to draw Blue Beetle for DC. Talented guy.

Dark Avengers #15. Another Siege tie-in, and possibly some more revelations about the Sentry. Only problem is, I couldn't give a rat's twat about the Sentry. He was a potentially intriguing idea when Paul Jenkins first retconned him into Marvel continuity – a 'forgotten' Superman-like character with a very literal dark side – but nobody's found anything interesting to do with him since. And now Bendis seems to have turned him into Jesus. Or God. Or something. I can't tell anymore. Or care anymore. Which begs the question, why will I be buying this comic? Basically, because there's only a few issues of it left before the big Avengers relaunch and I might as well have the complete series. We're a bit weird like that, us comics nerds. And speaking of comics I'll probably buy even though I'm not terribly interested in them...

Siege #3. Well, it's only four issues long, and I've got the first two, so might as well finish it up. Perhaps something really terribly fascinating will happen this issue. Probably not though. Probably just get something like this 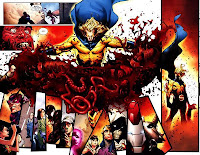 again. Yes, that is a character – Ares – being torn asunder by the aforementioned Sentry. Ain't comics neat?!

Aaaaand this week's contender for Comic I Probably Shouldn't Buy Because It'll Be Crap But I Will More Than Likely Buy Anyway Because I'm Fucking Hopeless is Superman 80 Page Giant #1. Cuz it's like eighty pages of Superman. And eighty pages means there's gotta be something in there half decent, something better than the regular Superman titles, which were turning into such an epic snooze that even I, a Superman fan who's been following the regular Supes titles for well over ten years (and on and off for another ten-plus years before that even), stopped buying them, mid-storyline. Right? Right?