A Tour Round the Bookshops of Lewes

Lewes, the East Sussex town where I live, is unusually blessed with second hand bookshops. I know them all pretty well by now, but a visitor from out of town might be slightly baffled by the array and diversity. Fear not, however: let Existential Ennui take you by the hand and lead you through the streets of Lewes, starting here: 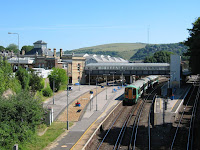 Look, that's your train pulling into Lewes Station! Neat. And when you emerge from the ticket hall, you will be here:

The two women loafing on the bench there are prostitutes. Do not speak to them unless you want your bookshop tour to go seriously off the rails. Maybe leave that for another trip... Anyway, when you emerge from the station, go right (or left if you're standing where this photographer is) along Station Road, then turn right at the crossroads down Lansdown Place (thus avoiding the climb up Station Street, which is a bastud of a hill; Lewes is all bloody hills, so any opportunity to avoid them should be eagerly taken). If you're of a mind to combine bookshops with boozing, the Lansdown Arms on the corner here's a good place to start.

Fortified or otherwise, carry on down Lansdown Place until it becomes Friars Walk, then continue down the road, past the big church on the left, all the way until you meet the start of Cliffe High Street, otherwise known as The Flat Bit of Lewes. Turn right here, trundle over the bridge spanning the Ouse, then carry on down Cliffe High Street (possibly stopping at the John Harvey Arms on the way). Keep going until you get near the end, and on your right you'll see this:

This is the Lewes Book Centre, your first port of call. It's largely a military bookshop – which means it stocks books on the military and war, not that it's serving in the military. That would be daft. As we all know, the armed forces enforce a strict 'no second hand bookshops' rule. But for the less military-minded among us it does also stock a selection of cheap paperbacks, some newish crime fiction, a good selection of second hand kids' books (including old Doctor Who Annuals) and various other odds and sods, like old issues of Commando comic. The funny old couple who run it are nice enough, if a bit twitchy, and the books can be slightly higgledy-piggledy, but they're generally grouped into categories, which is always helpful.

Once you're done here, have a look in some of the antique shops dotted along Cliffe High Street, particularly the multi-floor Lewes Antiques Centre (I think it's called) across the street. Up on the first floor there are all manner of dusty old books, from modern first editions to art books, biographies, more bleedin' military books, you name it. The charity shops are also worth a look, particularly Oxfam, as Lewes people are quite posh and therefore have decent taste in books, so you can often pick up a bargain from their cast-offs (I got a cheap hardback edition of George Pelecanos' The Way Home in Oxfam recently).

Next, wander back along Cliffe High Street towards the bridge. If you're hungry at this point, I'd recommend going here:

Bill's, possibly the best cafe in Lewes. Go for the Bill's Breakfast (served all day). You won't be disappointed. If you can still walk after that, cross back over the bridge and head for the hill you can see in front of you (you can stop in WHSmiths if you like, as they do stock books, but really, you know what lies await in there, and it'll only depress you). This is Lewes High Street proper, otherwise known locally as School Hill, for reasons which continue to elude me, there being no school anywhere near it. Walk up the hill, passing the various clothes shops and cafes (although perhaps stopping in Octave, which is a decent record shop) until you get to Sussex Stationers/British Bookshops. This is essentially Lewes' only 'new' bookshop. There's WHSmiths, and there's another little one we'll come to in a moment, but those aside, this is the place for new hardback novels and the like. It does have a fairly good selection actually, and it's cheap, so you never know: there may be something for you here (I bought a really cheap first printing hardback of Peter Hook's The Hacienda in here earlier this year – and it was signed by Hooky!).

From here, cross over to the war memorial and look back down School Hill. You'll see a lovely view, a bit like this: 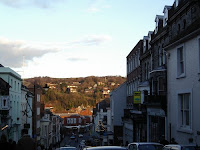 only much nicer. The funny obelisk thing you'll be able to see on the Cliffe, er, cliff is not, in fact, another war memorial, but a memorial to the Protestant martyrs who were burned outside the Star Inn, which is now the town hall, just behind you to your left. A nasty business that, but Lewes is a contrary place at the best of times, and where other towns might prefer to forget such an event, the townsfolk here instead use it as the basis for an evening of fun and frolics, marching through the streets hefting burning crosses and setting fire to the Pope. But that's a tale for another time...

From the war memorial, cross over the road and head down Market Street. Turn left onto Market Lane, then right through the car park and you'll find yourself here:

This is the Needlemakers. Here you'll find that other new bookshop I mentioned above, and various boring craft shops. Our real reason for visiting, however, is downstairs in the basement... That's where you'll discover a treasure trove of tat, comprising thousands of old books, magazines, comics, clothes, postcards, posters... It has to be seen to be believed. Lots of first editions down here, as well as old paperbacks (Pan, SF, etc.) and sundry other items. You can easily spend a good hour or so rummaging through the piles.

Once you emerge blinking from the gloom, you can either pop round the corner to Market Street again and have a look in the big flea market there (where you'll find a load of books right at the back, although it's generally rubbish), or stroll back across the car park to Market Lane and carry on the way you were heading, towards Fisher Street. Turn left onto Fisher Street, walk along until you get to the crossroads, then turn right back onto the High Street. A minute or so along on the right hand side is this:

The Bow Windows Bookshop. We're now getting into the hardcore Lewes bookshops. These are yer serious collector emporiums, and all have their own particular (and peculiar) idiosyncrasies. Bow Windows is probably the nicest-looking one, and has the most attractively presented stock, although I have seen said stock described online as "mutton dressed as lamb", which is slightly unkind. It's probably fair to say the books can be kinda pricey, but you get what you pay for. They have a great selection of modern firsts, lots of local interest books, topography, books on Virginia Woolf and the Bloomsbury Group, art books, and more besides. The staff are quite nice, but it can be a little intimidating in there, kind of like a Cecil Court shop relocated to Lewes. Even so, this is one of Lewes' finest.

From here, turn right onto the High Street again, walk another couple of minutes, past the castle on your right, and you'll see this on the other side of the street: 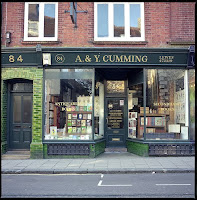 A & Y Cumming. Another big selection of modern firsts, local books and so on here, as well as lots of paperbacks of the Penguin variety. There's also a basement, which they don't really shout about, so ask the person behind the till. Unlike Bow Windows the stock is rather more attractively priced, and you can often turn up cheap book club edition Bond novels and the like, alongside yer Graham Greenes and co. Once you've finished here, turn left onto the High Street again and head towards what's known as the bottleneck, for obvious reasons. Here is the final (or is it...?) stop on your tour: 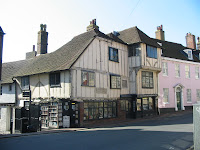 The infamous 15th Century Bookshop. Well known throughout this part of the world for its crotchety French owner, the 15th Century Bookshop is an utterly ramshackle old place heaving with everything from modern firsts to a massive load of children's first editions, old crime paperbacks, transport, art, biography, all rammed onto shelves and piled high on the floor. The owner gets a bum rap, but he's always been rather nice when I've been in there, although the signs stuck on the shelves telling you "DON'T TOUCH" can be a tad off-putting. Take your time in this one, explore every nook and cranny (not forgetting the shelves behind the till) and you're bound to stumble across something interesting. I bought a first of Kingsley Amis/Robert Markham's Colonel Sun in here for a fairly good price after a spot of light haggling, so don't be afraid to name your price.

And that's pretty much your lot. But wait! There is one more bookshop that, if you're lucky, might be open. From the 15th Century Bookshop, head back the way you came, and when you see Tom Paine's old house (there's a plaque outside it), cross the road and head up the tiny Pipe Passage. 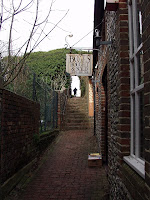 On the right you'll see a little shop with books inside it. This is actually the offices of the local listings magazine, Viva Lewes, but the books you can see are for sale, so if the lights are on, try the door. You'll be rewarded by another nice lot of modern firsts and, upstairs, biographies and the like. Everything is very competitively priced, so give it a whirl.

And that really is that. If you're still not satisfied, there are more charity shops along the High Street, and also Rik's Disks on Station Street, which is a second hand record shop but also stocks a lot of old comics, many of which were sold to the proprietor by me during one of my big clearouts, so I know there's some okay stuff in there. I'll be having another clearout soon, so if you likes your comics, give it a few weeks and have a look. Or just send me a message directly and I'll tell you what I'm selling. Good hunting!

(Apologies for all the photos I nicked for this post. It's all for the greater good, but I'm happy to throw in some links if required.)

(Actually I have forgotten one shop – Bags of Books down the end of Cliffe High Street. But it's a children's bookshop, so unless you have kids or are a passing pervert, I doubt there'll be much there for you.)
Posted by Nick Jones (Louis XIV, the Sun King) at 08:22