I've documented most of the early–mid 1980s Gerry Conway/Doug Moench/Don Newton/Gene Colan et al Batman and Detective Comics, er, comics I've collected – in fact have pretty much finished collecting; just the elusive (and pricey) Batman #386 from Moench's run left to secure – since the start of the year, but I've been picking up lots of other 1980s comics besides – not to mention turning up ones I'd forgotten I even had... 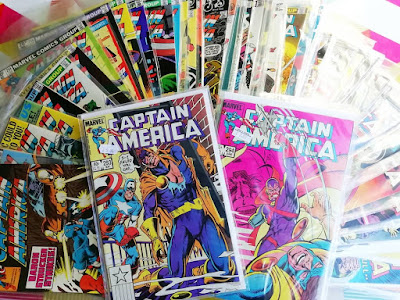 Somewhere, sometime – no idea where or when but it must have been a good few years before this latest collecting frenzy – I'd somehow conspired to collect (or rather re-collect; I originally had them back in the 1980s) a good number of J. M. DeMatteis and Mike Zeck's Captain America comics (plus the preceding short stint by Roger Stern and John Byrne). With my fervour for '80s comics reinflamed this year, it seemed the right time to collect the post-Zeck DeMatteis Caps as well, which I duly did at a London comic mart, with a couple of stray issues from Dave's Comics in Brighton. 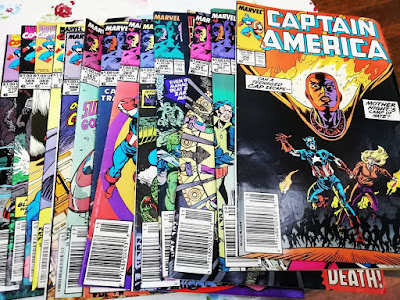 To those I added a run of late-1980s Mark Gruenwald/Kieron Dwyer Caps, which I came across at the Lewes Book Fair. I've not read those ones before, so I'm interested to find out what they're like. 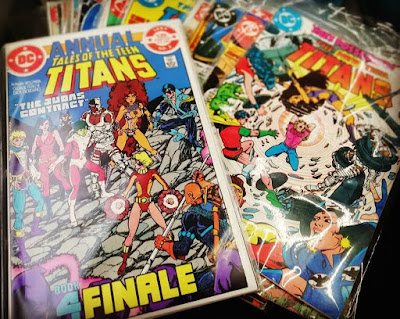 Something I have read before, in large part, is George Perez and Marv Wolfman's New Teen Titans, and again in Brighton, in the basement of the ramshackle, aptly-named Raining Books (previously Rainbow Books) on Trafalgar Street I found a stack of cheap copies from early in the run. Courtesy of Dave's Comics I filled in some gaps, and then on eBay I secured a run of issues #3–15... 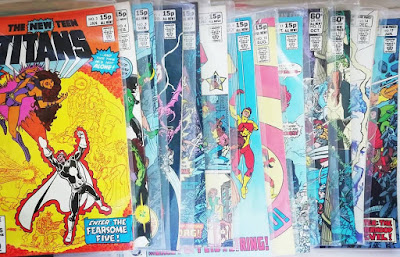 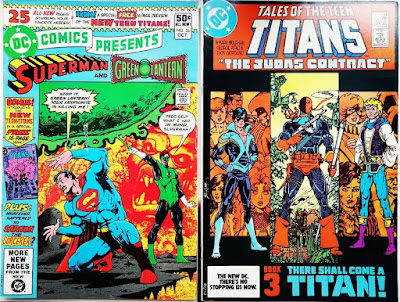 Then in Scorch Comics in Eastbourne, for just a tenner, I scored the first issue of the series: 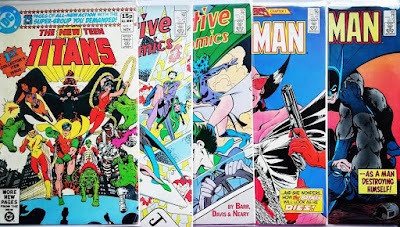 (plus some Mike W. Barr/Alan Davis Detectives, and a couple of post-Moench Batman issues), meaning I now have a near-complete run of #1–50 (missing just #2, the pricey first appearance of Deathstroke). 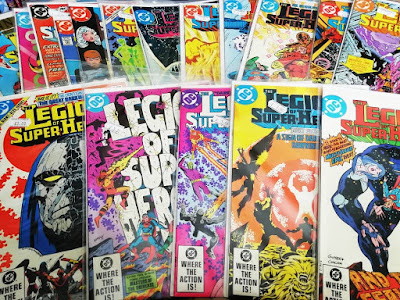 Once again from Dave's in Brighton, I bought a run of Paul Levitz and Keith Giffen's Legion of Super-Heroes – some from the 50p dump bins, some from the general back issue bins – including the celebrated "Great Darkness Saga" – plus most of the Legends-tie-in Cosmic Boy miniseries... 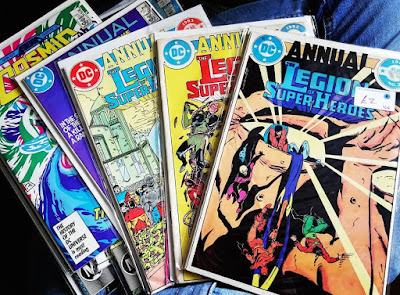 ...the sole remaining issue of which I subsequently picked up in 30th Century Comics in Putney, along with the first four Legion Annuals. While I was there, I also bought the issues I was missing from Steve Engelhart and Joe Staton's Millennium miniseries, some of which I'd already found in those aforementioned Dave's Comics 50p dump bins.... 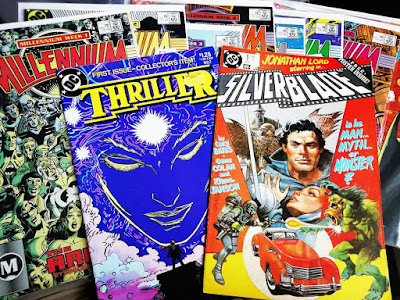 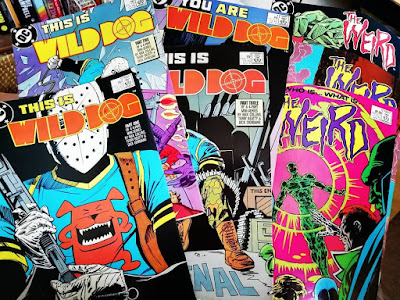 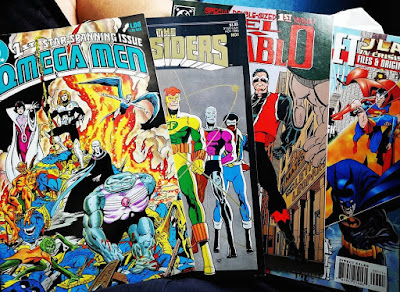 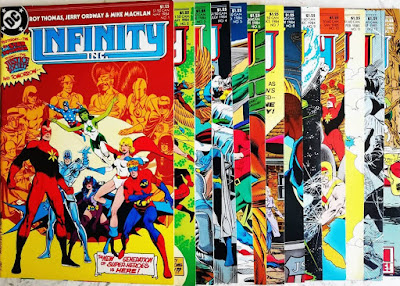 Further afield, in the Cartoon Shop in Basildon, I came across a cheap set of the first 13 issues of Roy Thomas and Jerry Ordway's Infinity, Inc... 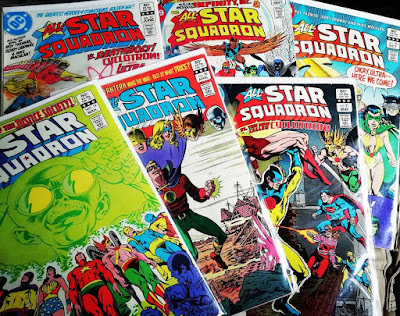 ...which was handy, because I've also been collecting the "Ultra War" storyline from Roy Thomas and Jerry Ordway's All-Star Squadron, which features the first appearance of Infinity, Inc. 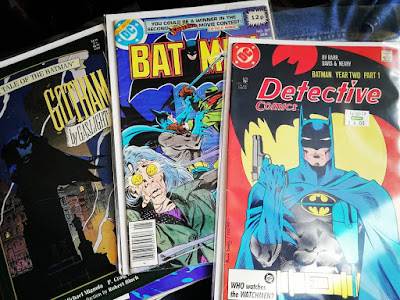 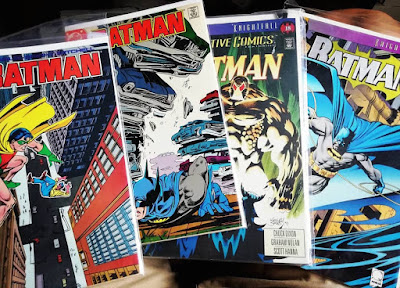 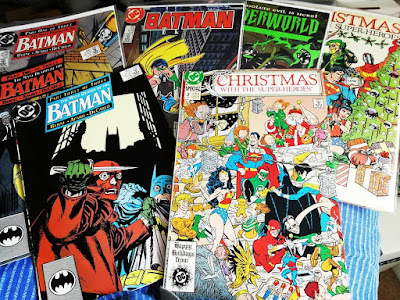 And, inevitably, there have been more issues of Batman and Detective, too – from Mega City Comics (Brian Augustyn and Mike Mignola's Gotham by Gaslight, the first Elseworlds title), 30th Century Comics (Batman #307, the first appearance of Lucius Fox), Gosh! Comics (Detective #575, the first part of "Batman: Year Two", which completes my run of Barr/Davis Detectives), Dave's Comics, and Scorch Comics (where I also scored DC's two-issue Christmas with the Super-Heroes, the second issue of which features stories by Paul Chadwick, Eric Shanower and Colleen Doran) – not least, and returning to my earlier comment about turning up comics I'd forgotten I had, these: 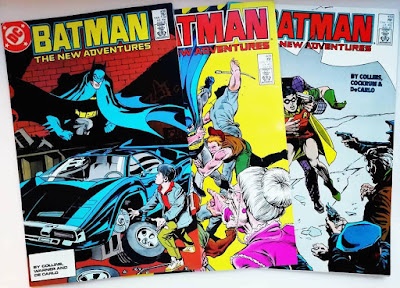 Batman #408–410 by Max Allan Collins, Chris Warner, Ross Andru and Dave Cockrum (in which, post-Crisis on Infinite Earths, Jason Todd, the second Robin, is reimagined as a juvenile delinquent rather than a circus acrobat – comics, eh?), which I came across in the loft whilst hunting for something else, and which I have no idea where (or when) they came from. A turn up for the (comic) books indeed.
Posted by Nick Jones (Louis XIV, the Sun King) at 10:30