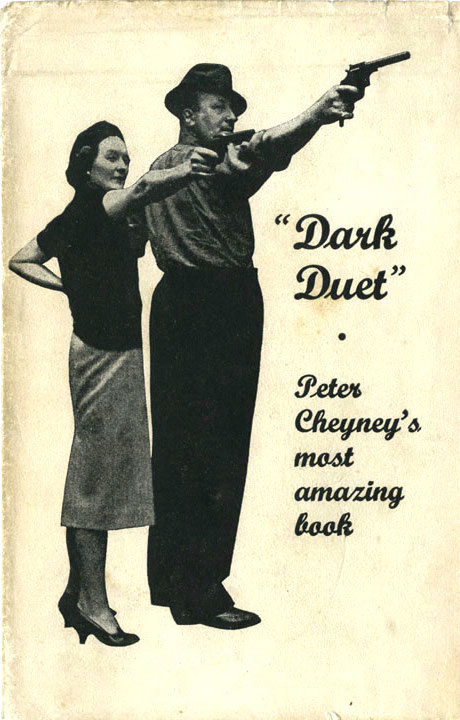 From 1942 until 1950 (the year before his death), British hard-boiled crime writer Peter Cheyney published an eight-book series of spy novels – the "Dark" Series. The novels detail the exploits – both wartime and postwar – of a rotating cast of counter-espionage agents of British Intelligence, notably Michael Kane and Ernie Guelvada, along with their boss, Peter Quayle. All were first published in hardback by Collins in the UK, as follows:

I blogged about a signed limited first edition of the fifth one, Dark Hero, last week, as part of a periodic run of posts on signed books, but I've also been picking up first and other editions of some of the other instalments in the series here and there over the past couple of years. I'm still missing two of them – The Stars are Dark and Dark Interlude – but since I'm not in any special hurry to plug those gaps in my collection, and seeing as I'm on the subject of Cheyney, I thought I'd gather the ones I do own together in a "Dark" Series gallery post, with links in each instance to the relevant pages on the Official Peter Cheyney Website. Like so: 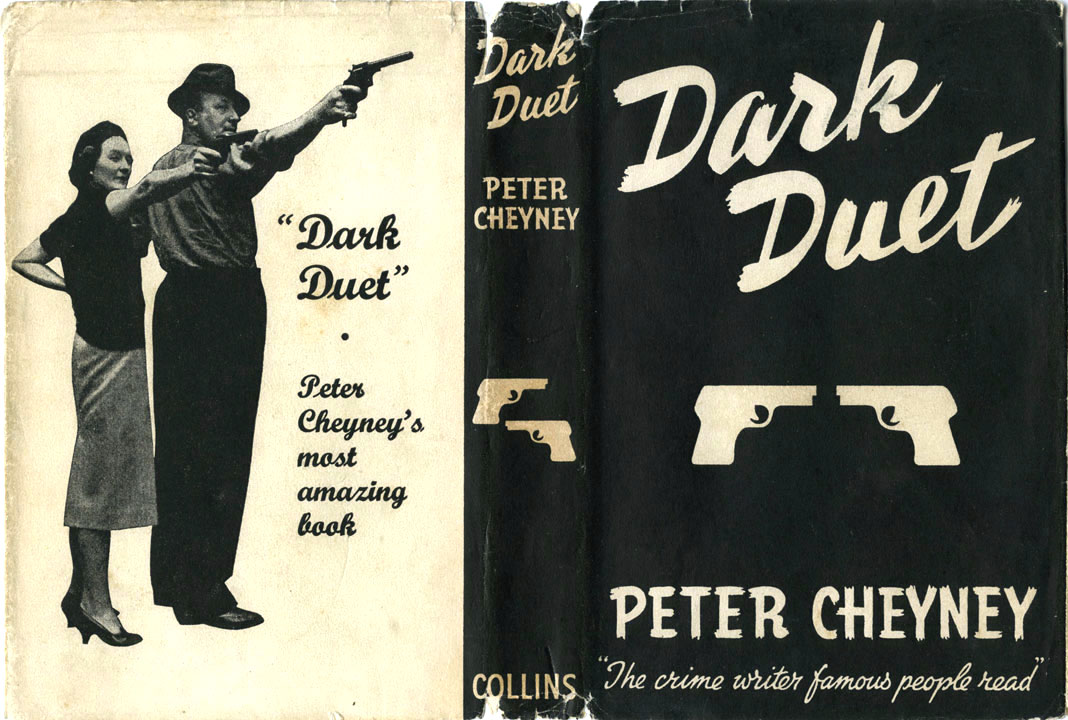 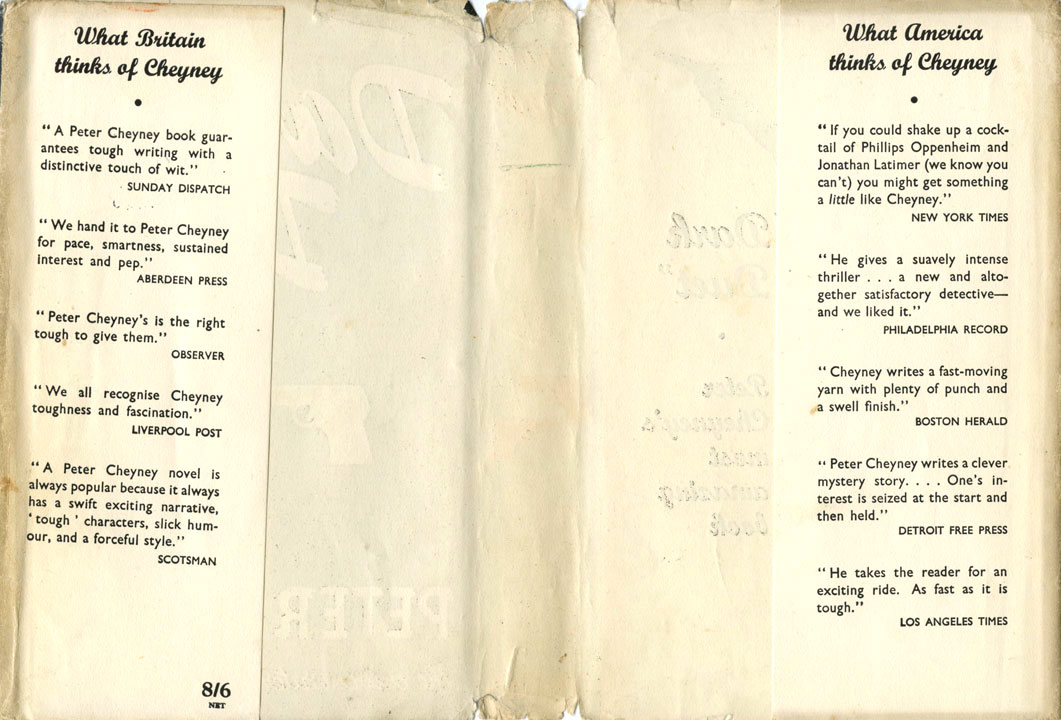 Dark Duet, Collins hardback, 1942
The Collins first edition/first impression of the debut "Dark" novel is quite a rare book; I nabbed this copy on eBay a couple of years ago, but there are at present fewer than half a dozen copies of the Collins first edition/first impression available online. The dust jacket design is uncredited, in common with all the Collins editions of the Cheyney novels I own, but that's a great photo of Cheyney and, I believe, his second wife, Kathleen Nora Walter (nee Taberer), on the back. 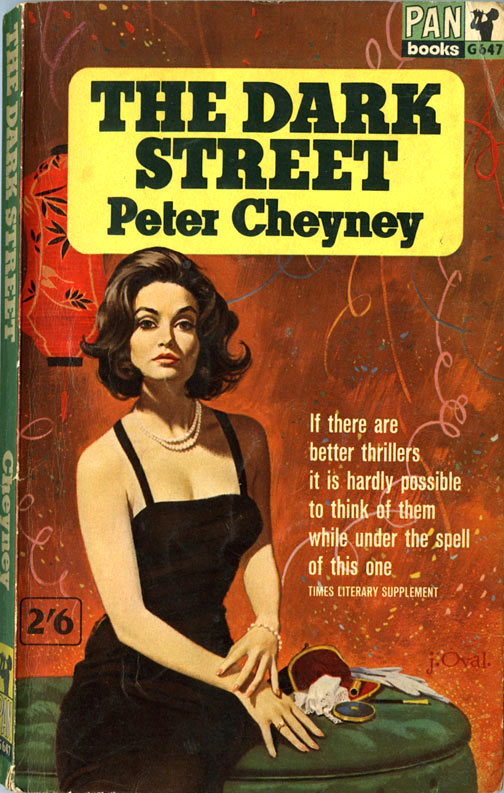 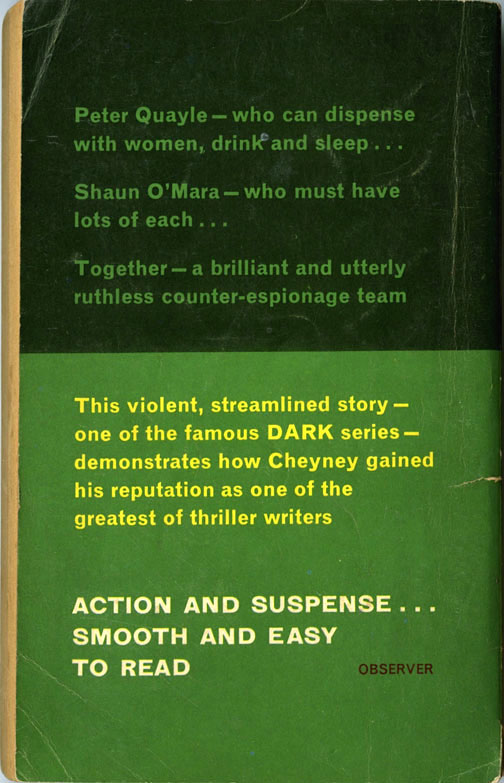 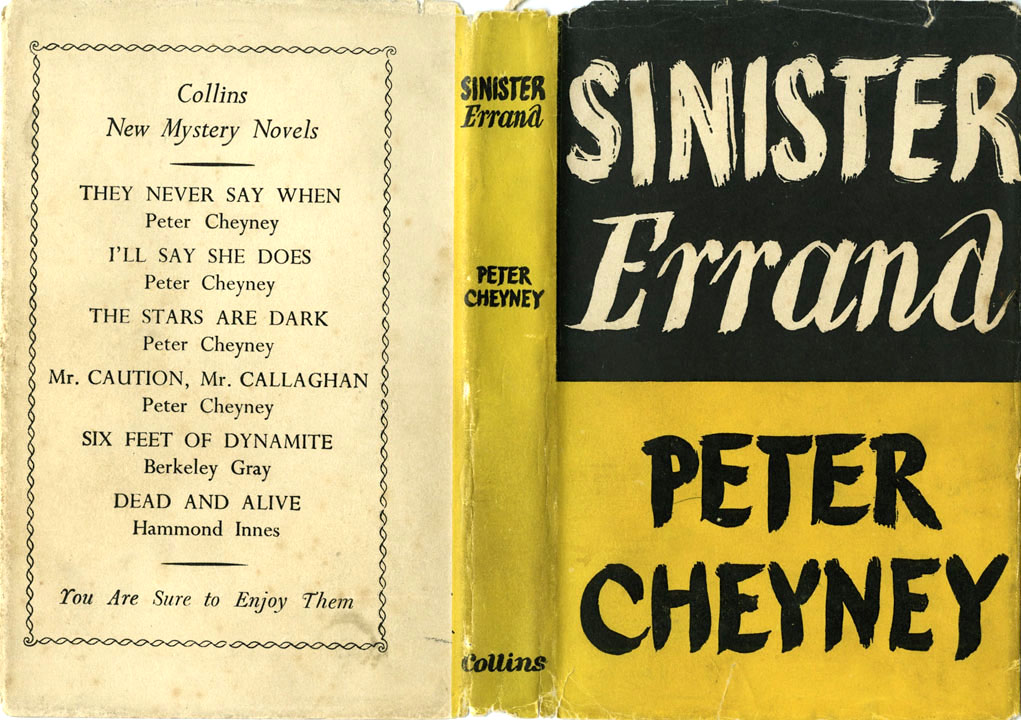 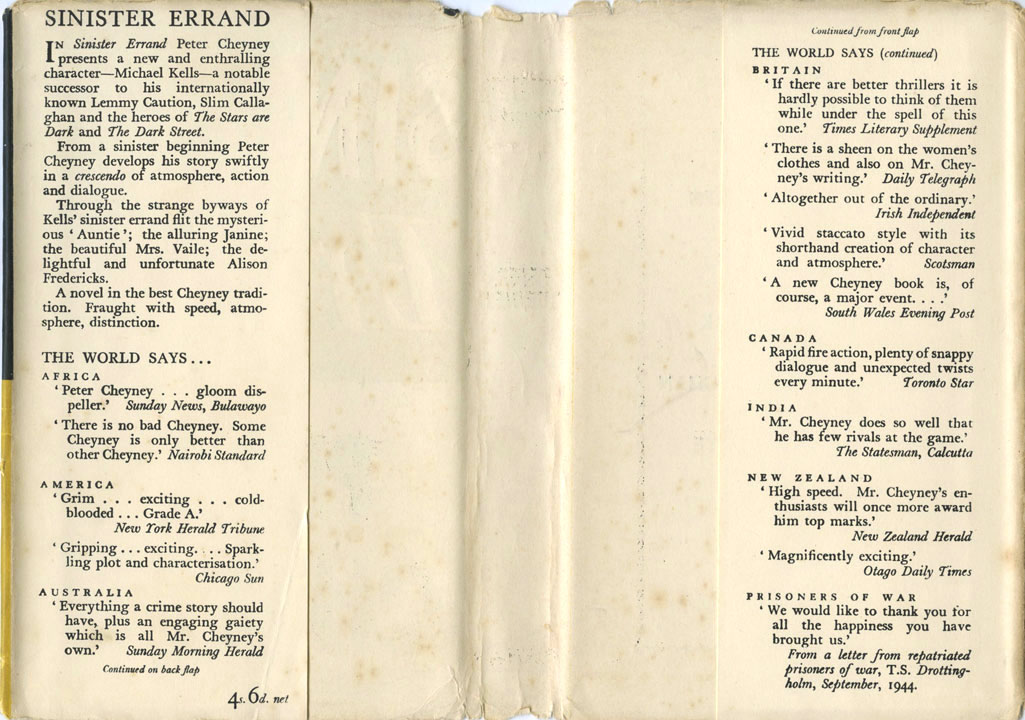 Sinister Errand, Collins hardback, 1947 (originally 1945)
I have a feeling I was under the impression when I bought this copy of the fourth "Dark" novel a few years ago online that it was a 1945 first edition. On closer inspection, however, it turned out to be a 1947 edition (printed in the Netherlands); note the reviews of the novel itself on the jacket flaps – always a giveaway that a book is a later impression. 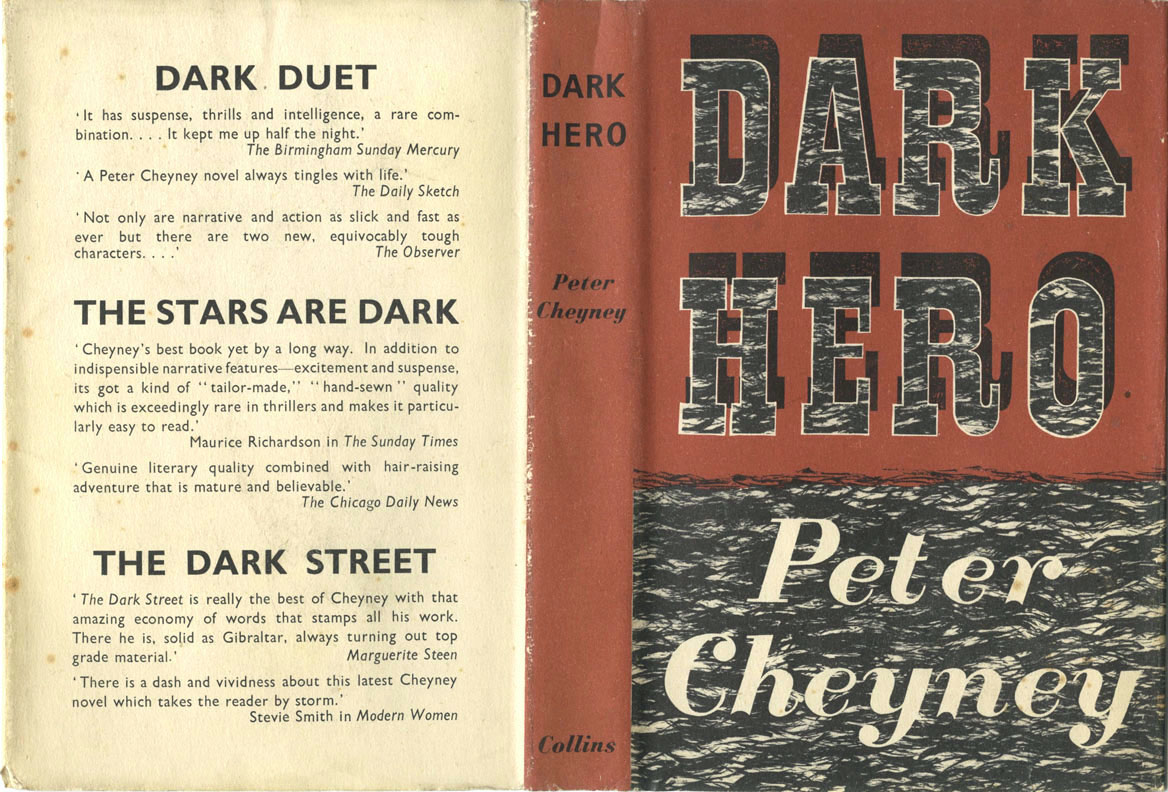 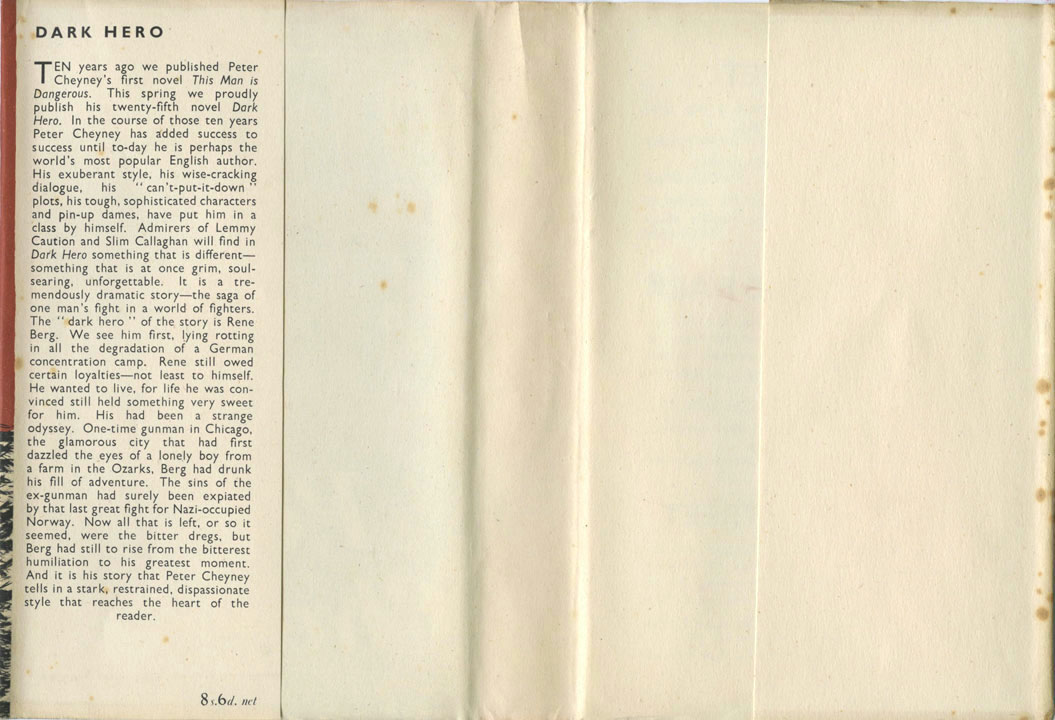 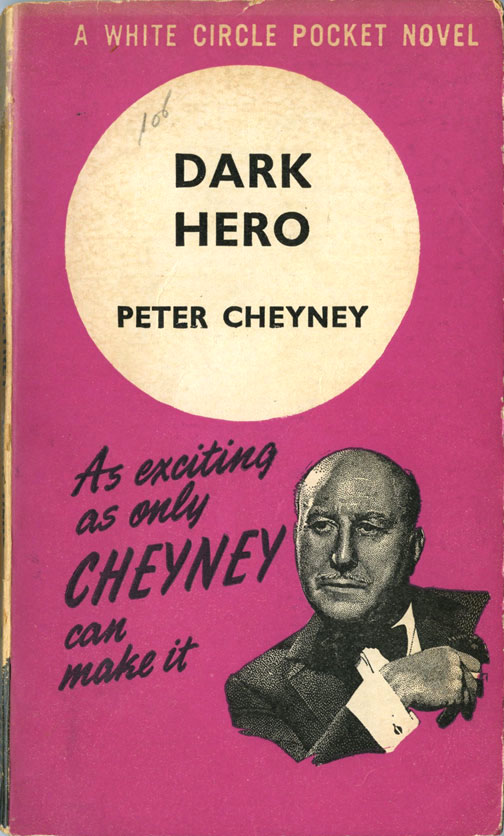 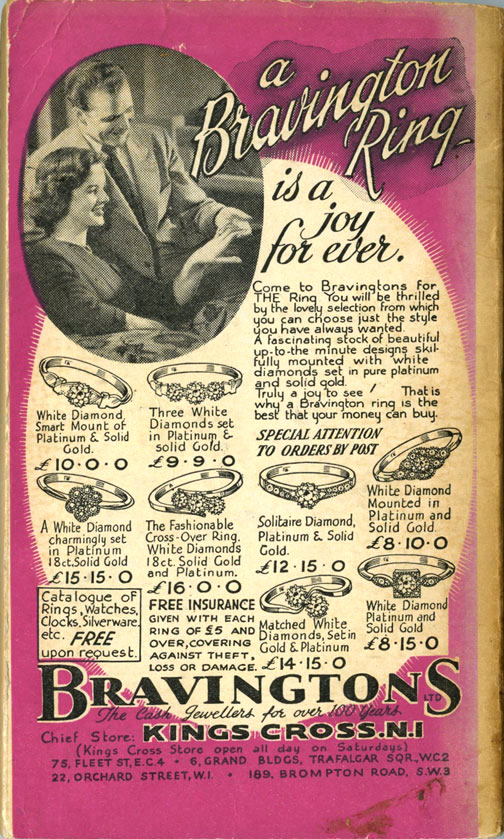 Dark Hero, Collins hardback, 1946 / Collins paperback, 1950
Dark Hero I blogged about last week, but as well as the wrapper of the Collins first edition I've also included here the cover of the 1950 Collins paperback, published as part of their White Circle "pocket" range. Splendid Bravington Rings advert on the back cover there. 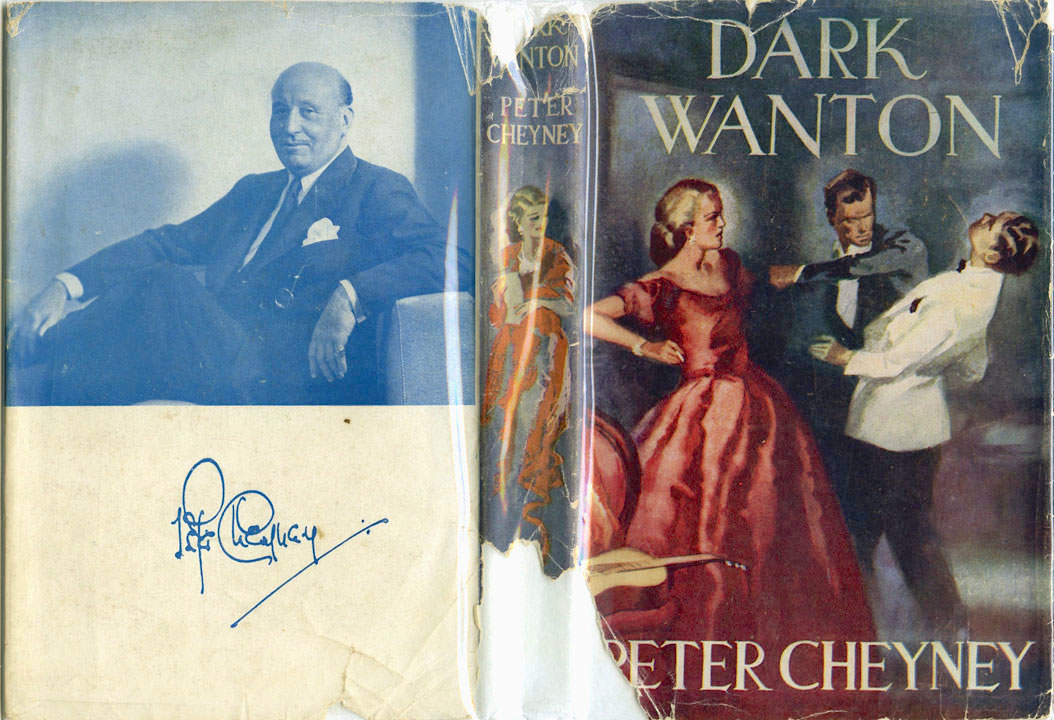 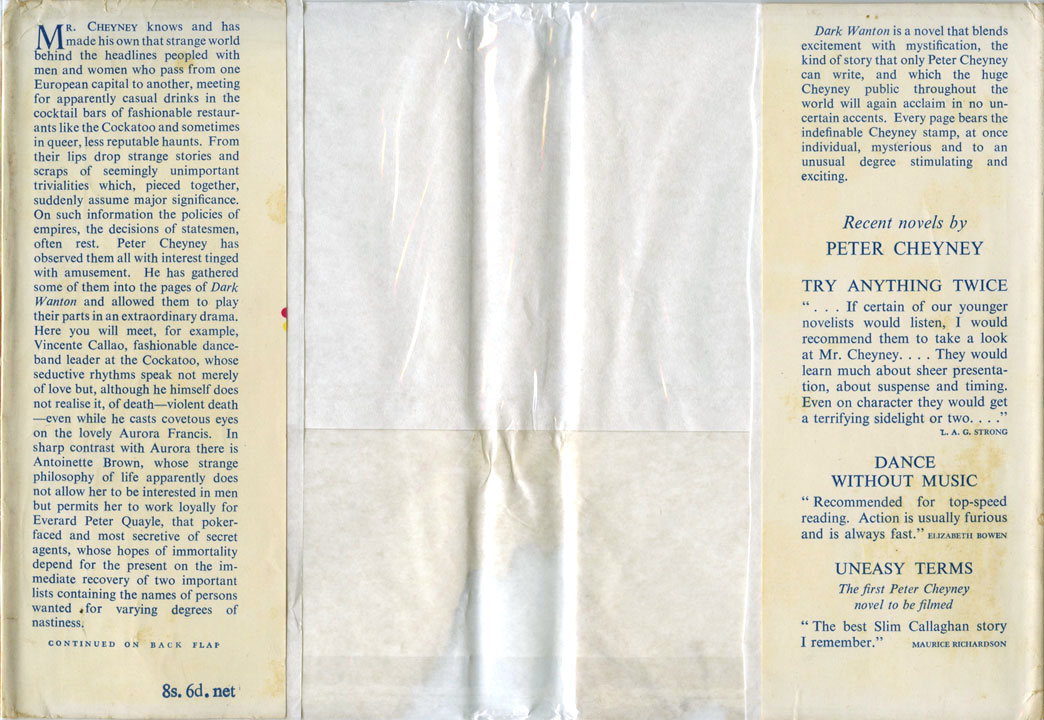 Dark Wanton, Collins hardback, 1948
This copy of the Collins first of the seventh "Dark" novel came from Badger's Books in Worthing – a fine secondhand bookshop to spend an hour or two in, if you're ever that way. The jacket has seen better days, but then I don't think I paid more than three or four quid for the book. 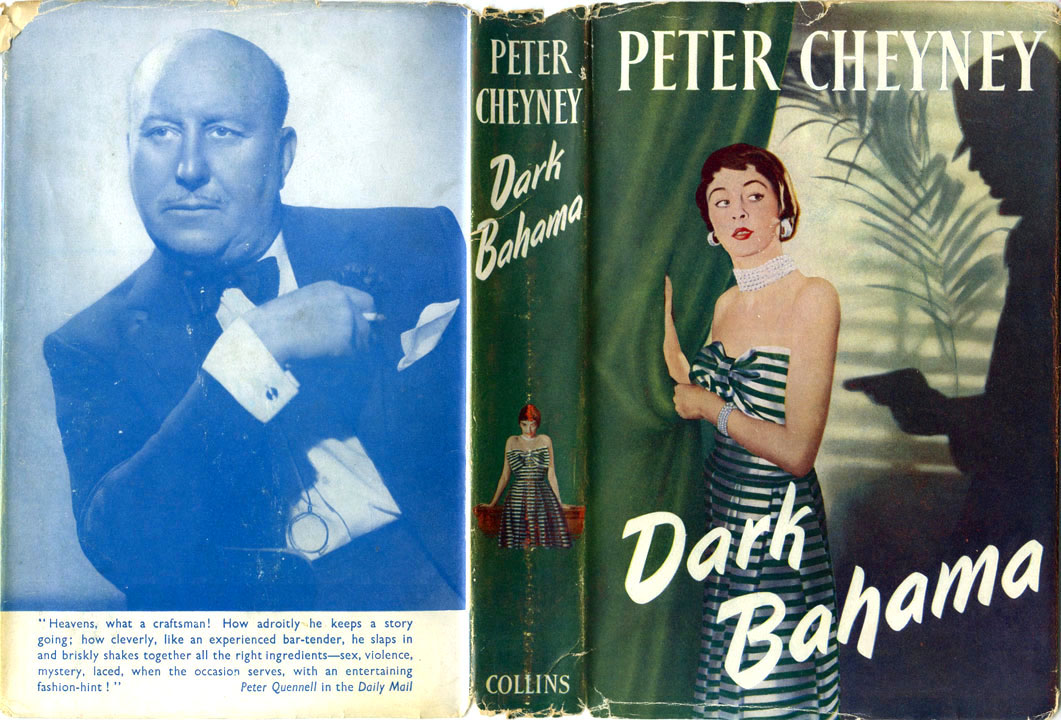 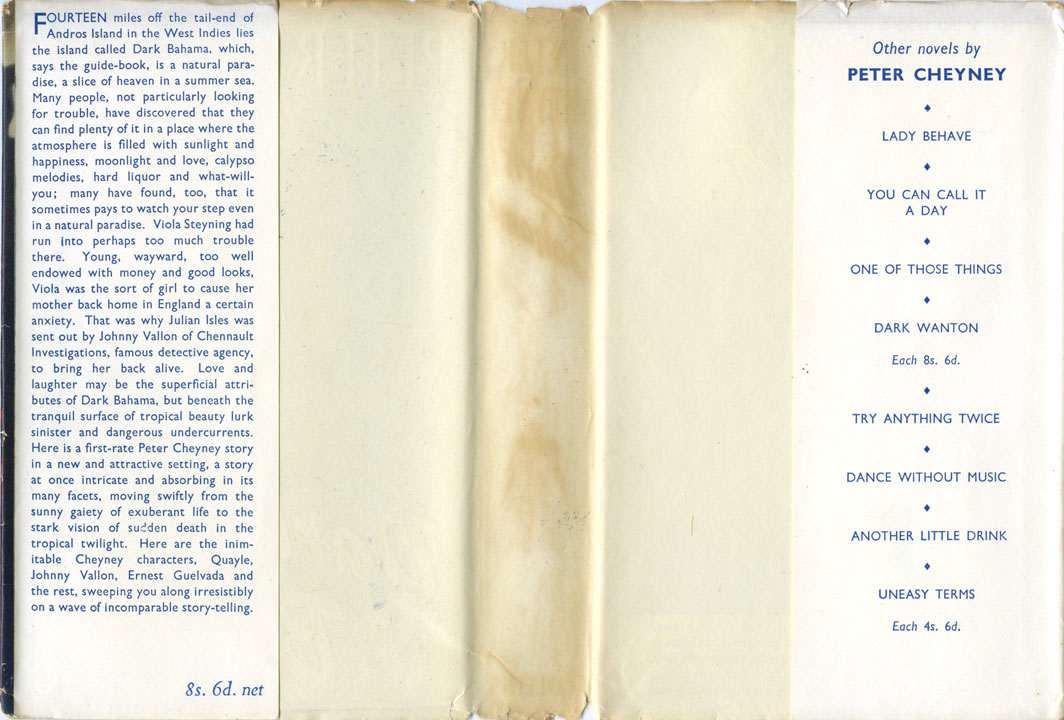 Dark Bahama, Collins hardback, 1950
Finally, there's this, my most recent Cheyney acquisition: a first edition of Dark Bahama, which I bought last year in Othello's in Essex at the start of the Jones–Day family holiday; follow this link for the first in an interminable series of increasingly daft posts about that holiday.
Posted by Nick Jones (Louis XIV, the Sun King) at 08:15