Anyone who's taken a gander at the Existential Ennui Beautiful British Book Jacket Design of the 1950s and 1960s gallery should recognise this dust jacket: 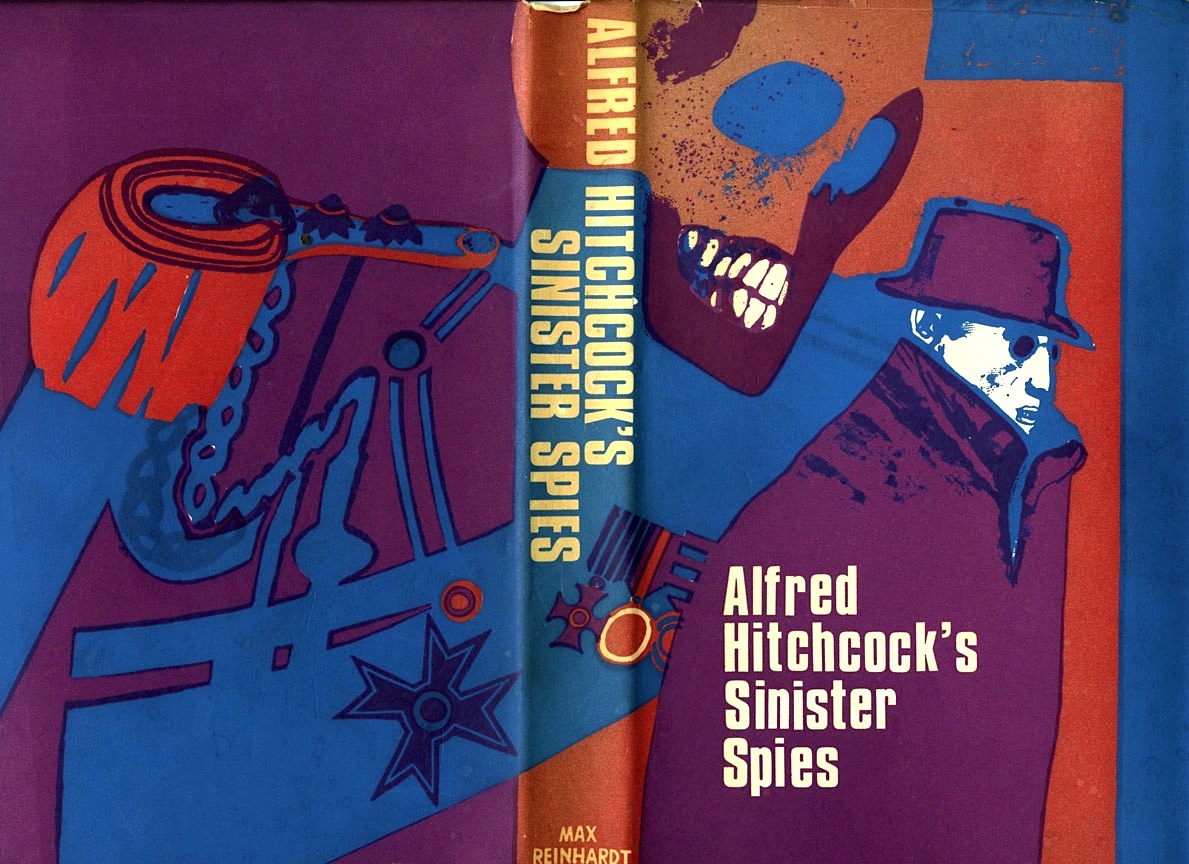 Or at least the front of it; I added it to Beautiful British Book Jacket Design in the gallery's very early days, in the second batch of book covers, I believe. Designed by Jim Russell, it wraps the British first edition of the short story collection Alfred Hitchcock's Sinister Spies, published by Max Reindhart in 1967. I bought this copy in Colin Page Antiquarian Books in Brighton (I think) a few years ago, took a picture of the cover for Beautiful British Book Jacket Design, and then didn't really look at the book again properly until late last year, when I noticed that the Michael Gilbert short story within, "The Uninvited", starring Gilbert's quietly lethal middle-aged secret agents Daniel Calder and Samuel Behrens, didn't appear to be in either of the two Calder and Behrens collections – Game Without Rules (1967) and Mr. Calder and Mr. Behrens (1982). Accordingly I got quite excited, thinking I'd found a "lost" Calder and Behrens tale (and emailed fellow enthusiast Book Glutton to that effect)... until I realised that it was merely one of the stories in Game Without Rules, "A Price of Abyssinia", under another title. 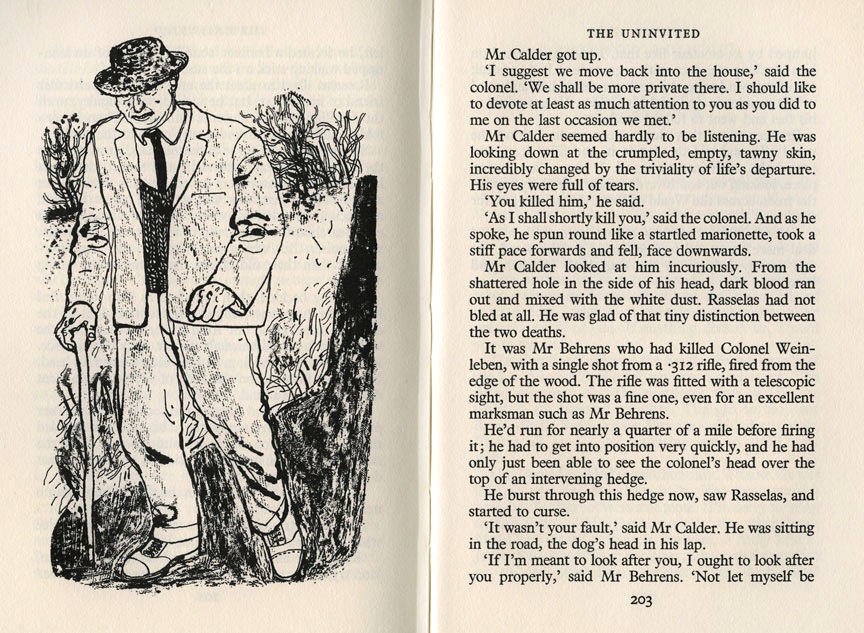 Except not quite: having compared the two – which is the kind of stupendously dreary thing I do when left to my own devices – I've found that there are differences between them, or at least between "The Uninvited" and the version of "A Price of Abyssinia" in my copy of Game Without Rules, which is the British first edition, published in 1968, the year after the US Harper and Row edition of Game Without Rules, and indeed the year after Alfred Hitchcock's Sinister Spies. Evidently someone – either Gilbert or his editor – did some minor rewriting of the story, presumably for (the British edition of) Game Without Rules, although I guess it's conceivable the rewriting was done for "The Uninvited" and "A Price of Abyssinia" is presented as it originally appeared (in Ellery Queen's Mystery Magazine most likely). In any case: largely it's things like serial commas – used much more sparingly in British publications than American ones – which have been altered, but there are more noticeable changes too. Take the opening paragraph or so. Here's how it appears in Alfred Hitchcock's Sinister Spies:

Mr Calder was silent, solitary and generous with everything, from a basket of cherries or mushrooms, to efficient first aid to a child who had tumbled. The children liked him. But their admiration was reserved for his dog.

The great, solemn, sagacious Rasselas was a deerhound. He had been born in the sunlight.

Now here's how it appears in Game Without Rules (the emphasis is mine):

Mr Calder was silent, solitary and generous with everything, from a basket of cherries or mushrooms to efficient first aid to a child who had tumbled. The children liked him. But their admiration was reserved for his deerhound.

Rasselas had been born in the sunlight.

To pick another example, here's a description of Colonel Weinleben, Calder and Behrens' opponent in the story, from Sinister Spies:

He was greatly inferior to the dog, both in birth and breeding.

And the same description in Game Without Rules:

He was the illegitimate son of a cobbler from Mainz and greatly inferior to the dog, both in birth and breeding. 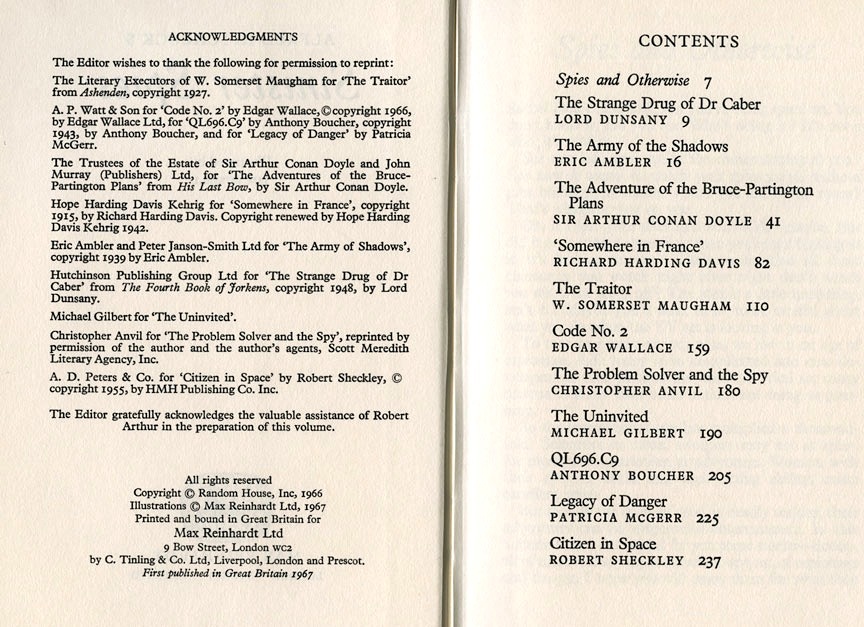 I suppose it's a matter of personal taste as to which you prefer – my preference is for the Game Without Rules version – but it does shed light on how stories can change from publication to publication. However, I do have an additional point which I'm edging towards here, which is that as a result of noticing these differences I was minded to take a closer look at Sinister Spies and read some of the other stories within (each of which is accompanied by a Jim Russell illustration). There's a perfunctory introduction by Hitchcock, a very good Eric Ambler story – more on him anon – and a handful of other stories that are worth a look, but the one that proved a real revelation for me was "The Traitor" by W. Somerset Maugham. 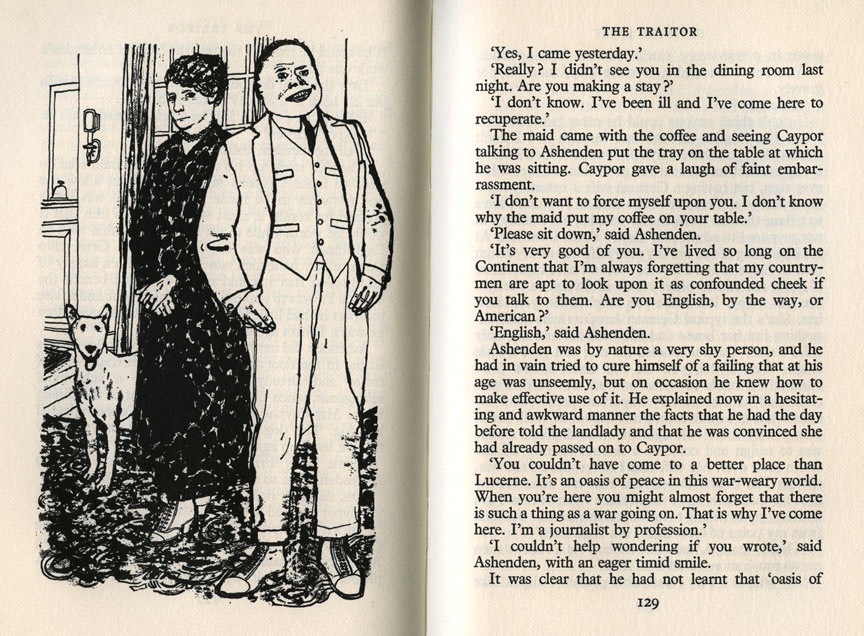 This, I discovered, is one of the loosely linked stories which make up the book Ashenden, or, The British Agent (Heinemann, 1928), which together detail the World War I exploits of Ashenden, novelist turned spy, based on Maugham's own experiences. Not that much of that can be gleaned from "The Traitor": there's no introduction to the story in Sinister Spies, and Ashenden's parallel career as a man of letters isn't mentioned. Regardless, even read in isolation "The Traitor" stands as one of the best pieces of spy fiction I've ever come across – almost languorous in pace and yet packing an emotional punch that's uncommon in the field of espionage writing (John le Carré's Karla Trilogy comes to mind as a useful comparison).

Sent to Lucerne in Switzerland by his boss at British Intelligence, R., in order to convince Grantley Caypor, an Englishman who's been spying for the Germans, to return to Britain, Ashenden spends much of the story seemingly making very little headway in his mission, becoming mildly friendly with Caypor but otherwise idling the days away, taking pleasant naps and latterly fretting over his lack of progress. Unregistered by Ashenden, however, R. has already laid the foundations for Caypor's extraction, and Caypor's fate, even given his betrayal – and though that fate is only guessed at by Ashenden and Caypor's German wife – is vividly brought home in all its awful finality. 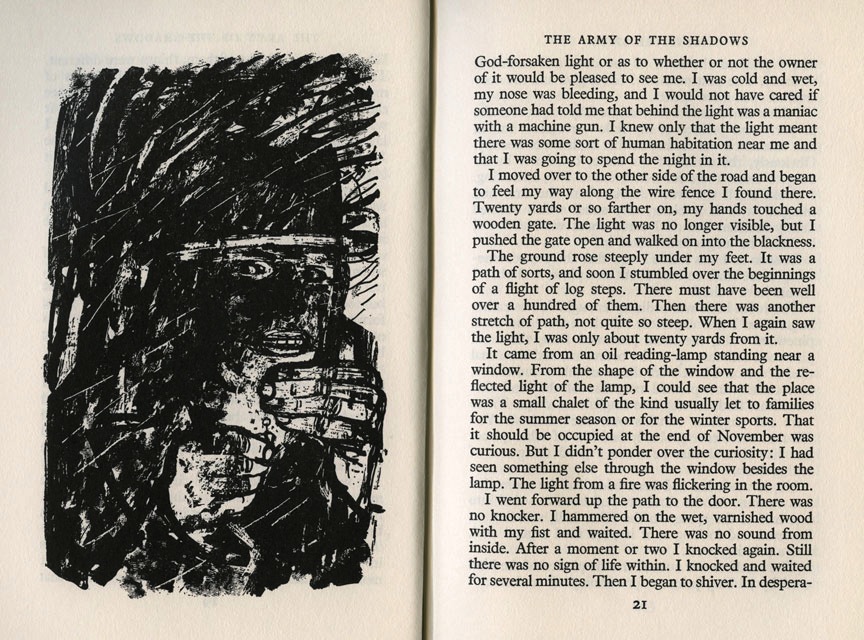 It's a beautifully judged, wonderfully written tale, and it left me eager to read further Ashenden stories – which, luckily for me, was as simple a matter as plucking another book from my shelves. Because I own another, slightly earlier anthology of short spy stories which also contains a (different) Ashenden tale – an anthology compiled by the aforementioned Eric Ambler. 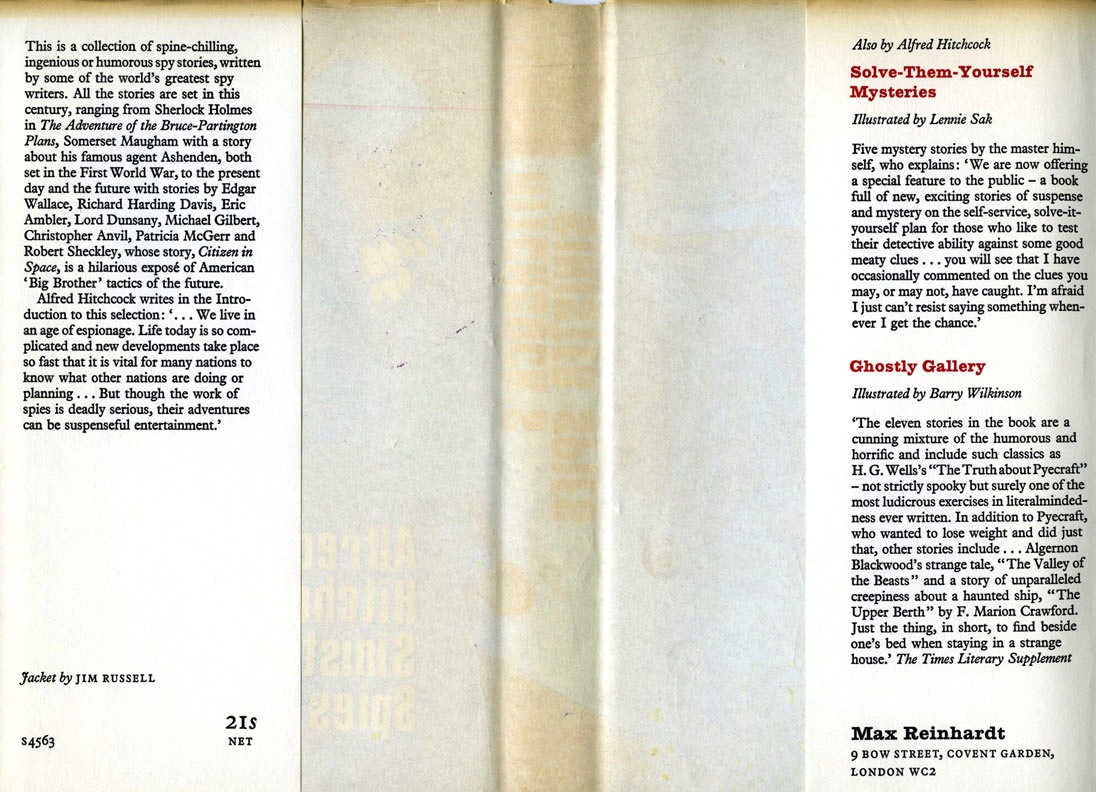