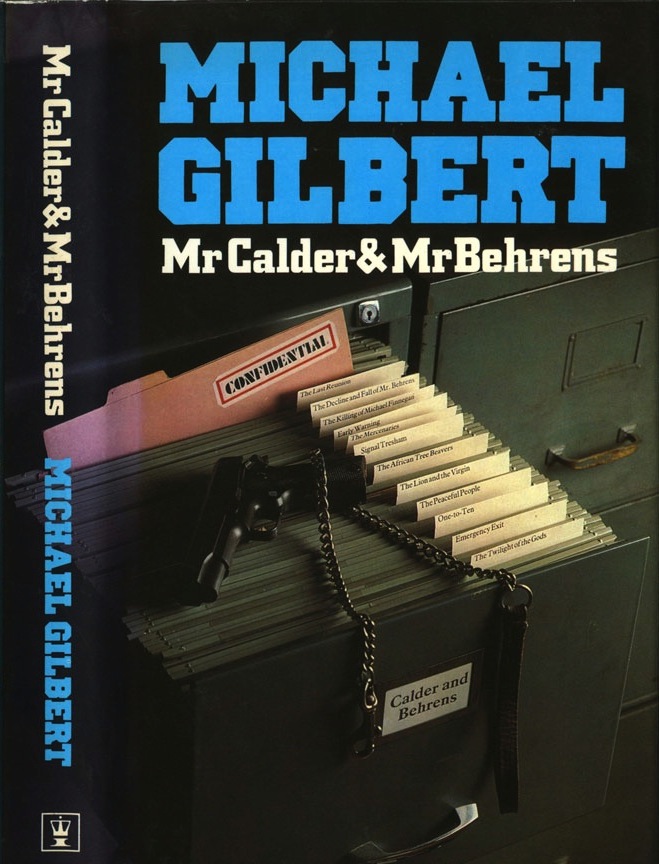 Michael Gilbert published two collections of short stories featuring middle-aged British Intelligence operatives Daniel Calder and Samuel Behrens (and their boss, Mr. Fortescue, who divides his time between dealing with threats to the state and managing the Westminster branch of the London and Home Counties Bank). The first, the brilliant Game Without Rules (Hodder & Stoughton, 1968), I read and reviewed early in 2012, rating it so highly that I eventually placed it at number two in my top ten for that year (and would have happily placed it at number one were it not for another Michael). As a consequence, despite owning a first edition of the second collection, Mr. Calder and Mr. Behrens (Hodder & Stoughton, 1982), for almost as long as I have Game Without Rules, I've sort of been saving it – some form of delayed gratification, I suppose. But the arrival of Edie in May of last year brought with it the realisation that there are only so many hours in the day, and there's little sense in my looking forward to reading something if I ultimately end up never getting round to reading it. 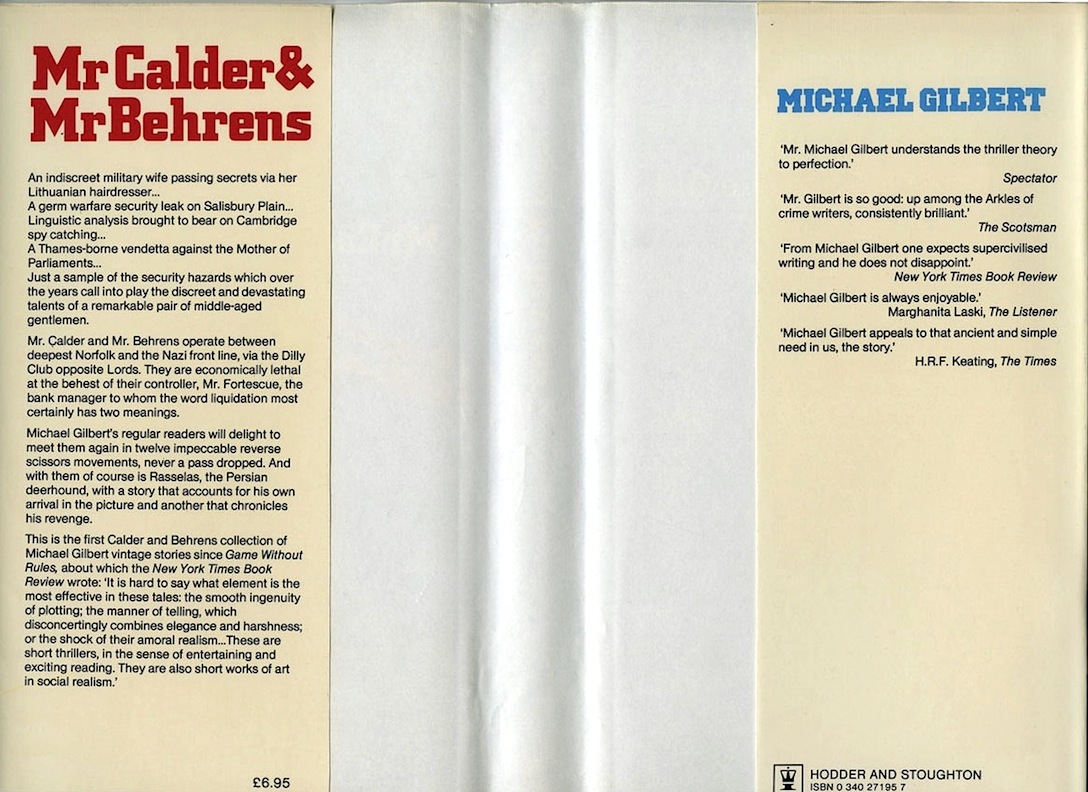 So: Mr. Calder and Mr. Behrens. As I anticipated (not entirely unaided: Olman has a review of the book at his blog), the stories in this second collection are just as good as those in the first: clipped, economical, elegantly written and drily witty. Though a fair number hew to the established format – Calder and Behrens are tasked with investigating and bringing down some traitorous type and typically approach the problem from opposite ends, meeting in the middle – there are still those that buck that trend. The opening tale, "The Twilight of the Gods", which takes us back to World War II and Behrens' role in an attempt on Hitler's life, is like a condensed forerunner of Valkyrie, although the scene where Behrens inadvertently encounters the Fuhrer could more accurately be said to prefigure the bit in Indiana Jones and the Last Crusade where Indy comes face-to-face with Hitler. The closing story, "The Last Reunion", is also Hitler themed, involving as it does Neo-Nazis and a hunt for a recording of Hitler's final message to the people of the Reich, buried at the former site of a prisoner-of-war camp. 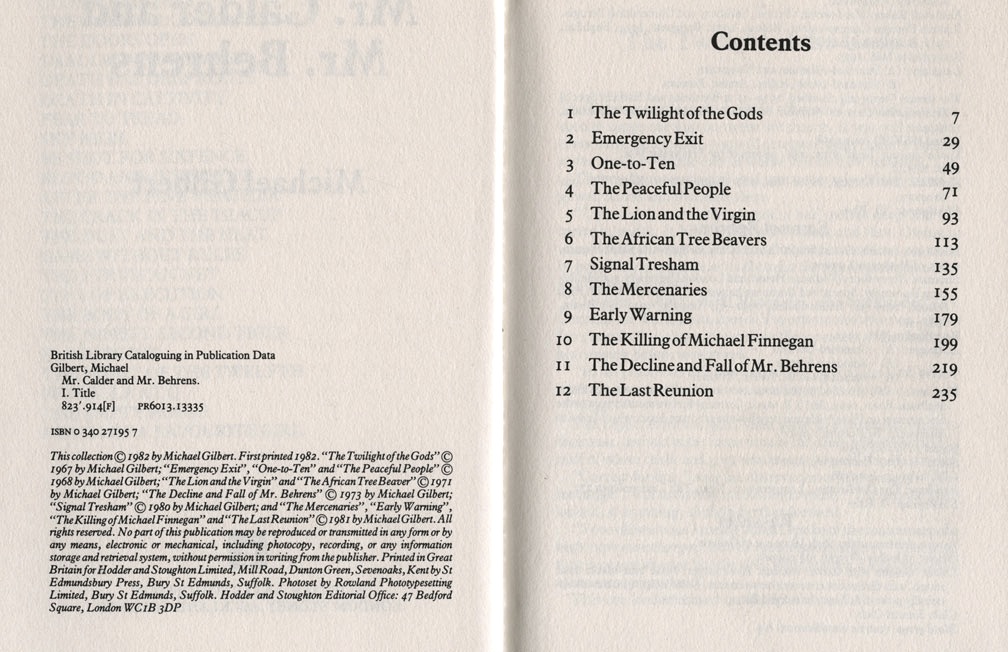 The tale I enjoyed the most is "The Decline and Fall of Mr. Behrens" – also fairly atypical, in that no one loses their life or, to any great extent, their liberty, and that Behrens, normally an (occasionally blunt) instrument of the state, turns agent provocateur, assisting a firebrand student in her struggle against the oppressive forces of the University of Middlesex (it also has an excellent payoff which turns on Behrens' Jewish heritage). It's an indication that although Calder and Behrens are very much of the Establishment, middle age has brought with it a more nuanced outlook, one which perhaps reflects Gilbert's own.

I wonder too if Gilbert's opinions can be detected in "Emergency Exit", when Mr. Fortescue informs the Under-Secretary of State that the wife of a Navy Admiral is a Communist agent, to be met by the disbelieving exclamation, "This sounds like something Security Executive has dreamed up" – Security Executive being the fictional intelligence department in the Colonel Charles Russell series of spy novels by the avowedly right-wing William Haggard.

Also in "Emergency Exit" is the hitherto secret origin of Rasselas, Calder's Persian deerhound, whose presence in a number of other stories in Mr. Calder and Mr. Behrens suggests that those stories must be set prior to "A Prince of Abyssinia" in Game Without Rules; as Book Glutton noted in an email to me, the chronology of the tales between the two collections does throw one a tad. Book Glutton also pointed out to me, when I lamented on Twitter after finishing Mr. Calder and Mr. Behrens that there were no more Calder and Behrens stories for me to read, that there are two Calder and Behrens radio plays in the 2009 Michael Gilbert collection The Murder of Diana Devon and Other Mysteries, so I shall have to keep an eye out for that.* 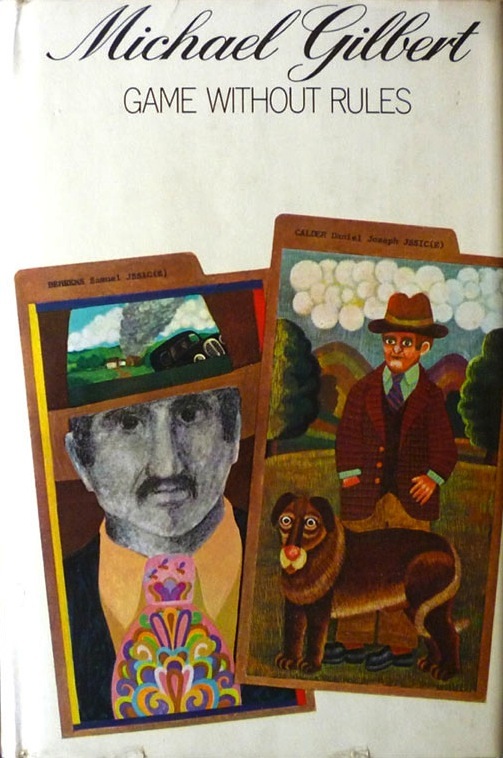 And I did for a while think that I might have found one further story featuring Calder and Behrens, in an anthology of espionage short stories – except as it turned out it was a story already in Game Without Rules under an alternate title. There are some minor differences between the two, however, and the anthology did prove revelatory to me in one other respect, so I'll be exploring all of that in the next post – unless, of course, this Saturday's Lewes Book Fair turns up anything interesting. 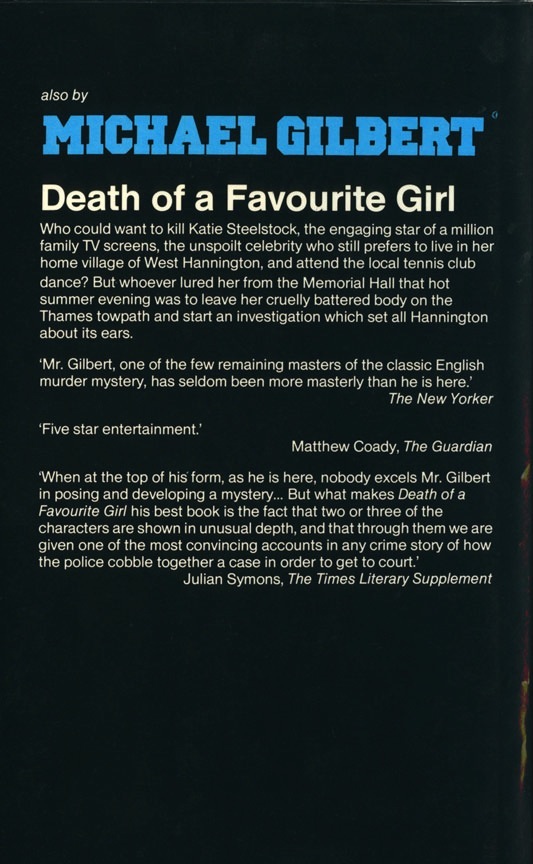 * There is also. I later learned, one further Calder and Behrens short story that doesn't appear in either Game Without Rules or Mr. Calder & Mr. Behrens; see this post for more.
Posted by Nick Jones (Louis XIV, the Sun King) at 07:00