Eric Ambler on The Mask of Dimitrios, Journey into Fear and Judgment on Deltchev: Introduction to Intrigue (Hodder, 1965)

The Eric Ambler introduction in this anthology of three of the author's novels isn't quite as expansive as that in the 1964 short story (both Ambler's and others') anthology To Catch a Spy, but it's still worth a look, I feel, if only for the amusing way in which Ambler persistently undermines the reasoning for the inclusion of the introduction. And in any case, this little-seen edition of the book is itself quite intriguing – literally, in fact. 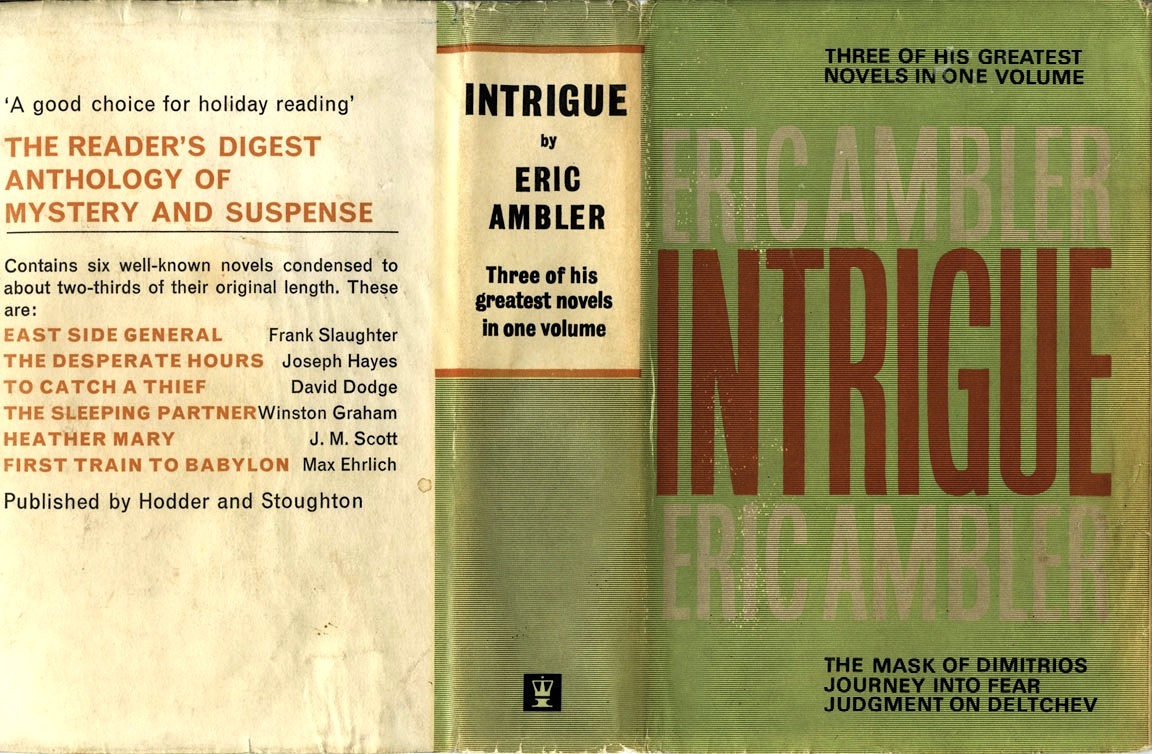 Published in hardback in the UK by Hodder & Stoughton in 1965, Intrigue collects three of Ambler's novels: The Mask of Dimitrios (1939), Journey into Fear (1940) and Judgment on Deltchev (1951). As such, it should not be confused with Intrigue, published in hardback in the US by Alfred A. Knopf in 1943 – and reissued in 1960 – which collects four of Ambler's novels: Journey into Fear, A Coffin for Dimitrios – the American title for The Mask of Dimitrios – Cause for Alarm (1938) and Background to Danger – the American title for Uncommon Danger (1937).

Now, on balance, one might suppose that an anthology containing four early Eric Ambler spy thrillers would be a more attractive proposition than one containing three early(ish) Eric Ambler spy thrillers. But in this case, to my mind, matters are not so clear cut. For one thing, the Hodder version of Intrigue is much scarcer than the Knopf one, of which there are, presently, getting on for forty copies of the 1943 or (more commonly) 1960 edition on AbeBooks, as opposed to just two copies of the Hodder Intrigue. (My copy, incidentally, came from the basement of Camilla's secondhand bookshop in Eastbourne, bought for a fiver.) More importantly, however, there's the introduction. In the Knopf edition(s) it's by Alfred Hitchcock, whereas in the Hodder edition it's by Ambler himself. I haven't read Hitchcock's introduction in the Knopf Intrigue, but having read his typically glib one for his own Sinister Spies anthology, I can't imagine it's terribly insightful. Ambler's, on the other hand, though only four pages long, is revealing about the origins of each novel, agreeably anecdotal, and winningly self-deprecating about the business of writing introductions. 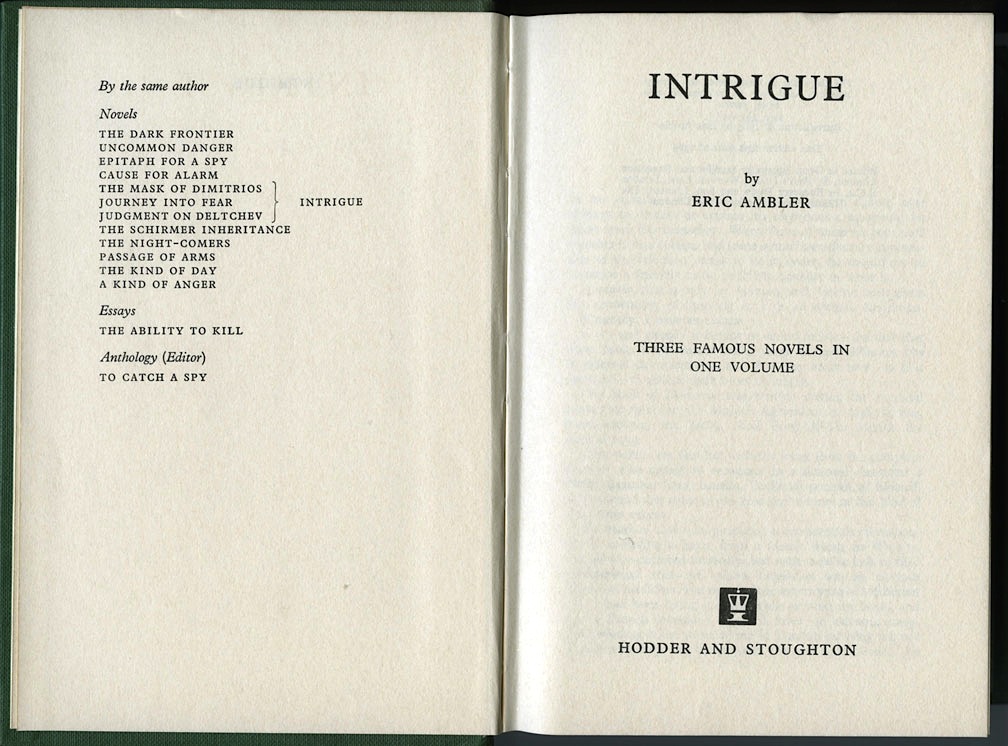 Having stated that "no writer of popular fiction should ever attempt to discuss or explain his own books; he should let them speak for themselves", Ambler then presents his excuse for ignoring his own advice: "It is – and already it begins to sound feeble – the fact that these books were written under three entirely different sets of circumstances, and that they seem now – as if it mattered – to reflect their times of origin." Of The Mask of Dimitrios he notes that it "was written during the nominal peace that followed the Munich agreement of 1938" and "was, inauspiciously, the Daily Mail Book-Of-The-Month for August 1939". He recalls how he "thought of the whole shape and plan... in a third-class compartment of the night train from Paris to Marseille" – the seat being "too hard for sleep" – and "made notes on a scrap of paper. They consisted of a rough sketch of Europe with a squiggly line drawn across it, and the words, 'begin Turkey – end Paris – Demetrius? Dimitrios'."

After musing that "[m]ost writers are familiar with the letter from the complete stranger who claims to recognise in a fictional character a thinly disguised (and, usually, libellous) portrait of himself", Ambler reveals that "The Mask of Dimitrios produced a considerable correspondence". There was the "Greek living in Wichita, Kansas who declared furiously, and with notable lack of filial consideration, that the odious Dimitrios was an obvious portrait of his father"; the French journalist who was convinced Dimitrios was based on a living Greek criminal (of whom Ambler had never heard); and the man in Argentina who sent "ten closely-written pages... in an awkward mixture of bad English and German" claiming that he had found in the novel "clear evidence of the manner of his father's death in the early thirties".

"Unfortunately," Ambler adds, "he neglected to mention which of the book's characters he had identified as his father." 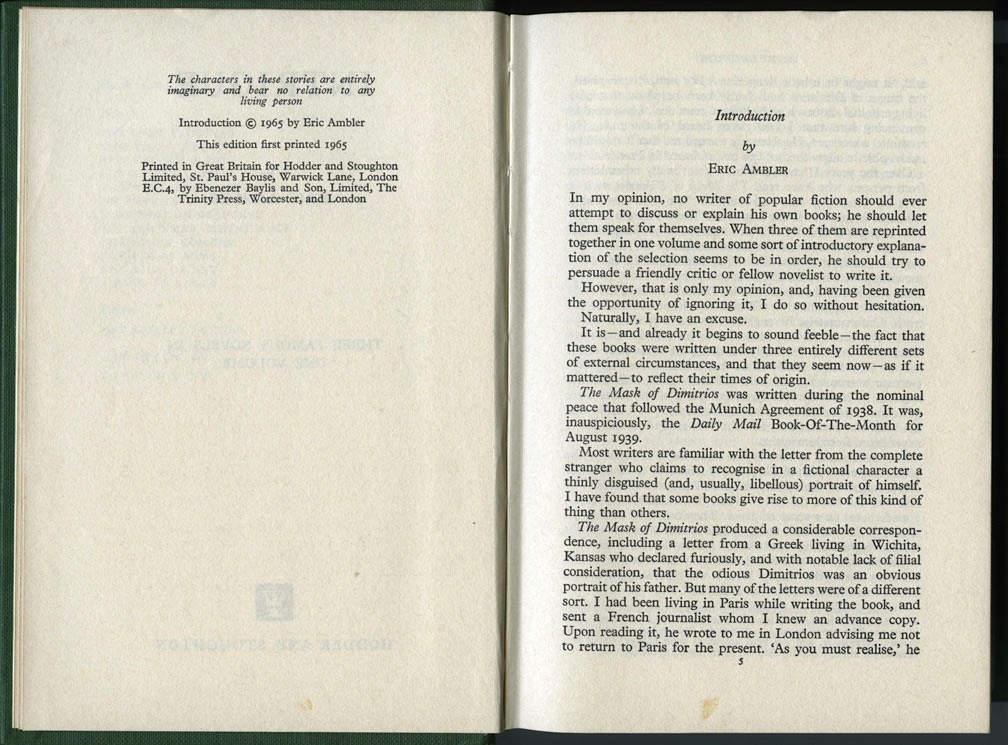 Like The Mask of Dimitrios, Journey into Fear "was also evolved in a train" – this time "[s]tanding in the packed corridor of an express which stopped at every station between Lyon and Paris", although Ambler "made no notes on that occasion. As everyone seemed certain at that point that we were all going to be bombed or gassed at any moment, note-making scarcely seemed worthwhile." The book "was written while I was waiting to go into the army during the 'phony' War. It was the Evening Standard book choice for the month of Dunkirk." In a footnote Ambler muses: "An earlier book of mine, Cause for Alarm, had been published in the week of Hitler's invasion of Austria. The recurrent international crises of the pre-War period seemed to follow the Spring-Autumn publishing pattern relentlessly, and the book casualties were always heavy. Few persons are in the mood for thrillers when the sky is falling." He further expresses surprise that "I, who had an original (1917) drawing of Will Dyson's [Merchant of Death] monster hanging on the wall by my desk, should so readily have decided that the object of the reader's sympathy and concern in Journey into Fear could be an arms salesman."

Judgment on Deltchev was written ten years after Journey into Fear, "after six years in the army and an embroilment with the film industry". For Ambler, "novel-writing had been a laboriously-acquired habit. In the army I lost the habit, and the process of recovery was slow." That process took place at a house in St. Margaret's Bay in Kent, leased from Noel Coward on the condition "that I should use the house in which to write another book". "Forget all this film nonsense," Coward told Ambler: "You think you will always be able to go back to the well. That may be so, but remember this; if you stay away too long, one day you will go back and find the well dry!" The house's previous tenant had been Ian Fleming, "then about to embark upon his series of James Bond adventures. Obviously the house and its landlord were together conducive to work in the genre."

Ambler rewrote Judgment on Deltchev "at least five times" and "started and discarded three other books during those years": not only did he have to reacquire "the writing habit" but "the internal world which had confidently produced the earlier books had been so extensively modified that it had to be re-explored".

If this sounds unduly solemn from a thriller-writer with the sole and avowed object of providing entertainment, then perhaps I may quote Ian Fleming on the subject: 'While thrillers may not be Literature, it is possible to write what I can best describe as "thrillers designed to be read as literature".' Such an aim would surely excuse a measure of solemnity and some critical self-examination.

"On reflection, however," Ambler offers in closing, "I think that perhaps I was right in the first place. It really is better to let the books speak for themselves." 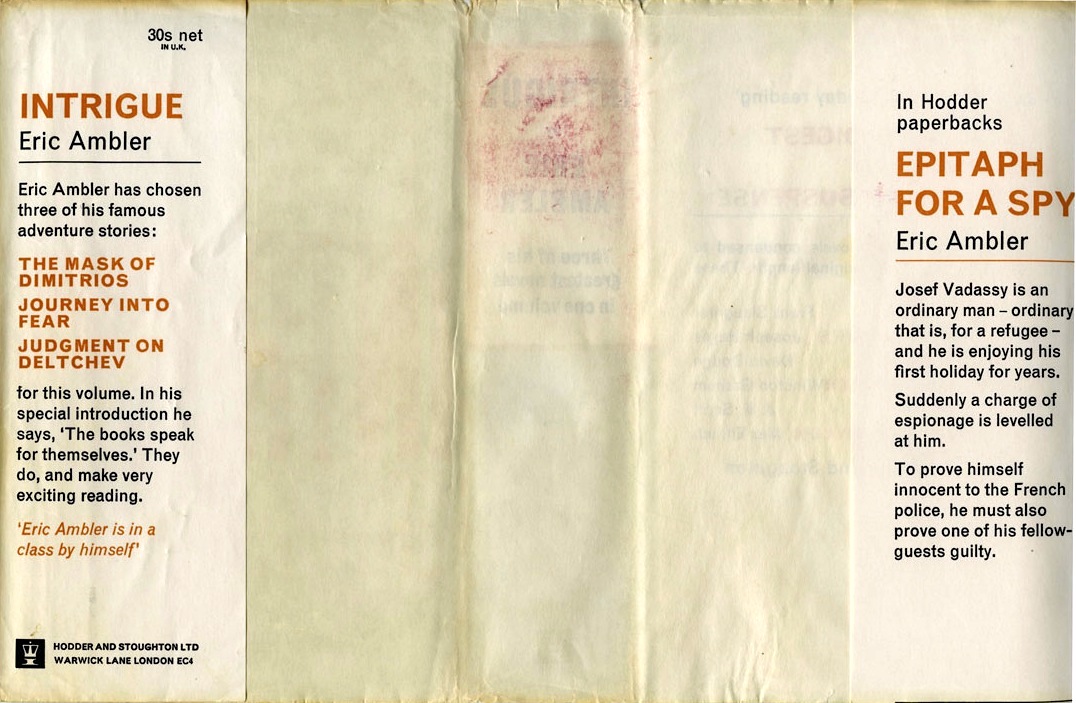 Before I move on from Eric Ambler – whose work, by the way, Ethan Iverson will also shortly be exploring over at Do the Math – I thought I might showcase a couple of Ambler first editions, both of which I acquired on London's Cecil Court.
Posted by Nick Jones (Louis XIV, the Sun King) at 09:00