The Existential Ennui Review of the Year in Books, Blogging, Babies, Records and Comics, 2013

What's this? Only the 6th of December and already I'm beginning my traditional, tedium-inducing, widely reviled, multi-post look back at the year that was? After all, for the past couple of years I've tended not to begin the Existential Review of the Year in Books and Comics (as was) until deep into December, posting the third and final missive either on or just prior to the 31st. So what in the name of blistering fuck is going on this year?

Two things. The first is that my intention this time is to down tools and step away from the blog for the festive period, knocking off well before Christmas Day and not posting anything until the new year. Quite frankly, my dears, what with one thing and another, I'm bloody knackered, and though blogging isn't, I don't think, the root cause of that (I'm looking at you, work...), it couldn't hurt to take a short break from it anyway. (Some unkind souls might suggest a more permanent one is in order.)

The second is, and related to that intention, having scaled back the number of posts in the Existential Ennui Review of the Year from a preposterous six in 2010 – the year I instituted the Review – to a marginally more sensible three apiece in 2011 and 2012 – an introductory survey of the year, a big long list of all the books I read that year, and my pick of the ten best books from that list – this year I'm planning a patience-testing five posts in total: this introductory one wot you is reading right now; the aforementioned big long list of books; its attendant ten best; and two others to be revealed further down this post. And given that these days, with the various demands on my time, I'm not able to post as frequently as I'd perhaps wish (although still more frequently than others might prefer), I figured I'd better get cracking if I've a hope of finishing before Christmas.

So, let's kick off this year's introductory survey with by far the biggest event of 2013 chez Louis XIV, the Sun King: 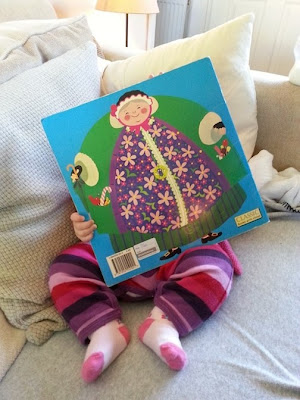 An outsize picture book. No, wait: 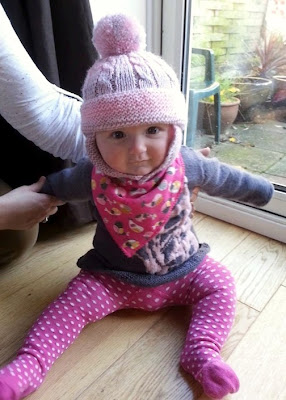 Edie! Yes, 19 May 2013 saw the birth of a tiny, mewling, blue, gore-covered creature which on closer inspection stood revealed as a little baby girl, and which on later reflection I realised was, er, mine* (and Rachel's, obvs). (*Unless there's been a mix-up at the lab, which is always a possibility.) Since then Edie has grown into a much larger, mewling, blue--I mean beautiful, bouncing – literally, when she's in her door bouncer – bundle of fun... except when she's overtired and grouchy, when she's a complete pain in the posterior. But hey! That's babies for you. Not unexpectedly, her arrival, although in and of itself a thing of deep joy, has had an adverse impact on both my reading and my blogging. As you'll see when I unveil the big long list of books I read this year, it's neither as big nor as long as previous years, and as for the blogging, well, I've barely topped 100 posts to this point.

But though those posts have been fewer in number, I like to think they've been higher in quality – or at least kid myself that that's the case; with the odd exception, usually for reference purposes for new posts, I rarely go back and reread them, and I can't be fucking arsed to go and check now, so the reality may be somewhat different. Scanning the 'Previous Posts' list in Existential Ennui's sidebar, of this year's crop I reckon I could probably stand to read the closing Great Tom Ripley Reread essays again – the extended gap in the middle aside, that series turned out quite well, I thought – and maybe some of the Elmore Leonard ones, of which there were quite a lot – see below; and latterly I enjoyed writing about James Mitchell and Ian Mackintosh; and the two new permanent pages I established, British Thriller Book Cover Design of the 1970s and 1980s and the Patricia Highsmith First Edition Book Cover Gallery, aren't too shabby I guess (and neither is the still-expanding Beautiful British Book Jacket Design of the 1950s and 1960s). Otherwise I've little wish to rake over my foul droppings for the year; feel free to scroll down the sidebar yourselves. 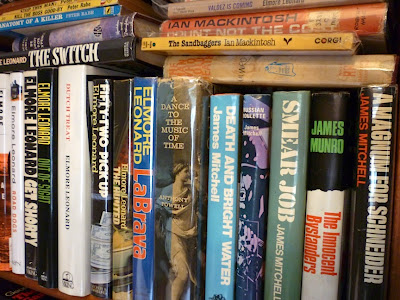 As for books, for some inexplicable reason, around the time Edie was born, I found myself in the grip of an urge to read loads of Elmore Leonard, an impulse which was further spurred when in August the author unexpectedly fell ill and then died. As a result I ended up buying (and blogging about) a lot of Leonard first editions – some of them signed, no less – but by and large – the insane book splurge otherwise known as the Jones-Day late-summer holiday aside – this year I've made a concerted effort to cut back on the number of secondhand books I buy. (Baby milk and nappies are sodding expensive, y'know.) Fear not, however: I've more than enough books in reserve to see me through at least 2014, if not beyond, and I dare say I'll still be acquiring the odd one here and there. 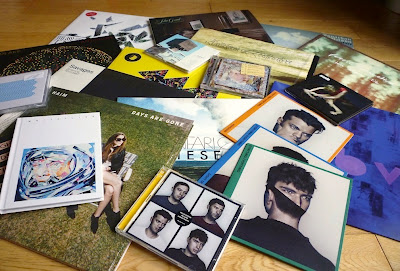 Of course, inveterate hoarder that I am, it's virtually impossible for me not to be collecting something, and more recently that something has been vinyl albums – new ones, I hasten to add, not old ones, of which I already have rather a lot. See, although I've never stopped buying albums, for the past ten years I've been getting them on CD (you'll doubtless be unsurprised to learn that I still prefer a physical format to downloads). (Side note: for a few years in the mid-to-late 2000s, at the peak of the indie artrock scene, I got hooked on 7" singles, and have a decent collection of those... but that's a tale for another time.) This year, however, belatedly, I realised that unlike in what seemed like the dying days of the vinyl album in the 1990s, when they were being shoddily pressed and sounded dreadful, now they're being pressed on heavy 180 gram (so-called 'audiophile') vinyl, and as a consequence sound really good. And not only that, by and large they come with a CD or a download code included.

I can't see myself ever returning to the days when music was my overwhelming obsession – before it became my job for seven or eight years in the '90s and consequently killed that passion stone dead for three or four years after that – but at least the flames of my ardour have been slightly rekindled, and so this year as part for the Existential Ennui Review of the Year I've decided to post my ten best albums. And yes, I know this is supposed to be a books blog, but I have touched on music before – here and here – and anyway it's my blog and I'll do as I damn well please. 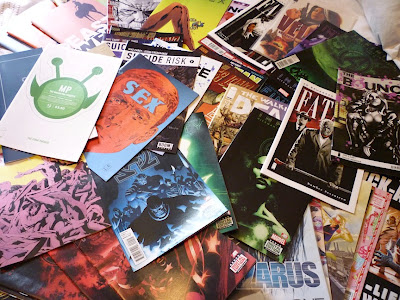 And one other thing which it damn well pleases me to do as part of this Review of the Year is post a ten best comics list. I can't claim to have read every single comic book released in 2013 – certainly I don't think I've read a single graphic novel, or much in the way of small press and indie stuff – and I don't believe I've managed a single post on comics this year either, not even a Notes from the Small Press – but I have continued to buy a fair number of, for want of a better word, 'mainstream' comics, i.e. those published by Marvel, DC – albeit very few from either of those companies – and Image. So I'll be picking my best of those in the next post.
Posted by Nick Jones (Louis XIV, the Sun King) at 05:00