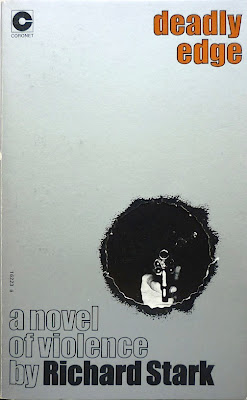 If you missed the announcement on Friday, some (relatively) exciting news: I've established a brand new Existential Ennui permanent page:

A companion page to Beautiful British Book Jacket Design of the 1950s and 1960s – the dark flipside to that gallery, if you will – it gathers together dozens and dozens of covers from '70s and '80s editions of thrillers and crime fiction and spy fiction and the like. Already in the gallery are a bunch of Donald E. Westlake dust jackets – along with contemporaries like Ross Thomas (and his Oliver Bleeck alias), Elmore Leonard, Max Allan Collins and Dan J. Marlowe – and now Westlake's alter ego, Richard Stark, makes his entrance, stalking through the doorway (the door having been kicked down by Parker, naturally) to take his place – in his own right, not under Westlake's name – with seven paperback covers, plus one hardback. 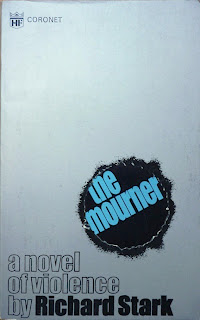 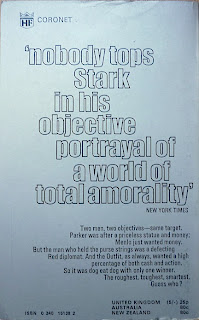 Some of those covers hail from the Parker Mega Score, that haul of Coronet paperback editions of the Parker novels I've been blogging about on and off for over two months – there are a couple more, the 1971 Coronet Printings of The Mourner and The Jugger, randomly illustrating this post – and which after four posts (five if you include this one) I think we've probably all had enough of by now (accordingly, this will be the final post to make mention of it). I've picked four books from the Mega Score to represent Raymond Hawkey's Parker bullet hole double cover design – The Steel Hit (Coronet, 1971, alias The Man with the Getaway Face), Run Lethal (Coronet, 1972, alias The Handle), Deadly Edge (Coronet, 1972, which shows a hand holding a gun on the inner cover, rather than the novel's title) and Slayground (Coronet, 1973, which boasts a gold rather than a silver outer cover) – plus the 1977 Coronet edition of Butcher's Moon, which sports a very '70s photographic cover which may or may not have been by Hawkey's design (I don't know for sure either way). 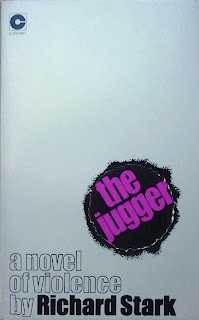 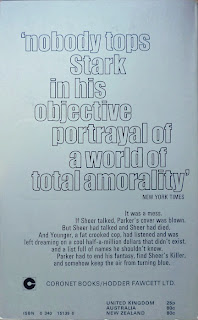 (Incidentally, I already owned copies of two of those Coronet editions before I came into possession of the Parker Mega Score – Deadly Edge and Butcher's Moon – but the Mega Score copies are in slightly better condition than the others, so I'll be divesting myself of my original copies in due course.) 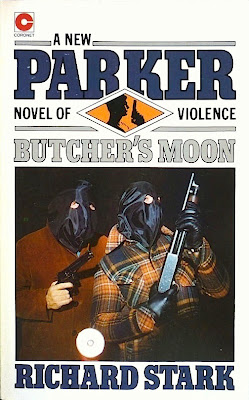 As well as those, I've included the 1970 Coronet second printings of Point Blank! and The Rare Coin Score, both of which sport entirely apposite photographic covers, and my copy of the very scarce 1973 Gold Lion hardback edition of The Sour Lemon Score. By my reckoning that brings the number of book covers on the page up to 100, although it won't dally at that milestone for long: I'll be adding even more thriller covers as the week wears on, and there'll be yet more Westlake and Stark in there before too long. Needless to say, I'll update both The Violent World of Parker and Existential Ennui when that happens. And that link to the gallery again is: 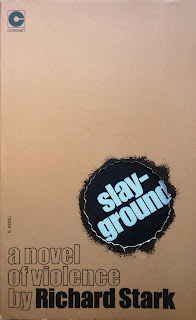 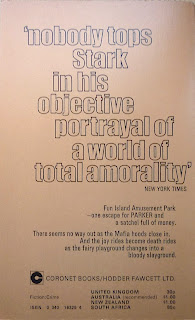