Patricia Highsmith's Those Who Walk Away and The Blunderer (Heinemann, 1967 / 1971 Uniform Edition)

In a further demonstration of what a shoddy piece of workmanship Existential Ennui is, I'm once again delaying an Elmore Leonard blog post because, as with the Lewes Book Fair the other weekend, I completely forgot I was going to a book fair this past weekend – well, actually a comic mart with a pulp and vintage paperback bit tacked on: Comic Empire, which took place at the Royal National Hotel in London's Russell Square on Sunday 20 October, and which I attended because this year's Paperback and Pulp Bookfair had been cancelled. That my decision to attend Comic Empire led in a roundabout fashion to my winding up in the doghouse at home (don't ask) is on first inspection deeply ironic, in that it turned out the event was, as its title suggests, very much weighted towards comics – there were, at a guess, getting on for fifty comics dealers in attendance – and very much less so towards pulps and paperbacks: there were, I think, just two paperback dealers there; but in the end my doghouse status was at least partly assuaged when having given up on Comic Empire (while I still buy new comics, nowadays I don't have many back issues on my wants list) I chose to pop round the corner to Skoob Books, whereupon and wherein I scored a pair of Patricia Highsmith novels. All of which is a very long-winded way of saying that I have two new additions to my recently established Patricia Highsmith First Edition Book Cover Gallery – or rather, a new addition and a swapsy, because this book: 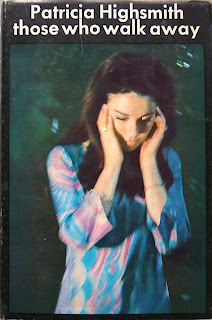 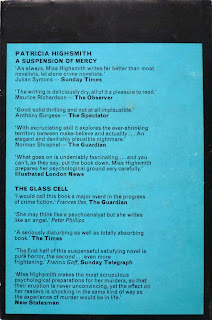 the 1967 Heinemann first edition of Those Who Walk Away, or rather, another copy of it, was already in the gallery. The dust jacket of that other copy wasn't in the greatest of shapes, however, and I've been toying with finding a replacement almost since the day I bought the book back in 2010. So I was delighted when I spied this copy, lying flat – secreted, almost – atop some paperbacks in Skoob's crime fiction section. The case and block are in near fine condition and, more importantly in this context, the Bruce Pinkard-designed dust jacket is at least, I'd say, very good. A snip at nine quid, then.

I paid a little less for the other Highsmith book I bought in Skoob, although it's debatable whether that was still too much; depends on your point of view, I guess. It's certainly very scarce, but it's also a reprint – a reprint of a reprint, in fact – and furthermore this particular copy is missing its front endpaper, which suggests it's probably ex-library. On balance, however, and ultimately – I must admit I did um and ah a bit, popping outside the shop to check on my phone for other copies online (Skoob is in a basement, so there's no signal inside) before eventually laying down the cash – its scarcity, in conjunction with another intriguing aspect, made it irresistible to me. So what is it? 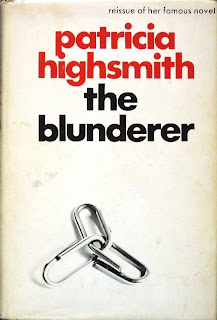 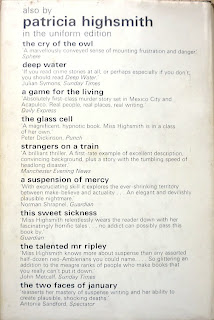 The 1971 Heinemann reprint of the 1966 Heinemann edition of the 1956 Cresset Press edition of The Blunderer, Patricia Highsmith's second novel (or third if you count the pseudonymous The Price of Salt). Published in Heinemann's "uniform edition", I've showcased a similar book previously: 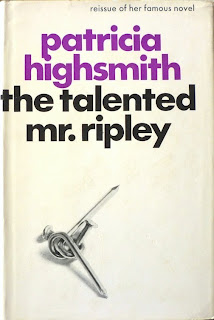 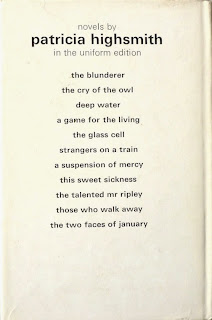 The 1973 Heinemann reprint of the 1966 Heinemann edition of the 1957 Cresset Press edition of The Talented Mr. Ripley, Patricia Highsmith's third novel (or fourth etc., etc.). Heinemann republished a number of Highsmith's novels in uniform editions in the early 1970s, not just those originally published by Cresset Press (they also reissued Highsmith's debut, Strangers on a Train) but those originally issued by Heinemann themselves in the late 1950s (Deep Water, A Game for the Living) and throughout the 1960s (This Sweet Sickness, The Cry of the Owl, etc.). All sport similar (uncredited) dust jacket designs – lower case author name (in colour) and title with an image of a metal puzzle, all on a white background – and all are, to varying degrees, hard to come by these days.

Even harder to come by, however, are the 1966 Heinemann printings of Strangers, Blunderer and Talented. I've never seen copies of any of them, so I've no idea whether they sport the same dust jacket design as the early '70s uniform reprints or something else entirely; if anyone reading this has any of those '66 edition, I'd love to take a look at them. But what I do know is that at least in the case of The Blunderer, there were a number of errors in the '66 edition, as evidenced by the reprint line on the copyright page of the '71 reissue: 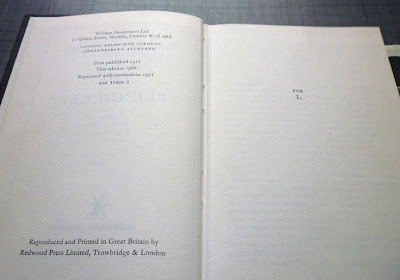 Wonder what those "corrections" were...? Anyway, I've added The Blunderer to the Patricia Highsmith First Edition Book Cover Gallery – under "Patriciaphernalia" down the bottom – and swapped the old copy of Those Who Walk Away for the new one, so I invite you once more to take a stroll along the gallery and gaze upon the Highsmith editions therein.