NB: A version of this post also appears on The Violent World of Parker; a Friday Forgotten Book.

I unveiled the bulk of the Westlake – or rather, Richard Stark – Scores I acquired from Alan White Fine Books in one great big splurge of a bloated blogpost on Wednesday, but I kept one back because it dates from slightly earlier in the Parker series. 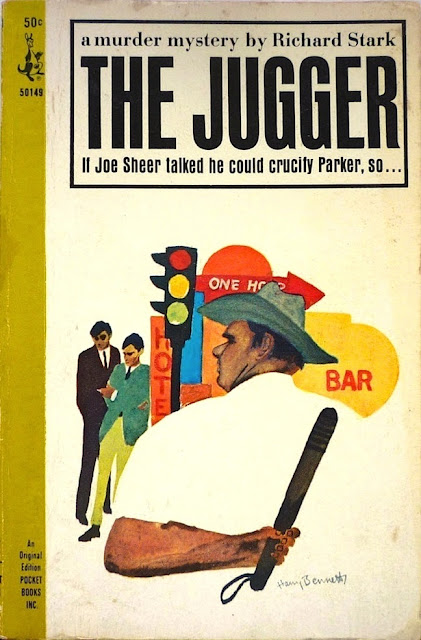 Published in the States by Pocket Books in 1965, The Jugger is the sixth novel in Donald E. "Richard Stark" Westlake's series starring taciturn career criminal Parker. The cover art is by Harry Bennett, who illustrated the covers of all eight of the Pocket Parkers, from The Hunter (1962) to The Handle (1966), and though there's a general sense among Parker fanatics that there's something a bit off about the novel itself – fuelled, in part, by Westlake himself; more on that in a moment – I'm of the firm belief that the cover is one of Bennett's best efforts on the Parkers. I like the abstraction of the midground – that jumble of flat colours denoting signage – and the way Bennett's placed the figures and the rest on a white background, using the negative space for Captain Younger's shirt. Clever, confident stuff. And as is often the case with Bennett's Parker covers, you get a bonus sketch on the back too: 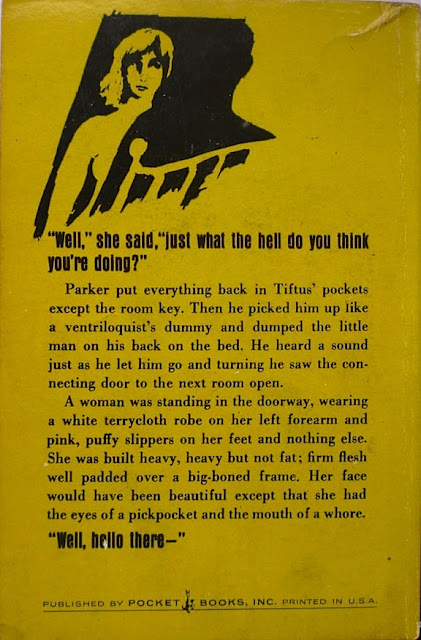 In an Austin Chronicle interview excerpt on the Violent World of Parker dedicated page for The Jugger, Westlake identifies the book as "one of the worst failures I've ever had", pointing to the way he "spoiled" the novel "by having [Parker] do something he wouldn't do", i.e. going to the aid of his "mailbox", Joe Sheer. Except as Trent notes in the subsequent review, he doesn't; as the novel itself makes clear: "...he had come up to this rotten little town to find out if it was going to be necessary to kill Joe Sheer or not". Westlake's misremembered disapproval of The Jugger might be part of the reason some Parker enthusiasts aren't keen on the book, but perhaps a bigger part is the unusual nature of the thing, at least in comparison to the bulk of the Parkers. As Ed Gorman points out, it's not a heist thriller but "a kind of psychodrama". Viewed in that light, and on its own merits rather than as a decent book in an exceptional series, it stands revealed as a cold, mean mini-masterpiece. 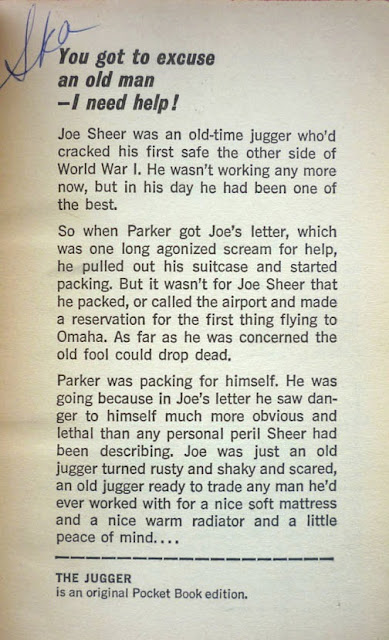 Mind you, despite my sweeping generalizations about Parker fans' feelings about The Jugger, you don't actually have to look that hard to find folks who appreciate it for what it is; witness the glowing reviews at Pulp Serenade, Kevin's Corner, and especially this thoughtful, perceptive one at Olman's Fifty. In fact, on reflection, it's looking increasingly like Westlake was the only person who didn't rate the book...
Posted by Nick Jones (Louis XIV, the Sun King) at 04:00