For this final post on Kingsley Amis – for which, if the marked decline in blog traffic over the past week or so is any indication, the dwindling readership of Existential Ennui will be thankful – here's a first edition of Amis's fifth novel, which I found hidden in the little bookcase fixed to the wall outside Peter Ellis's bookshop on Cecil Court, and bought for three quid: 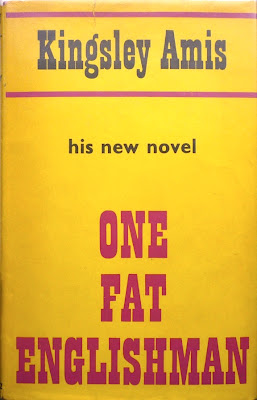 One Fat Englishman, published by Victor Gollancz in 1963. Now, once or twice during this run of posts I've suggested that there is more warmth, more, as Kingsley's son, Martin Amis, put it, "reckless generosity" in Amis père's novels than those who are only familiar with his reputation – i.e his endlessly regurgitated, perennially picked-over failings – rather than with his work – would suppose. But that's by no means true of all his novels, and it's certainly not the case with this one. Roger Micheldene, the titular Fat Englishman, a libidinous book publisher abroad in America, is a strikingly loathsome creation, and the assortment of writers, students, intellectuals and linguists he encounters at various parties and functions in and around the campus of the fictional Budweiser college (standing in for Princeton, where Amis was a lecturer in the late-1950s) – and their wives and girlfriends, most of whom he attempts (sometimes successfully) to bed – is little better. 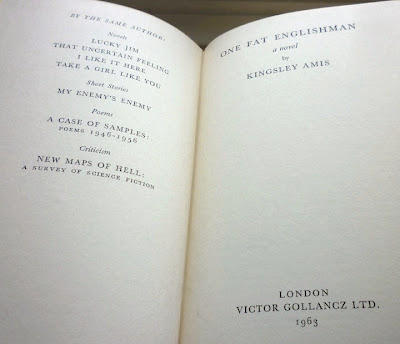 In a 2002 article for The Guardian, David Lodge recalled that on original exposure to One Fat Englishman in 1963 he "hadn't really enjoyed reading it, and enjoyment was very much at the heart of my interest in Amis's earlier fiction", but that when he reread it years later it was "more comprehensible and interesting", not to mention "much funnier". Personally I prefer the mid-sixties–mid-seventies Amis novels, but my reaction to One Fat Englishman was similar to Lodge's, except condensed: I was initially repelled by the book, but found myself thinking about it a fair bit once I'd finished.

Lodge identifies Micheldene as "a devastating and prophetic self-portrait", but Amis actually had something different in mind when he wrote the novel. As Michael Barber explained in a 2006 Hudson Review piece – republished on Existential Ennui in 2011 – on Zachary Leader's Amis biography: "Intended as an egregious exponent of the strident British anti-Americanism that Amis then deplored, Micheldene was mistaken by many readers for the author’s mouthpiece." Here Barber was drawing on the evidence of his own eyes and ears: in 1975 he interviewed Amis for The Paris Review, and raised the subject of Micheldene and One Fat Englishman, to which Amis responded:

"...I think the pro- and anti-American stuff hasn’t, if I may say so, been properly understood. What I was doing was knocking British anti-Americanism, and I thought, Put all the usual tired old arguments into the mouth of a very unsympathetic character. I thought this was quite a good way of showing up all those British attitudes. But I must have muffed it somewhere along the line because American reviewers fell into two classes: one lot said, 'Mr. Amis makes some shrewd hits on the deficiencies in our culture.' And they were meant to be very unshrewd hits. Others said, half rightly, 'Mr. Amis's objections to American life are very old hat. If they were ever accurate, they no longer are so. It's all been done better by American writers.' Well, that's true, except that they got the name wrong. Roger Micheldene's objections were all of those things."

Of course, a novelist's relationship with his or her own characters is always complex, and Amis went on to concede that "life tells us all the time that it's possible to like the people that you violently disapprove of" and that he'd "quite enjoy a couple of drinks with Roger". That much is evident in the novel itself, where Amis details Micheldene's exploits with a savage glee; and it is, admittedly, hard not to detect the author's guiding hand in places, such as when Micheldene sneeringly but wittily (and even today, appositely) predicts the likely notices for the debut novel by Irving Macher, a young Jewish author he's taken a dislike to (and who will become his nemesis):

'A profoundly disturbing and yet deeply compassionate vision of the human situation'—Philip Toynbee. 'Perhaps one of the four most poised and authoritative contributions of the New York neo-Gothic meta-fantasy school'—Times Literary Supplement. 'This searing, sizzling, lacerating I.C.B.M. of a book will pick you up, throw you down and trample on you'—Daily Express. 'Remarkable'—Yorkshire Post.

Even Roger can't ignore the obvious literary qualities of Macher's novel, however, and so it is, after a fashion, with One Fat Englishman: a pleasant – or pleasurable – experience it may not be, but it's not one soon forgotten. 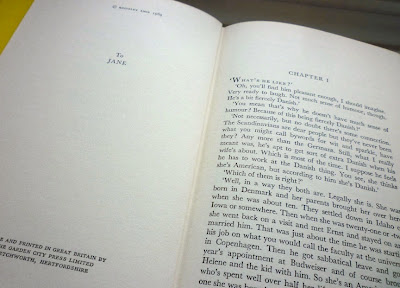