On to the second of two posts on Adam Hall – the Quiller spy thriller-writing alias of Elleston Trevor – memorabilia. And having showcased some of the items that Trevor's son, JP, has for sale, I thought I'd showcase my own Adam Hall item – which, before you ask, is most definitely not for sale, and which is related to this: 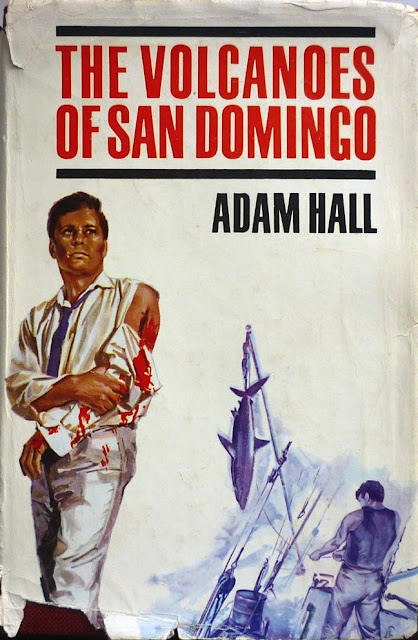 The British first edition of The Volcanoes of San Domingo, published by Collins in 1963. This is the first book Trevor wrote under the Hall nom de plume, before deploying the moniker, from 1965 to 1996, to pen the nineteen books which comprise the series starring secret agent Quiller. The Volcanoes of San Domingo has nothing to do with Quiller, however, at least in terms of plot: it's a standalone thriller set in the fictional South American country of Aguador, where Transocean Airlines head of London station Paul Rayner is sent to investigate the circumstances of a TOA airliner crash off the coast of the capital of Aguador, San Domingo, and how the captain of the plane has been spotted in the country when all on board were reportedly killed. Stylistically, though, despite being written in the third person rather than the Quiller novels' first, it's clearly cut from the same cloth. Though the locale is fictional, Hall's evocative description brings the place to sweltering, sticky life, and certain phrases and action sequences presage Quiller: a couple of appearances of Quiller catchphrase "no go", for example, or a tense knife fight narratively deconstructed – slowed down and broken down into its bruising, bloody constituent parts. 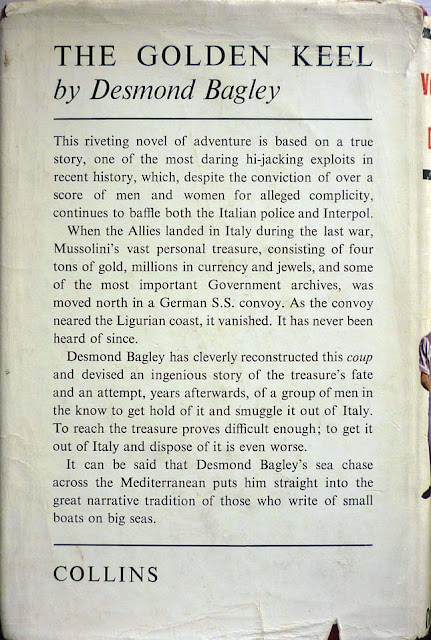 The jacket design of the Collins edition is credited to Bryan Lubrani, who also painted covers – usually credited as Brian rather than Bryan – for books by Charles Kearey, Mary Scott and Chester Alan. He's virtually forgotten these days, but even so, he was the main reason (the other one being I've enjoyed the Quillers I've read and was intrigued to find out what the first Adam Hall novel was like) I decided to hunt down a copy of The Volcanoes of San Domingo. Or rather, trying to learn his name was the main reason – because I'd come into possession of this: 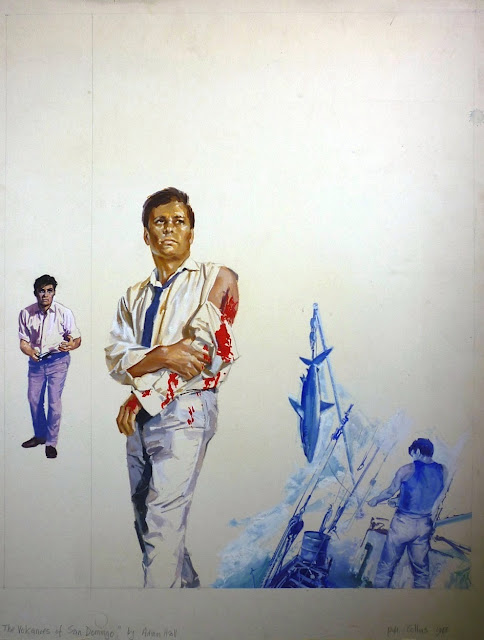 The original artwork for the jacket, which I acquired from David Schutte. Painted in acrylic – or possibly poster paint – on board at a surprising four or five times the size of the printed version, it lacks the front cover and spine text, which was obviously added by a designer at Collins. But it also lacks a signature or any other kind of credit; the pencil writing at the bottom lists the book's title, author, publisher and year, but not the artist; while the label on the back: 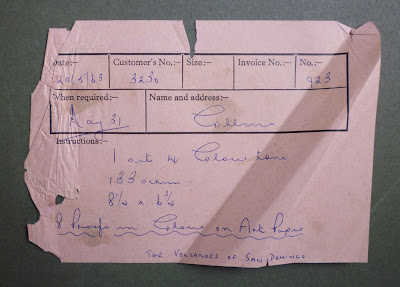 lists almost everything under the sun other than the identity of the illustrator. David Schutte didn't know who the artist was, and I couldn't find the information online either. The only thing for it, then, was to try and locate a copy of the Collins edition and hope that it carried a cover credit on the jacket flap. Unfortunately, finding a cheapish, decent-ish copy – not ex-library, in other words – with a dust jacket in the UK wasn't as straightforward as I'd hoped, and I actually ended up asking JP Trevor if he had a copy he could check for me (he didn't). But in the end I found one, and Bryan Lubrani was credited on the front flap. Phew. Mystery solved. 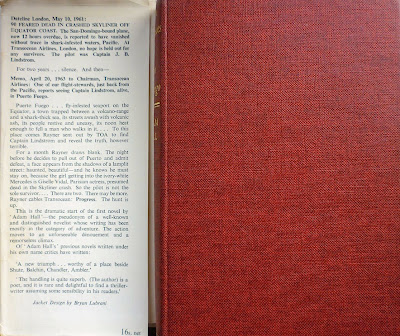 Even though Mr. Lubrani isn't exactly the most well-remembered of cover artists, I still like this piece a lot; it's now framed and hanging on a wall at home. Is it the greatest cover ever created? Not by a long chalk; the likes of Val Biro and Denis McLoughlin were creating more striking dust jacket art around this same period (see the Beautiful British Book Jacket Design of the 1950s and 1960s permanent page for examples by those and other artists). But it is nicely painted, and it's significant, in that it illustrates the first book Elleston Trevor wrote as Hall. Moreover, it's representative of the way covers were created back then – partly the materials used and the time taken, but also, and more vitally, the way that, much as Biro and McLoughlin did with the novels they designed wrappers for, Bryan Lubrani evidently read The Volcanoes of San Domingo. That's plainly Paul Rayner on the front of the jacket, nursing the injury he receives whilst shark fishing early in the story – a scene depicted in blue in the bottom right corner – while the blade-wielding boy on the spine is Paul's "Levantine" opponent in the knife fight two-thirds of the way into the novel. 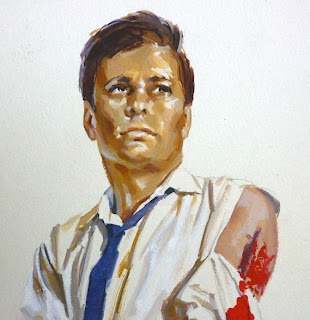 These days, cover designers rarely get to read the novels they create the covers for; indeed they're lucky if they even get a brief synopsis, which is part of the reason why we see so many formulaic Photoshopped image library covers – other reasons being it's cheaper to design covers that way, and marketing departments seem unable to disabuse themselves of the restricting notion that certain covers should look a certain way – i.e. a man running into the distance on an urban street for thrillers, or foggy, "found", arty photographs on literary works. That such an, in its day, essentially un-extraordinary cover as Lubrani's should seem so extraordinary by comparison is, for me, very telling. It reminds us – reminds me, anyway – of what we've lost, I think. Not necessarily hand-painted and -lettered covers and jackets – although more of those would be welcome (and the odd individual, such as Lewes-based designer Neil Gower, is doing their best to keep that tradition alive) – or covers that explicitly illustrate particular scenes from a novel; but covers conceived and created by talented artists and designers, not sales and marketing departments; covers where those artists and designers have been granted the opportunity to read the book before making its cover.

I suppose some designers may baulk at that arduous task. To them I say: if an author has given over a year (or more) towards writing a book, the least you can do is spend a few days reading the damn thing. Ultimately, lovingly designed covers will be to the benefit of those of us who'd like to see the physical book not only survive, but flourish. (And how much more desirable is that in the wake of the woman whose Kindle was wiped – and yes, eventually restored, but that's beside the point – by Amazon?) If that is to happen, there has to be a reason for it to happen, and it strikes me that beautiful design – along with great production and printing and binding – is as good a reason as any.

So then. Campaign for Proper Cover Design, anyone?
Posted by Nick Jones (Louis XIV, the Sun King) at 06:11