One would have thought, having reached a new milestone of 60 covers in the Beautiful British Book Jacket Design of the 1950s and 1960s gallery, that I might perhaps rest on my laurels, or at the very least pause for a moment's reflection. But oh no. I'm plunging merrily onwards, and have now added another four dust jackets to the page, beginning with a jacket designed by a man who already has one wrapper in the gallery: 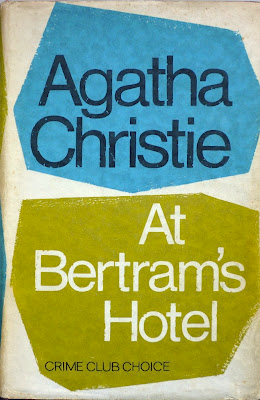 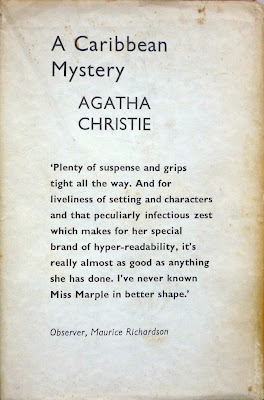 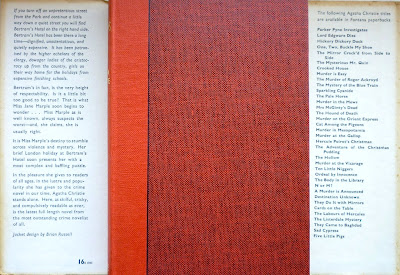 Published by Collins in the UK in 1965, this is the British first edition of Agatha Christie's At Bertram's Hotel. As with the Agatha Christies I showcased yesterday, this copy isn't actually mine – it's from Rachel's splendid collection of Christies – but I wanted to include it in the Beautiful British Book Jackets gallery because its wrapper was designed by Brian Russell, who also designed the jacket for the 1962 Frederick Muller first edition of Desmond Cory's Undertow, which joined the gallery last week. And if you compare the two, there are definite similarities: the ever-so-slightly askew typography and rough edges on the black sea on the Undertow front cover are echoed by similar treatments on At Bertram's Hotel. 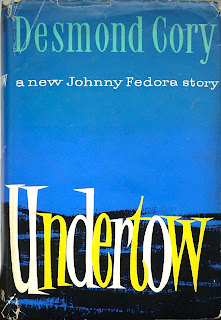 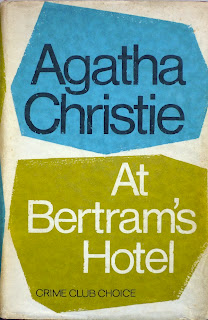 And speaking of Desmond Cory, a further two Cory jackets – for Johnny Fedora spy novels – have also joined the gallery, rephotographed from their original appearances on Existential Ennui: Klim Forster's cover for the 1966 Frederick Muller edition of Feramontov, and Abis Sida Stridley's one for the 1967 Muller edition of Timelock. Those two probably have more in common with the, shall we say, less subtle, less nuanced school of jacket design which would come to prevail in the 1970s, but there is, I feel, enough of the playfulness of the 1960s about them to warrant their inclusion, and with Timelock there's an additional link to At Bertram's Hotel: Sida Stridley's photographs illustrated the 1965 Woman's Own serialisation of the novel. 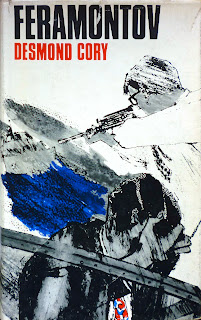 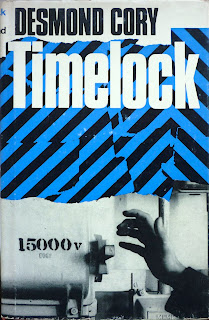 Finally, having set a precedent with the inclusion of Cecil Walter Bacon's lovely jacket for the 1970 Geoffrey Bles edition of P. M. Hubbard's Cold Waters, I've decided to add another wrapper which falls just outside the established remit of the gallery: that of the 1949 British Collins edition of Roald Dahl's Sometime Never – again rephotographed from its original appearance – designed by Stephen Russ, if only to illustrate that there were, of course, lovely dust jackets being designed before the 1950s, as there were after the 1960s. But I still stand by my assertion that the '50s and '60s were a golden age for wrapper design, and I'd suggest that you'd find more beautiful book jackets from those two decades than you would from the years either side – as I'm hopefully demonstrating. 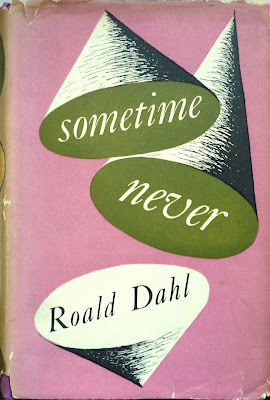 And there are still more dust jackets to come, as I'll shortly be adding three jackets from children's books from the early 1960s – although the authors in question will already be familiar to regular readers of Existential Ennui...
Posted by Nick Jones (Louis XIV, the Sun King) at 06:31