The Spy Thrillers of Desmond Cory: Johnny Fedora and the Feramontov Quintet

If you're wondering whether we'll ever reach the end of my protracted series of posts on spy fiction series – well, quite frankly, you're reading the wrong bloody blog (see masthead). But even the most committed of espionage enthusiasts can tire of "the Great Game" on occasion, and since the spy series posts have been running on and off for two months now, and I'm keen to mix it up a bit more going forward, you can take some solace in the fact that there will be some non-spy stuff (and indeed non-Westlake stuff for that matter) on Existential Ennui very soon indeed. But not just yet. There are still a couple of terrific spy fiction authors I'm eager to cover before moving on to other matters, not least among them being British writer Desmond Cory. 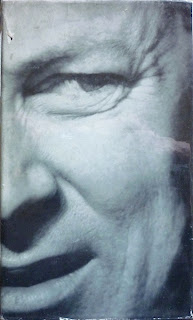 Desmond Cory – a pen name of Shaun McCarthy (1928–2001) – had dozens of crime and spy thrillers published over a forty-plus year period from 1951 to 1993. Sixteen of them feature British secret agent Johnny Fedora, and it's those novels I'll be concentrating on in this run of posts, specifically the five books which close out the series. Johnny Fedora made his debut in one of two Cory novels published in 1951, Secret Ministry (the other being a crime novel, Begin, Murderer!) – reissued in the States as The Nazi Assassins – beating another, more famous operative, Ian Fleming's James Bond, into print by two years (Casino Royale didn't arrive until 1953). Half Spanish, half Irish, a former Spanish Civil War combatant, Chicago gangster and F.B.I. counter-espionage agent – not to mention a talented piano player – Fedora is essentially freelance, hired by British Intelligence on a case-by-case basis – often assisted by Sebastian Trout of the Foreign Office – and pitted against Nazi spies, trained killers and Soviet agent provocateurs, against whom he proves highly lethal. 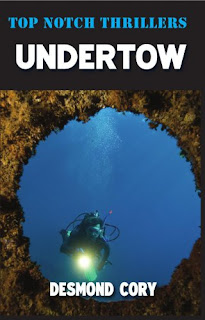 As is the way with a lot of the authors I blog about, Desmond Cory is largely overlooked these days, but the odd review aside, there is one excellent resource for him on the web. The Desmond Cory Website is a treasure trove of information about the author and his best-known creation, with bibliographies, book cover galleries and downloadable articles on and interviews with Cory. Even so, the majority of Cory's books have slipped out of print, some of them becoming incredibly scarce in any edition, so that reading Cory's Fedora novels – let alone collecting them – has become a tricky proposition, and nigh on impossible in some cases. The major exceptions are the first three Fedora outings, which are available as eBooks for the Kindle through Amazon, and 1962's Undertow – the first novel in what's known as the Feramontov Quintet – which Mike Ripley's Top Notch Thrillers imprint – home, too, to the Jonas Wilde books I've just finished blogging about – reissued towards the end of last year.

And it's to Undertow that I'll be turning next, as Johnny Fedora encounters for the first time the twisted, feline Russian spy who would bedevil him for the remainder of his literary career: Feramontov...
Posted by Nick Jones (Louis XIV, the Sun King) at 08:34