Welcome back. And with Christmas done and dusted – I do hope yours was bearable – it's back to the year-end round-up here on Existential Ennui. When last we met, I'd posted an introspective overview of Existential Ennui's highlights in 2011 – the word "highlights" there being an entirely subjective and debatable piece of nomenclature. But of course, all that books blogging couldn't really have taken place without my having read a book or two over the course of the year, and so, much as I did last year, today I'm presenting a Bloody Great List of all the books I read in 2011, in roughly the order I read them. Except this year there's a twist: in each instance I've also linked to whatever piffle I posted about that particular book – unless it's a book I haven't yet blogged about, in which case, I, er, haven't. Exciting stuff, and no mistake. Let's take a look, shall we?

Pronto by Elmore Leonard
Killing Floor by Lee Child
The Brass Go-Between by Oliver Bleeck (Ross Thomas)
Riding the Rap by Elmore Leonard
When the Women Come Out to Dance by Elmore Leonard
Sleepyhead by Mark Billingham
Scaredy Cat by Mark Billingham
Free Agent by Jeremy Duns
The Quiet American by Graham Greene
The Only Girl in the Game by John D. MacDonald
One Good Turn by Kate Atkinson
The Wanderers by Richard Price
The Fools in Town are On Our Side by Ross Thomas
Anarchaos by Curt Clark (Donald E. Westlake)
The Labyrinth Makers by Anthony Price
A Hive of Glass by P. M. Hubbard
The Alamut Ambush by Anthony Price
Colonel Butler's Wolf by Anthony Price
When Will There be Good News? by Kate Atkinson
Started Early, Took My Dog by Kate Atkinson
Isle of 100,000 Graves by Jason / Fabien Vehlmann
The Terminal Man by Michael Crichton
The Berlin Memorandum by Adam Hall
October Men by Anthony Price
Lemons Never Lie by Richard Stark
Dexter is Delicious by Jeff Lindsay
Dead Skip by Joe Gores
Smiley's People by John le Carré
Blame the Dead by Gavin Lyall
Ratking by Michael Dibdin
The Eighth Dwarf by Ross Thomas
SS-GB by Len Deighton
Death of a Citizen by Donald Hamilton
The Eliminator by Andrew York
The Cataclysm by R. C. Sherriff
Day of Misjudgment by Bernard Maclaren
On the Beach by Nevil Shute
Alas, Babylon by Pat Frank
Only Lovers Left Alive by Dave Wallis
The Road by Cormac McCarthy
Butcher's Moon by Richard Stark
The Cold Dark Night by Sarah Gainham
Operation Overkill by Dan J. Marlowe
Slow Burner by William Haggard
The Ipcress File by Len Deighton
Undertow by Desmond Cory
The Mercenaries by Donald E. Westlake
The Cut by George Pelecanos

The first thing to note, I suppose, is the overall total: forty-eight books, which is significantly down on 2010's grand total of sixty-nine. I'm not entirely certain why that's turned out to be the case; I suspect it's due to the additional time and effort I've been putting into Existential Ennui (not so's you'd notice, mind), but it could equally be sheer bone idleness on my part. Whatever the reason, I guess I could have cheated and included the two books I'm currently still reading to bring the total up to the totemic fifty... but that would have meant my starting 2012 behind. So forty-eight it is. 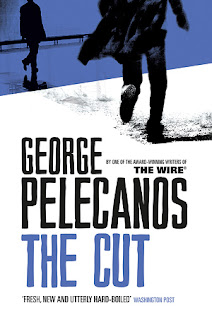 The second thing to note is that I read even fewer "new" books this year than I did last: just two published in 2011 (Jason's The Isle of 100,000 Graves – also the only graphic novel I read this year – and George Pelecanos's The Cut), a pathetic number which rises to an equally pathetic four if we stretch "new" to include the previous year as well. So it seems clear I've become even more lodged in the past this year, although, since all the "old" books I've read are, in effect, "new" to me, designations such as "old" and "new" become essentially meaningless in this context – as indeed, in consequence, does this entire paragraph.

Therefore, let's move on to the third and final thing of note, which is that there was more of an even spread as regards the authors I read this year. Whereas in 2010 my reading was very heavily weighted towards Donald E. Westlake, 2011 has turned out to be rather more balanced, with a rough parity between Westlake, Anthony Price, Ross Thomas, Kate Atkinson, Elmore Leonard and one or two others. Quite what this signifies – if, in fact, it signifies anything – is, like many matters, beyond me, but it is a thing, and it has now, for better or worse, been noted (duly).