Next in this short run of posts on British suspense novelist P. M. Hubbard, the second of his two works for children: 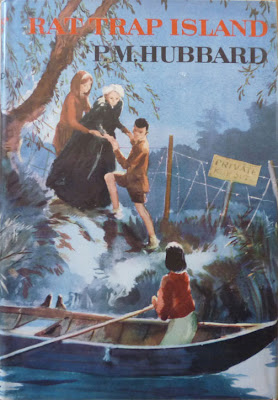 Rat Trap Island was first published in hardback the UK by Cassell & Company in 1964, the same year as Hubbard's second novel for adults, Picture of Millie (Michael Joseph). I blogged about Hubbard's debut kids' book – and possibly his debut novel – Anna Highbury during my initial run of posts on the author in May, and Rat Trap Island similarly documents the adventures of three children, in this case the Liddell brood – Carola, the oldest, and twins Jennie and Richard – who, following the hospitalisation of their mother, are taken by their father to their Aunt Maggie's for the summer, just outside the (fictional) village of Silbourne. The children find Aunt Maggie's garden leads down to a river, and begin exploring the stretch of water in a rowing-boat, soon discovering the heavily-wooded Rat Trap Island... 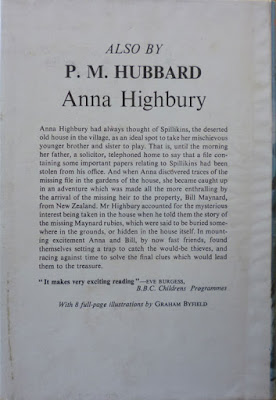 Much like Anna Highbury, the tone of Rat Trap Island is necessarily light – it is, after all, a children's book – but there are hints of Hubbard's obsession with a dark and dangerous rurality, reflecting the disturbed psyches of his protagonists (in his adult fiction; less so here). Take this passage, describing the children's first row-boat encounter with the island:

The trees grew thick on either side, and here there were no houses or gardens on the left-hand bank, only a wild willow-bank with the bigger trees towering above it. To their right, along the shore of the island, the screen was also dense, but this was hedges and bamboo clumps deliberately planted, and outside them, staked deep into the river bed, the poles of the barbed-wire fence. At intervals, white, forbidding and legible even from this distance, the notices said: PRIVATE. NO LANDING. KEEP OUT.

Note there the "dense", "deliberately planted" bamboo and hedges, the "forbidding" notices: typical of Hubbard's evocation of the countryside as a frequently hostile place – which is, of course, quite at odds with his own biographical background living peacefully in Guernsey, rural Dorset and Scotland.

The dustjacket painting on the Cassell edition of Rat Trap Island is credited to J. S. Goodall, who is, in fact, John Strickland Goodall, a painter and illustrator much admired and highly sought-after by collectors. Fans of Dora Jessie Saint's Miss Read novels will be very familiar with his work, which graced the covers and interiors of thirty-plus Miss Read books over a forty year period from 1955. Goodall's Victorian and Edwardian paintings are held in collections all around the world, and he also produced his own series of wordless children's books from the late 1960s onwards. 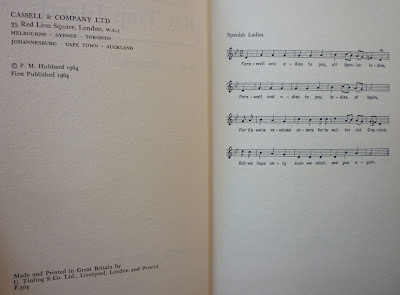 As with Anna Highbury, there was no American edition of Rat Trap Island, and the four copies of the Cassell first currently on AbeBooks are all in the UK or New Zealand. However, there was also a Children's Book Club edition, issued in the same year as the Cassell one and sporting the same dustjacket illustration; at present there are nine of those listed on AbeBooks, a couple from American sellers, so all is not lost if you're in the States and you want to get hold of a copy.

Let's move on to the third and final P. M. Hubbard post. And for that one I've got an edition of a Hubbard novel which not only boasts a personalised aspect that, to my knowledge, makes it pretty much unique among Hubbard publications, but also includes two related pieces of paraphernalia, one of which offers a fleeting but nevertheless instructive glimpse into Hubbard's life and work...
Posted by Nick Jones (Louis XIV, the Sun King) at 05:10