NB: This is the somewhat belated fourth instalment in the Great Tom Ripley Reread, which, as the overarching title suggests, entails me rereading, and then blogging about (in a prolix and frankly disturbingly gushing fashion), each of the five Patricia Highsmith novels to feature Tom Ripley, the man with no conscience. 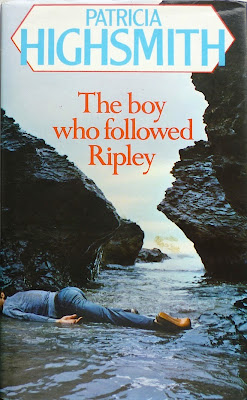 Of all the characters Patricia Highsmith created, Tom Ripley was the one she most identified with. After The Talented Mr. Ripley (1955) she returned to him four times – the only one of her leads to be granted a sequel, let alone four of the buggers – and each time there seemed to be more of Highsmith herself visible in the characterization of Ripley. Whether it be Tom's frustration at the haphazard nature of the telephone service in France, where Highsmith lived in the 1970s (Ripley Under Ground, 1970; Ripley's Game, 1974), his thoughts on spy novels, or indeed his politics (both Ripley's Game), his opinions are often seemingly simpatico with hers. And so it proves again in the fourth novel in the Ripliad: when Tom mithers about having to do his accounts in The Boy Who Followed Ripley (1980; UK Heinemann first edition, Bill Richmond cover, seen above) or has a pop at the Pompidou Centre in Paris (comparing it to a blow-up doll), the passages could have been lifted directly from Highsmith's own diaries or notebooks.

Which is, in effect, what happened for the segment of the book set in West Berlin, where Tom travels with Frank Pierson, the sixteen-year-old American heir to a fortune who has latched on to (and who idolises) him. According to Andrew Wilson's 2003 biography of Highsmith, Beautiful Shadow, Highsmith travelled to Berlin expressly in order to research her fourth Ripley outing, eventually reworking her own excursions, which she documented in her notebook, for the novel. After initially being confused by Berlin, over repeated trips Highsmith had become fascinated by the city, a fascination that's almost tangible in The Boy Who Followed Ripley: even during my first reading of the novel the Berlin section felt by far the most alive of the book, and that remained the case for my second go-through. 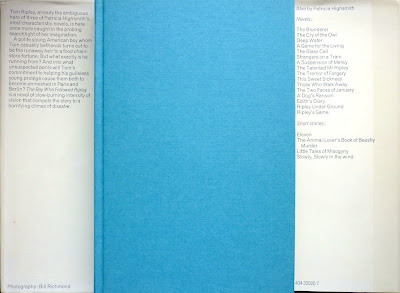 What the rest of the novel lacks is any real sense of existential danger for Tom. Where in The Talented Mr. Ripley, Ripley Under Ground and even, to an extent, Ripley's Game, Tom had to fight for his very survival – which is to say his liberty and his idle, comfortable way of life (in Ripley's Game, his own actions lead directly to an assault on his rural French home, Belle Ombre) – in The Boy Who Followed Ripley (which, in the mutable timeline of the Ripliad, is set roughly six months on from Game), the Berlin escapade aside (I'll return to that shortly), he's preoccupied for the most part with saving Frank from himself. The teenager tracks Tom down in France having heard of him thanks to a Derwatt painting (actually a Bernard Tufts fake) Frank's father owns (see Ripley Under Ground for the story behind Derwatt/Tufts). Tom soon learns that Frank's father, who was confined to a wheelchair, was killed when he fell from a cliff behind the family mansion just before Frank fled America, and that furthermore, Frank believes he was responsible.

What Highsmith is setting up here is yet another spin on her familiar theme of two men becoming strangely fascinated by and fixated on one another. The problem is that in this instance, it's a passive relationship for both parties. What made previous takes on the theme so compelling was the manipulative, malicious – and ultimately murderous – nature of at least one of the protagonists, whether it be Bruno in Highsmith's debut, Strangers on a Train (1950), or indeed Tom himself in Talented, Under Ground and Game. Here, however, Frank – despite apparently offing his father – is utterly guileless, while Tom takes on the guise almost of a mother hen – or, perhaps more accurately given the gay undercurrent of the relationship, a bear to Frank's cub.

Because although the twisted, violent impulses inherent in so many of Highsmith's male-on-male (as it were) dynamics are missing here, the subtext of homosexuality that's also often present – not least in the Ripley novels – is brought to the fore. The question of Tom's sexuality (or lack thereof) is a constant background buzz in the Ripliad; in The Talented Mr. Ripley it was evident that he was in love with Dickie Greenleaf (or at least the idea of Dickie), and his marriage to Heloise thereafter is, if not entirely sexless, then devoid of any noticeable passion. For her part, Highsmith always denied Tom was gay, although latterly she did acknowledge that he might have been suppressing homosexual tendencies. But in The Boy Who Followed Ripley, she addresses the question more directly than at any other point in the series.

Early on, when Antoine Grais, a friend of Heloise's, arrives at Belle Ombre unexpectedly, Tom – who we're explicitly informed is reading Christopher Isherwood's Christopher and His Kind – tells Frank to go upstairs in order to avoid awkward questions. Antoine catches a glimpse of Frank, apologisies for disturbing Tom, and then, with "a nasty curiosity", asks if his "friend" is male or female. "Guess," Tom replies. Frank clearly arouses in Tom a protective passion that's usually reserved for those times when he's engaged in deadly acts of self-preservation; when Frank admits to Tom that he killed his own father, uncharacteristically Tom grabs Frank by the throat and shakes him to dissuade him from running off. Not long after, Frank hides from Tom in the woods behind Belle Ombre as a kind of test; when Frank appears from behind a tree, Tom feels "relief, like an ache".

That episode is echoed by another once the action moves to Berlin, where Tom takes Frank on an impulse. Having spent an evening with Frank in a gay bar (where else?), the next day the two are walking in the woods at the edge of the city when Frank is kidnapped. Tom is shaken by this turn of events, "thoroughly shattered by the boy's – rape, in the sense that he had been snatched away". Subsequently, in order to retrieve Frank, Tom dons full drag, ostensibly as a disguise so he can follow the kidnappers who are holding Frank to ransom. Fully made-up, wearing a wig and dressed in a "very pretty" pink, white and transparent gown, Tom takes to the dancefloor of a gay club as he waits for the kidnappers, feeling "exhilarated and stronger", delighting in the freedom his disguise affords him.

Of course, this isn't the first time Tom has disguised himself: in Ripley Under Ground he assumed the identity of the painter, Derwatt, donning a fake beard and applying makeup, and his rescue of Frank – which he accomplishes still dressed as a woman – recalls some of the giddy, freewheeling insanity of that novel. And there are other nods to Under Ground besides, as well as to Ripley's Game: Ed and Jeff from the Buckmaster Gallery are mentioned, as is Murchison, the art collector whom Tom bludgeoned with a bottle of red; Tom is taking lessons for the hapsichord he bought in Game; and Tom's friend, the fence Reeves Minot, features again, along with a couple of fresh faces, two Berlin associates of Reeves's, Eric and Peter, who regard the legendary, unpredictable, mercurial – and, yes, courageous – Tom Ripley with something approaching awe. 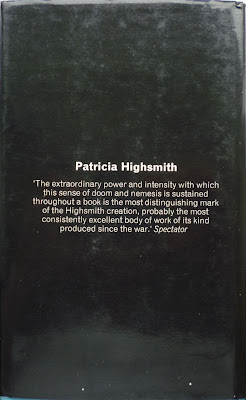 In the end, the sexual aspect of Tom and Frank's relationship is less important than the psychological one. Because at root the book is a study of a conscienceless man who wonders if he's perhaps found a kindred spirit: a killer, like himself; not quite on the same scale – just the one murder to Tom's "seven or eight" – but even so, someone he can guide, "steer", maybe even mould. That Tom is mistaken provides the tragedy in the tale; for Tom Ripley, the "font of evil" (as he so memorably puts it in Ripley Under Ground), can never truly be anyone's saviour – quite the opposite, in fact, as the gauche American couple who decide to stick their noses into the Murchison affair in the final book in the Ripliad, Ripley Under Water, discover to their cost...
Posted by Nick Jones (Louis XIV, the Sun King) at 09:30