Continuing this series on post-apocalyptic fiction, we move from a British hardback first edition of Pat Frank's Alas, Babylon... to the first British paperback edition of the same novel: 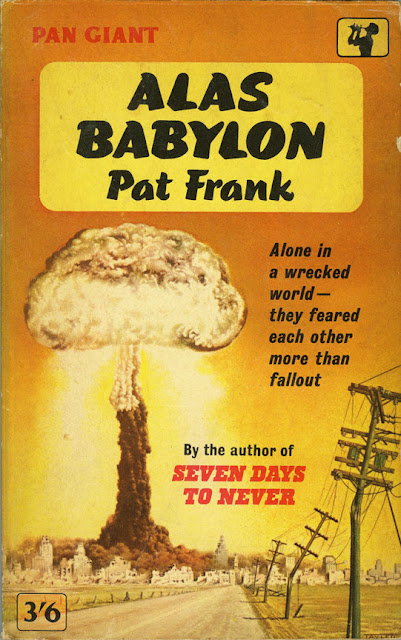 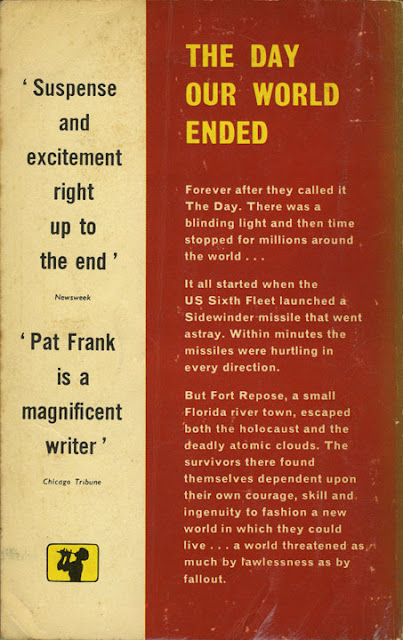 Published by Pan Books in 1961, this edition of Alas, Babylon typifies the style of cover art seen on paperbacks around this period, namely the more illustrative approach I alluded to in the previous post. For while the likes of Donald Green, John Rowland, Roy Sanford, Peter Probyn and Denis McLoughlin were deploying dramatic chiaroscuro, restricted palettes and abstract elements on British dustjackets of the period, Pan artists such as Sam Peffer, Rex Archer and, as seen on this edition of Alas, Babylon, David Tayler were opting for more literal interpretations of books' subject matter on paperback covers.

And you can't get much more literal than a mushroom cloud rising over a cityscape for Alas, Babylon – or, as the Pan front cover title has it, Alas Babylon – no comma. Curiously, the 1959 UK Constable hardcover edition also omits the comma on the front, although in both editions the comma does appear on the interior title pages. As for David Tayler, there is, as I've outlined before, virtually no information about him online: mostly what you get when you Google him are Existential Ennui hits. But I can tell you his Pan work included covers for C. S. Forester's Lieutenant Hornblower (Pan, 1957); Nevil Shute's A Town Like Alice (Pan, 1961) and Lonely Road (Pan, 1962); two Pan covers for Ian Fleming's The Diamond Smugglers (1961 and, I think, 1964); and, of course, this: 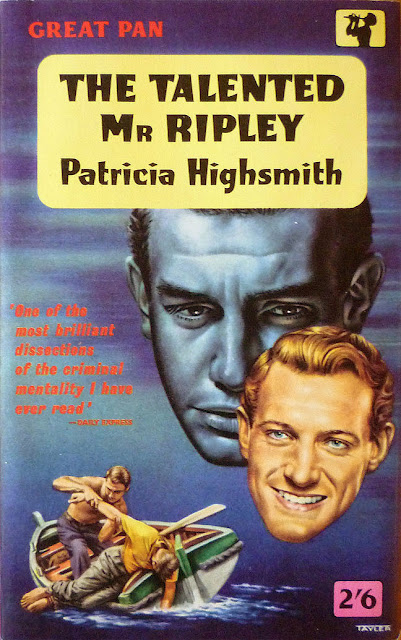 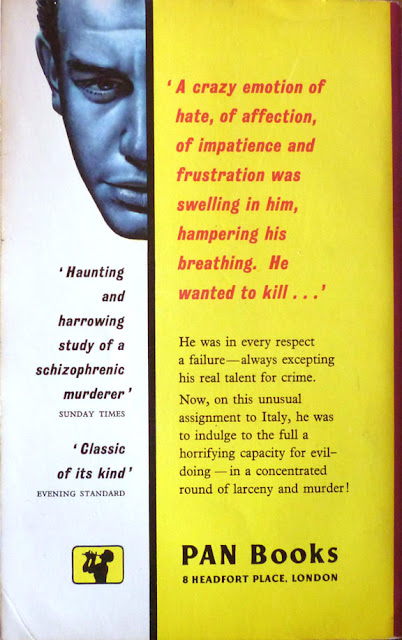 The 1960 Pan edition of Patricia Highsmith's The Talented Mr. Ripley. I've shown this one before, but as it's one of my most prized books, I'd hate to pass up an opportunity to show it off again.

I mentioned in the previous post that, while the Constable edition of Alas, Babylon is quite scarce, this Pan edition is even scarcer: at present AbeBooks has just three copies listed for sale worldwide. I was actually inspired to track down the Pan paperback – eventually finding one on eBay – having seen it on display at the British Library's recent "Out of This World" exhibition, one of the sections in which was about post-apocalyptic novels. And such was the case with the next end-of-the-world book I'll be blogging about, too: a 1964 novel which has gained an added significance in light of recent riotous events.

But before that, let's see if I can squeeze in a Westlake Score...
Posted by Nick Jones (Louis XIV, the Sun King) at 06:15