Interrupting the post-apocalyptic books posts briefly, here's a Westlake Score which has been the cause of a certain amount of consternation and confusion over the years, due to it being misidentified as an earlier edition of Donald "Richard Stark" Westlake's debut Parker outing: 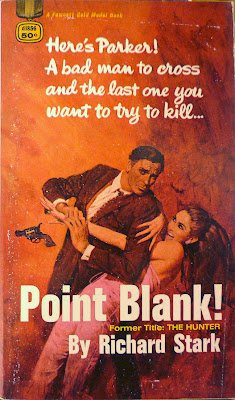 What it actually is, in fact, is the 1967 Fawcett Gold Medal printing of The Hunter – which was originally published by Pocket Books in 1962 – retitled Point Blank! But it's frequently – and mistakenly – pinpointed as being printed simultaneously with The Hunter, i.e. in 1962; take a gander at its listing on AbeBooks if you don't believe me. (The edition's listing on The Violent World of Parker is, needless to say, correct.) I was always curious as to why this was the case, so when I spied a fairly cheap copy lurking on Amazon Marketplace UK, I snapped it up, determined to get to the bottom of this minor mystery. (This is what passes for entertainment chez Jones.)

I'll reveal all in a moment, and also explore some other intriguing aspects of this Gold Medal edition. But first, a bit of background: from 1962 to 1966, Richard Stark's Parker novels were published in the States by Pocket Books – that's the Parkers from The Hunter to The Handle. Thereafter, the rights were picked up by Gold Medal, who published the four Parkers from The Rare Coin Score (1967) to The Sour Lemon Score (1969), all with glorious Robert McGinnis covers. But Gold Medal also reissued a couple of earlier Parkers, again with McGinnis cover art: they published an edition of 1966's The Seventh in 1968, retitling it as The Split, presumably to tie in with the 1969 movie adaptation; and in 1967 they published The Hunter as Point Blank! (I've blogged about the McGinnis/Gold Medal editions before on Existential Ennui, chiefly in this meandering post on the search for the perfect Parker.)

The retitling of The Hunter as Point Blank! was again inspired by a movie adaptation, in this instance John Boorman's brilliant 1967 Lee Marvin-starring film (as with the 1967 UK Coronet printing of the novel). And if you look closely at Gold Medal's paperback of Point Blank!, there's evidence to suggest the retitling was done rather late in the day. On the back cover, the movie blurb at the bottom seems hastily stuck-on: 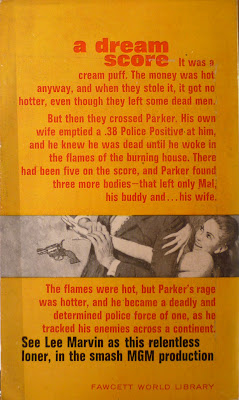 While inside, on the first page, there's what could almost be a hand-stamped additional movie blurb at the end of the book's blurb: 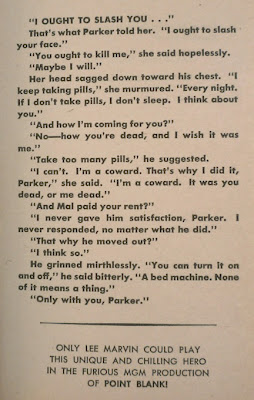 Finally, the text on the title page itself is kind of skewiff (it's a bit hard to tell from my rubbish photo, but take my word for it): 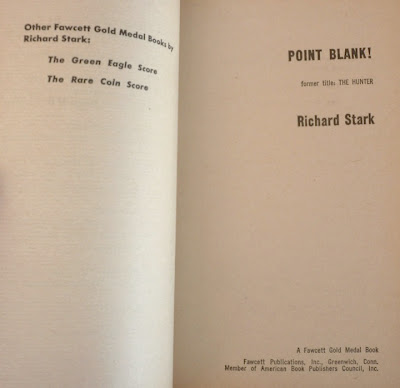 Given all this, I suspect Gold Medal only found out about Boorman's movie shortly before they printed the book, and had to quickly amend it accordingly. That might also explain the aspect of the book which has caused all the confusion over its publication date: the copyright info on page four. Take a look at that: 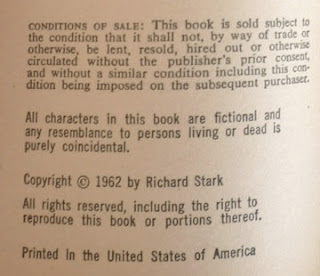 And you can see the only date there is the 1962 copyright line. There's no mention at all of this particular edition's pub date – hence the muddle on AbeBooks and other online booksellers.

There's one other thing I want to bring up before drawing a line under this post: my copy of Point Blank! came with a curious piece of paraphernalia inside it... 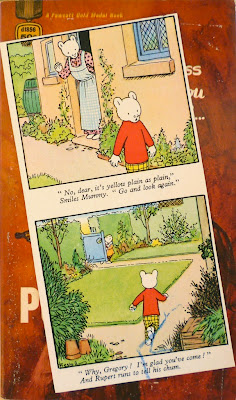 A cutting of a Rupert the Bear picture story. Of all the strange bits of ephemera I've found in secondhand books – letters, more letters, a postcard – that surely has to rank as the most incongruous...

And with that, let's return to the post-apocalyptic fiction, with a novel in which the kids are very far from all right...
Posted by Nick Jones (Louis XIV, the Sun King) at 04:48