A Shot in the Dark: Short Stories by Saki (Hesperus Press, 2006)

Well, after that short, intermittent run of posts on my holiday adventures – which, you'll recall, largely consisted of me dragging Rachel into secondhand bookshops all over the south of England – it's back to the books. I've got a clutch of reviews I'm intending to write over the next few weeks of novels I read whilst I was away, including one I bought during the vacation, as well as at least one (related) series of posts planned, on a newly-discovered (from my perspective) espionage novelist. But first I thought we could take a look at a book that I also acquired during my fortnight's holiday – except, rather than purchasing it, it was given to me: 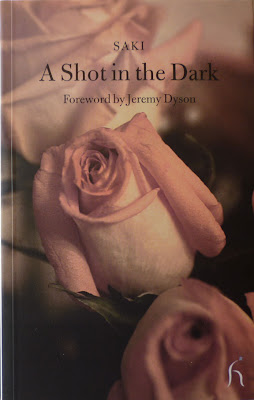 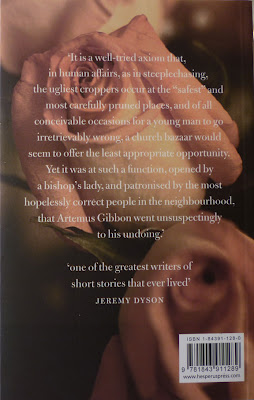 A Shot in the Dark was published in paperback by Hesperus Press in 2006, with a cover designed by Fraser Muggeridge studio, featuring an image by Lee Saper. A collection of short stories by Hector Hugh Munro – alias Saki – it was compiled by one Adam Newell, a longtime editor at pop culture publisher Titan Books. Now, those of you who've been paying attention at the back might dimly recall that I too once worked at Titan, so it shouldn't be a huge leap to make the connection between Adam and myself. Indeed, it was in large part for Adam's wedding – to the lovely Sharon Gosling, herself a talented editor-cum-writer – that Rachel and I travelled to Devon for our holiday the other week, and it was the day after that wedding that Adam gave me a copy of A Shot in the Dark.

I must confess to a certain level of ignorance about Saki; what little I do know about him comes from Adam, who's something of an expert. But the Cliff's Notes gen on him is he's widely regarded as a master of the short story form. In an all-too-brief career – he was born in 1870 and killed in 1916 during World War I – he produced around 150 or so pithy, mischievous, sly short stories (as well as two novels and three plays) which elegantly skewer the staid, stultifying Edwardian society of which he was a part. Some of the tales boast supernatural, eerie or unnervingly otherworldly – yet strangely commonplace in the way they're portrayed – elements, alongside, as Adam puts it in his introduction to A Shot in the Dark, "the ever-present threat of an unfettered, pagan wider world in which terrible things can, and usually do, happen".

I've yet to read all the stories in this collection; of the ones I have read, "Tobermory" stands out for me – a typically barbed tale of a talking cat whose cutting opinions of the guests at a house party introduce an amusing disquiet into proceedings (it's also one of Saki's best-loved tales). But the story behind the anthology is as fascinating as the thing itself. As Adam notes in his intro, the 140-odd Saki shorts that had been published prior to A Shot in the Dark were, for Saki fans, "all too soon devoured". Desperate for more Munro, Adam embarked on a hunt for uncollected stories, finding them in Munro's sister, Ethel's, long-out-of-print biography of her brother and enlisting the aid of Saki aficionado A. J. Langguth, who had combed through countless newspapers and magazines researching his biography of the writer, Saki: A Life of Hector Hugh Munro, in the process turning up a further six uncollected tales.

Armed with his bounty, Adam contacted Hesperus Press, whose modus operandi is bringing back into print little-seen public domain works by literary authors. Unsurprisingly they leapt at the chance to publish the scarcely-seen material Adam had ferreted out, the end result being A Shot in the Dark. And Adam even wound up on telly for his troubles, proving instrumental in the production of a 2007 BBC Four docu-drama, The Double Life of Saki, and appearing onscreen as an interviewee. All of which goes to show what a little dedication and persistence can achieve.

A heart-warming tale of fannish enthusiasm there (something I can certainly relate to). Next: Quiller.
Posted by Nick Jones (Louis XIV, the Sun King) at 06:15