A Guide to the Secondhand Bookshops of Devon, Cornwall, London, Sussex and Kent, and the Books I Done Bought in Them 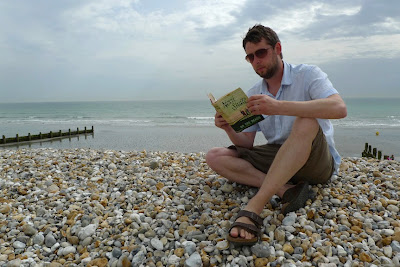 So, as anyone who's cast an eye over my two pictorial essays will have already learned, my two-week summer holiday proved to be something of a books bonanza – so much so that by the second week my long-suffering girlfriend had her head in her hands when I emerged from yet another secondhand bookshop basement clutching yet another stack of hardbacks, and was eventually reduced to tears when I left her in the cafe of Margate's recently-opened Turner Contemporary gallery to go on a feverish hunt for one last books emporium (I found it; it was crap). That Rachel indulged my passion/obsession with so little complaint and with such a dignified demeanour during the holiday (until she finally cracked, that is, which was entirely understandable) is to her eternal credit, and I can only apologise wholeheartedly and unreservedly to her.

Mind you, it wasn't all books books books, despite appearances to the contrary. Part of the reason we were in Devon was for our friends Adam and Sharon's wedding – more on them, or at least Adam, in a moment – and there was plenty of sightseeing too, around the north Devon coast (Ilfracombe and Appledore – as seen above left – were particular favourites) and along the Tarka Trail, and then in week two around Chichester (Pagham Harbour is a birdwatcher's paradise... not that I'm a twitcher or anything...), up in London and over on the Kent coast (the aforementioned Turner Contemporary, which is a wonderful building boasting stunning views across Margate bay and the sea).

Then again, I did drag Rachel along to the British Library (archivists of this very blog, lest we forget) to see the science fiction exhibition "Out of this World" (very good, and gratifyingly showcasing a handful of SF first editions I myself own, including The Difference Engine), and while we were there we also had a look at the excellent "Treasures of the British Library" show, among the exhibits of which was the first page of J. G. Ballard's typed manuscript for Crash, much scrawled over and corrected by the author.

Admittedly, then, books, and indeed bookshops, did loom large over the fortnight. The second week saw trips to such familiar secondhand stores as Kim's in Chichester, which turned up trumps with an inexpensive first edition of Nevil Shute's On the Beach – you can see me reading it on the beach (hey!) at East Wittering up top – plus books by Raymond Chandler and Douglas Adams; London's Any Amount of Books – where I scored Anthony Price and P. D. James firsts – and Henry Pordes, which was the bookshop that led to Rachel's despairing head-clutching episode when I found four pristine George Pelecanos firsts in the bargain basement; and the various shops of Tunbridge Wells, which gave up Kingsley Amis and Adam Hall first editions.

But there were previously unexplored shops as well, both in the second week – the rammed-to-the-rafters Albion Bookshop in Broadstairs stands out; I secured Joseph Hone and William Haggard firsts there – and particularly during week one's sojourn to Devon. Highlights there included Bideford's bijou Allhalland Books (a pleasant little shop, although not really holding much of interest to me); Barnstaple's SolBooks (certainly better than the same town's Tarka Books, which was rubbish; the negative comments on The Book Guide are entirely apt); Appledore's BookRelief, a cute, ramshackle, backstreet place where I picked up a very early Michael Crichton first; and especially Books by the Sea (pictured above left), over the border in Bude, Cornwall. That last one proved a real find: shelf upon shelf of fiction upstairs, and then a huge basement with even more fiction (among other non-fictiony things, plus some comics). I came away with first editions of Kingsley Amis (again), William Haggard (again), Fletcher Knebel, Michael Dibdin, Peter Ackroyd, Jack Higgins and Ted Allbeury. It's a bloody good shop, but astonishingly Books by the Sea isn't even listed on The Book Guide, which I always figured was pretty comprehensive. Bit of a glaring oversight there. 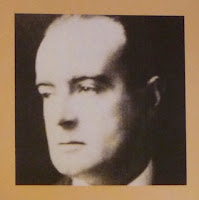 All of which means there are yet more names to add to the list of forthcoming delights on Existential Ennui. Christ knows when I'll get round to blogging about the majority of them, but some of them will appear sooner than you'd think. First, though, in the next post, I'm going to be featuring a book that wasn't bought by me on my holidays, but rather given to me – by the aforementioned newly-wedded Adam, who compiled the short stories contained within it, all of which were written by one Hector Hugh Munro, an author who's rather better known by his pen name...
Posted by Nick Jones (Louis XIV, the Sun King) at 08:17