So, from one edition of Elleston Trevor/Adam Hall's debut Quiller mission... to another: 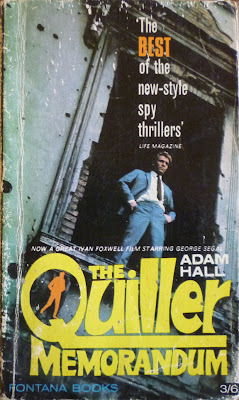 This is the 1967 UK paperback of The Quiller Memorandum, as published by Fontana. I spotted this copy lurking on the bookshelves outside – yes, outside – Lewes' famed 15th Century Bookshop. It has, as you can see, been battered by the elements – said shelves are shuttered when the shop is closed, but when they're open there's little protection from rain and so forth – but as I was in the midst of a Quiller collecting spree, I couldn't resist picking this paperback up – even though it's almost exactly the same as the book I blogged about in the first post in this series.

See, as outlined in that previous post, Hall's debut Quiller outing was originally titled The Berlin Memorandum when Collins issued it in hardback in the UK in 1965. But that, as it turned out, was the only instance the novel was destined to appear under that title (at least in English; there have been a few foreign language editions over the years bearing the same title). By the time the book was published in the States, by Simon & Schuster that same year, it had acquired a new title: The Quiller Memorandum (dustjacket front cover on the right there). And from that point on, in both the US and the UK, that was the title the book was published under.

I'm not sure why the title changed for that American edition. Possibly it was because the 1966 Michael Anderson-directed movie adaptation – for which the Fontana paperback is the tie-in edition; that's George Segal as Quiller on the front – was in the works by then, but not having a copy of the Simon & Schuster edition to hand (the cover above right was "borrowed" off the internet), I can't verify whether the then-forthcoming film is mentioned at all on the jacket. Certainly once the movie was out, I can see why that title stuck; but was the movie the reason for the title change in the first place? If any Quiller aficionados are reading – I know a few of you found your way to the previous post from the Quiller Yahoo Group – and know the truth of the matter, feel free to set me straight in the comments. 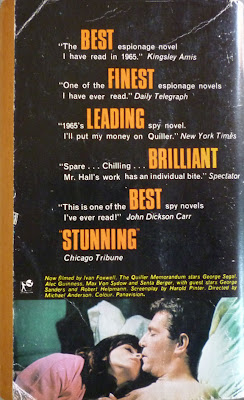 I haven't seen the 1966 movie (very remiss of me, I know – it's rare for me not to have seen a flick like this; must get meself a copy), but the excellent unofficial Quiller website has a page dedicated to it, which boasts links to various reviews, as well as to screenwriter Harold Pinter's own page on the film. Next in my Quiller-centric series of posts, however, I'll have a colourful British edition of Quiller's third literary mission... 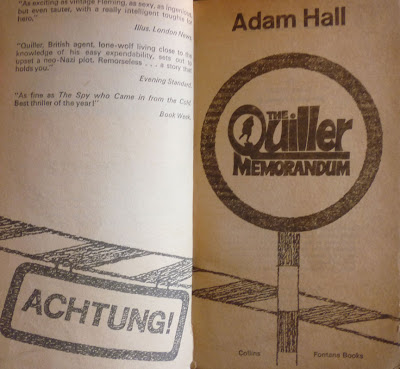