Regular readers of this blog – and astonishing as it may seem, there are one or two – will know that I haunt the charity shops of Lewes, the East Sussex town where I live etc., like a bearded, lanky but ultimately benign ghost, always on the lookout for new consignments of donated books to browse. It's a bit of a weird pursuit, but it's probably better than stalking or stamp collecting, and Lewes being a cultured kind of place you do find all sorts of interesting first editions turning up in its charity shops (and with all the books I've bought in them over the last few years, I reckon I could make a fair claim on the title of Lewes's Most Charitable Man... if such a title existed).

I've blogged about the fruits of my furtive rummaging before, such as the first edition of Jackie Collins's debut novel I found, or the 1976 edition of P. D. James's Cover Her Face, and I'll be posting some more recent finds quite soon. But as 2011 got underway, I noticed something odd happening in a couple of Lewes's charity shops: there was a sudden influx of fairly recent hardback first editions, all published in the last five years or so. It was most apparent in the Hospice shop opposite Waitrose; I wandered in there sometime during the first week of the new year, intending to have a nose at the hardback fiction shelves, and one of the assistants was clearing them off, sweeping books into a box and replacing them with new-looking hardback novels, mostly of a thriller or crime bent. And the thing was, almost all of them had British Bookshops price stickers on their covers.

At the time I just figured the local branch of British Bookshops was clearing some space in their stockroom: most of the books were slightly cocked, suggesting they'd been stacked somewhere and forgotten. But then I began to notice other charity shops were suddenly full of recent hardback novels too, not just in Lewes but in Brighton, and all of those books bore British Bookshops price stickers as well.

In retrospect I suppose these were the first signs that something was up with the chain; it seems likely that having gone into administration at the start of 2011 the various British Bookshops stores were dumping excess stock and file copies on charity shops. But at the time, I must admit I simply thought to myself, 'Brilliant! Cheap first editions!', and bought a stack of 'em. Such as these: 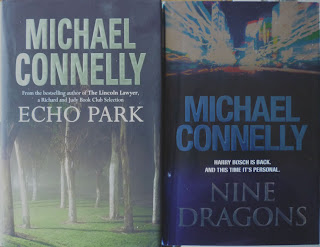 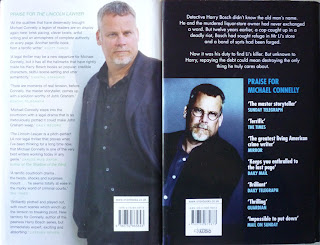 UK hardback first editions/first printings of Echo Park and Nine Dragons by Michael Connelly, published by Orion in 2006 and 2009 respectively, and bought in the Hospice shop for a quid each. I've since seen a bunch more of Connelly's novels turn up in other charity shops, in particular the Brighton Oxfam Books, again looking suspiciously like British Bookshops stock, but never having read any of his work, I decided to stick with these two for now. I seem to recall Book Glutton rates Connelly, so mebbe he can tell me if these two novels, which both feature homicide detective Hieronymus "Harry" Bosch, were worth picking up.

The jacket design on Echo Park is by Sue Michniewicz, who apparently is a keen biker, while the author photo is by Wendy Werris. The jacket design on Nine Dragons, meanwhile, is by Nina Tara, and the author photograph Mogjami Azimi. As for the other British Bookshops cast-offs I nabbed, well those will form the basis of future posts, although I'll just say here they're all by a certain comedian-turned-crime writer...
Posted by Nick Jones (Louis XIV, the Sun King) at 04:29