The various charity shops of Lewes – the East Sussex town where I live and work – and Brighton – the seaside town near to the town where I live and work, which I occasionally visit – are an abiding preoccupation here on Existential Ennui, specifically the second hand books stocked by those shops. Just the other day I was wittering on about the Hospice charity shop opposite the Lewes branch of Waitrose, and how they'd largely cleared their fiction shelves of unwanted BCA editions in favour of cocked cast-offs from the financially troubled British Bookshops up the hill. But there are still one or two older hardback novels nestling on the Hospice shelves, and it's from amongst those that I plucked this for a pound: 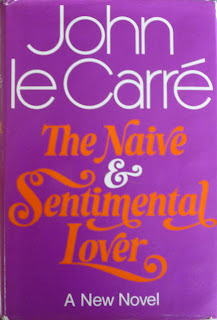 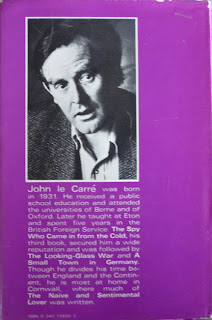 A UK hardback first edition/first impression of John le Carre's The Naive and Sentimental Lover, published by Hodder & Stoughton in 1971. It's probably the most atypical of Le Carre's novels in that it's not set in the murky world of espionage; instead it details the complicated love life of one Aldo Cassidy, and is partly autobiographical, based on the author's relationship with a couple following the breakdown of his marriage. It was Le Carre's sixth book, coming after a run of hugely successful spy thrillers, and judging by the dustjacket blurb Le Carre's publisher was at pains not to alienate his legion of fans.

"The Naive and Sentimental Lover is not a breakaway book," runs the back flap copy. "In describing the agonising night-walk of a man caught between the two sides of his aspiring nature, John le Carre has lost nothing of his skill in narrative and suspense. But in the humour, the pain and the love with which he relates the rise and fall and striving of Aldo Cassidy, we witness the full flowering of his talents. This is a marvellous and magnificent book." Le Carre himself apparently disagrees these days: in 2008 he described the novel as a "toe-curling embarrassment".

The dustacket on this first edition was designed by typographer Tony Geddes, while the author photo is by Andreas Heumann. And that's the last of this little run of Lewes Book Bargains (there'll be more down the line). Tomorrow I'll have a teaser for a series of posts next week on Elmore Leonard's Raylan Givens stories and how they stack up against the TV adaptation Justified, the second season of which begins airing in the States on Wednesday. Ooh, get me and my well-timed blogging...
Posted by Nick Jones (Louis XIV, the Sun King) at 06:00