Lewes (British) Bookshops Bargains: Doctor Who: The Coming of the Terraphiles by Michael Moorcock, Darkside by Belinda Bauer, Worth Dying For by Lee Child

As I believe I've mentioned before (ahem), Lewes, the East Sussex town in which I live, is blessed with bookshops. An unhealthily obsessed book collector would be hard pressed to find a more suitable town in which to live, the major metropolitan areas and Hay-on-Wye aside. But most of the bookshops in Lewes, excellent though they are in their own ways, are of the second hand variety. When it comes to new books, we're slightly less spoilt for choice. There's Skylark in the Needlemakers, which offers quite a good selection of books but a very limited range – leaning towards the literary end of the scale – of new fiction; there's WHSmiths, which is fine for celebrity memoirs but not much else; and there's British Bookshops/Sussex Stationers.

British Bookshops/Sussex Stationers, for those who don't know, are a chain of bookshops/stationers based in South East England, selling, as the name suggests, new books, greetings cards, pens, paper, and so forth. As bookshops go, they don't have the depth of stock of, say, Waterstones, but they are quite good on new fiction, both hardback and paperback. And not only that, but their prices compare very favourably with Amazon. If you know when a novel's being published – which, dullard that I am, I usually don't – you can nip in and pick it up pretty cheaply. The one in Lewes is good for new hardback fiction, but being out in the sticks, it doesn't always get first printings of hardbacks. Or rather, if it does, I'm too slow to bag the buggers. But even so, when there's a new book I want to get my filthy mitts on, I head for the Lewes British Bookshops first.

Sadly, I may not be able to for much longer, because at the end of last week it was reported that the chain has gone into administration. A buyer is being sought apparently, but if one can't be found, it'll be game over, with the loss of up to 300 jobs across the region. That's bad enough, but it'll also mean that the best place to buy new books in Lewes will be gone. And by way of example, here are three books I bought there recently: 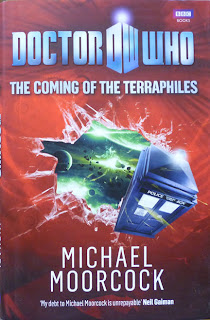 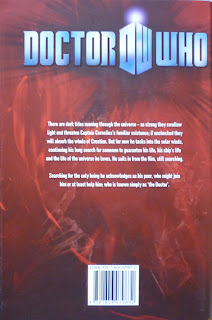 This is the UK first edition hardback of Michael Moorcock's Doctor Who novel, The Coming of the Terraphiles, published at the tail end of 2010 by BBC Books. I bought this in the Lewes British Bookshops just before Christmas for £8.99, which is about what you'd pay on Amazon. Moorcock is of course a huge name in fantasy and SF circles, a major influence on Neil Gaiman, Alan Moore, and many more besides; it was big news when it was announced he'd be writing a Who novel. Coincidentally I'll have some news on Mr. Moorcock – in a tangential way – very soon, but in the meantime, if you're after a review of Terraphiles, there's a good one over at SFX. As for the dustjacket, that was designed by Lee Binding at teaLady. 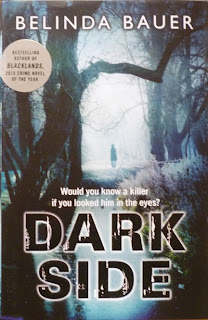 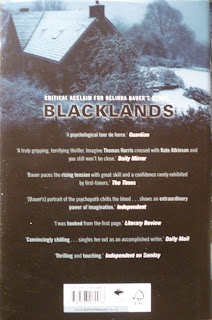 A UK hardback first edition/printing of Darkside by Belinda Bauer, published just this month by Bantam and bought just this month by me in British Bookshops, Lewes. Again, I paid round about what Amazon are charging online. I read Bauer's debut, Blacklands, last year, and really liked it, as did many others: it ended up winning the CWA Gold Dagger. This follow-up is set in the same fictional Exmoor village; Keith at Books and Writers has a review up here, and WriterMel at High Heels and Book Deals has a review here and an interview with Bauer here (and you can read my review of Blacklands here). The dustjacket was designed by Claire Ward, creative director at Transworld (Bantam's parent publisher), who also designed the jacket for Blacklands and the rather lovely cover for Kate Atkinson's Started Early, Took My Dog, while the front cover photo is by Mark Owen (no, not that one) of Arcangel.

Lastly, we have this: 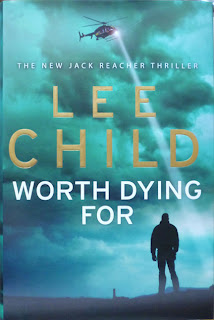 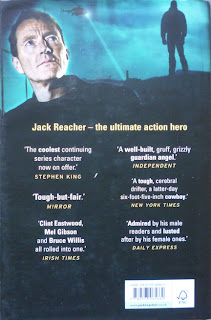 A UK hardback first edition of Worth Dying For by Lee Child, with a dustjacket designed by Transworld's assistant art director Stephen Mulcahey – who, oddly enough, was also responsible for the back cover photo of Darkside (I think). Child's most recent Jack Reacher novel (I'm currently reading the first one, Killing Floor), it was published by Bantam in September 2010, but I only bought this copy the other day in British Bookshops. Reason being, the hardback's already been through multiple printings, and I'd missed out on a first printing – if British Bookshops even had any in the first place. But I was in there last week and happened to find this copy, which is a first printing (i.e. it has the full strike-off line on the copyright page). And not only that, but it was even cheaper than the Amazon edition.

So there you go. Those are some books I bought recently in the Lewes branch of British Bookshops. To any Lewesians reading this, should British Bookshops make it out of administration, next time you need to buy a new book, spare a thought for a local book-obsessed nutter and perhaps buy it in the Lewes outlet. Because I'll be most upset if it closes for good.

UPDATE 1: I got terribly excited just now because I thought British Bookshops had been sold today. Sadly, it hasn't – the news piece I found was from 2009. But I can report that the shops will carry on trading for a few weeks while a buyer is sought. Fingers crossed...

UPDATE 2: Forty people have been laid off at British Bookshops' head office and in their warehouse. Obviously that isn't great for those who've lost their jobs, but there are no redundancies at the shop level yet, and there's a possibility of a management buyout, so the Lewes British Bookshops may yet survive.
Posted by Nick Jones (Louis XIV, the Sun King) at 05:57