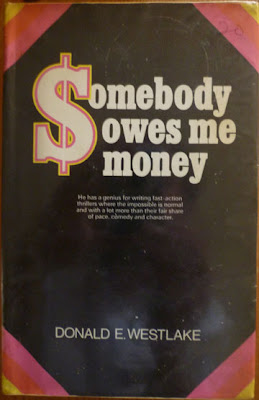 A 1970 UK hardback first edition of Somebody Owes Me Money, published by Hodder & Stoughton, originally published by Random House in the States in 1970. I'm quite pleased with this one; it's ex-library (from Forest Hill Library, in fact, which is a few miles from where I grew up in south London), but it's in really good nick, and there are, far as I can tell, only two copies of this edition online anywhere, and those are in New Zealand and Australia (and also ex-library). This one's about a New York cab driver who places a bet on an outside horse, wins, and then tries to collect his money; except his bookie has been murdered, and the cabbie ends up mixed up with gangsters. It's got a great opening line: "I bet none of it would have happened if I wasn't so eloquent." Should be a good read.

The other moolah-themed Westlake book to arrive was this:

A 2009 UK first edition hardback of the twenty-fourth and final Parker novel, Dirty Money, written, of course, under his Richard Stark nom de plume and published by Quercus. I took a chance on a cheapo Amazon copy of this one and luckily it paid off this time: it's virtually brand new (which, considering it was published last year, shouldn't be too surprising). Unlike the painted covers on the Robert Hale editions, the jacket on this one is a photo (courtesy of Getty Images), which is standard for books these days, more's the pity. Anyway, the arrival of Dirty Money means I'm now only missing one Parker novel, the penultimate one, Ask the Parrot. But I should have that very soon indeed...
Posted by Nick Jones (Louis XIV, the Sun King) at 04:18