This one was an Amazon find rather than an eBay score, but in the brave new world order of Donald Westlake acquisitions (see previous post), it now qualifies as a Westlake Score. And I'm rather pleased with this one:

A 1971 UK hardback first edition of The Hot Rock, published by Hodder & Stoughton (originally published by Simon & Schuster in the US in 1970). The Hot Rock, as I'm sure we all know, is the first of Westlake's John Dortmunder series – a more hard-luck version of Parker. This first British edition is rather rare: there are a few pricey copies on AbeBooks from New Zealand and Australia, but that's about it (I bought the only Amazon copy). The dustjacket seems to be Hodder's house style from that period (either for Westlake in particular or more generally – I'm not sure which); it's very similar to the jacket on my copy of Somebody Owes Me Money (both designed by Lipscombe, Lubbock, Ewart & Holland):

And speaking of Somebody Owes Me Money, unlike The Hot Rock, which just has text about previous books on the back of the jacket, my Hodder first of Somebody sports another photo of Westlake. But whereas the previous jacket photo I posted, from the back cover of my Random first of Pity Him Afterwards, had Westlake looking super-cool, the pic on the back of Somebody is... well... super-dorky. Compare and contrast – Pity Him Afterwards on the left, Somebody Owes Me Money on the right: 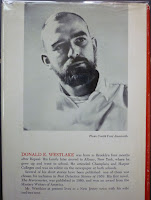