As outlined below, this was the other of my Oxfam Finds, although, as I mentioned, I went into the Tunbridge Wells Oxfam Bookshop with a fairly good idea that they had this. Then again, you can never tell with AbeBooks: quite often listings don't get taken down even after a book has sold. Anyway, here's what I was after:

It's a US hardback first edition of Joe Gores' Dead Skip, his second novel (following 1969's A Time of Predators), published by Random House in 1972. There's a number of copies of this online, but a lot of those are Book Club editions or later printings. This is a genuine first: the strike-off line runs to '2' on the title verso, with 'First Edition' written underneath, which was how Random denoted their first printings back then (as I've rather tiresomely blogged about before).

But that's not the only reason I wanted to get it. For one, as The Violent World of Parker has helpfully pointed out, Dead Skip shares a scene with one of Richard Stark's Parker novels, Plunder Squad (Parker #15, fact fans, which I also own in a Random first edition). In Plunder Squad, a man knocks at the door of the house where Parker is planning a heist. Parker answers... and the man turns out to be Dan Kearny, one of the characters in Dead Skip, who's investigating the attempted murder of one of his agents. Kearny is the owner of Dan Kearny & Associates (or DKA), a car repo company that gets involved in mysteries; Gores wrote a series of DKA novels, of which Dead Skip is the first. (I've got a review of Plunder Squad right here and a review of Dead Skip right here.)

So there's that Parker connection. But there's more. Because the Tunbridge Wells Oxfam Bookshop's listing for Dead Skip on AbeBooks stated that this was a signed edition. And not just signed, but dedicated too. That got me intrigued. I mean, I figured it would probably only be something along the lines of "To Phil, best wishes, Joe" or something, but seeing as we were gonna be in Tunbridge Wells anyway, I thought, what the hell, might as well have a look.

When we got to the shop, I couldn't see the book anywhere – not on the shelves, not even behind the counter in the display cabinet. I didn't get my hopes up, but I asked the nice lady behind the counter if she knew of it, and after asking for the title again, and then again, she made a call on a knackered old wall-mounted phone that kept cutting out, presumably to some secret underground bunker where Oxfam evidently keep all the really good shit, and after a while a door opened and another lady popped out, book in hand, and my heart leapt (oh shut up). It was a lovely-looking copy, showing practically no signs of the nearly forty years it'd been in existence, so I opened it up to have a butcher's at the signature and the dedication. And oh, my word, what a dedication: 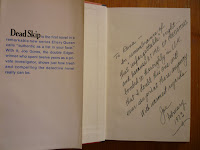 Here it is again for a clearer view:

And if you still can't see that it reads:

In remembrance of that "unforgettable" night... and because A TIME OF PREDATORS bombed so thoroughly in U.K. that I doubt this one will ever see print there anyway. With warmest regards

Obviously I bought the book, and I've been pondering the inscription ever since. For a start, Gores was wrong about Dead Skip: the novel was published in the UK, later in 1973, by Victor Gollancz. And then there are the questions. Who was Rona? I'm guessing she is/was British, hence the later reference to the UK, and Gores must have known her to some extent to have given her a first edition inscribed so. I kind of think he sent her the book, rather than dedicated it at a book signing or some such: if it had been at a signing, it would've been a UK edition, and anyway the inscription is too personal for that. But what was the "unforgettable" night? Placing "unforgettable" in quotes like that is a knowing wink: Gores probably isn't referring to anything romantic, but whatever happened on that night – a drunken party? A disastrous dinner? – seems to warrant an "unforgettable" that could be misconstrued by an 'outsider' as something else – and intentionally so, like an inside joke.

I hate to say it, but I guess for the book to have ended up in a charity shop, Rona may well no longer be with us. If you owned a book with such a personal inscription in it, you wouldn't surrender it to charity unless it was out of your control; you might sell it, if you really had to, but giving it away? Unlikely, particularly as it's clearly been kept in such great condition. I suppose I'll never know the answer to that one – or indeed to my other questions.