The Curse of the Collector

Yes, dear friends, I have embarked on yet another fool's errand. I've started hunting down Allison & Busby hardback editions of Richard Stark's Parker novels. Now, bear in mind these aren't actually first editions; they date from the 1980s, twenty years after the books were first published in the States. But they are the first British hardback editions. Prior to these, the Parker novels were only available in the UK as paperbacks from Coronet (although with neat silver double-covers, the title of each book to be seen through a 'burn' hole in the outer cover). As a result, the Allison & Busby editions have become highly collectable... and in some cases highly pricey... and in other cases, highly impossible to find.

There are sixteen Parker novels in the original run (Stark brought the character back in a second series in the nineties/noughties), and today's post brought two of them: 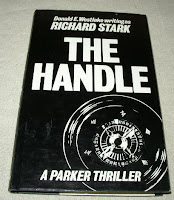 That's The Outfit (Parker #3, A&B edition 1988, original US printing 1963) and The Handle (a.k.a. Run Lethal, Parker #8, A&B edition 1985, original US printing 1966). And yes, it does seem as if Allison & Busby published the novels out of sequence, which must have been a bit annoying at the time. Then again, pre-internet/wikipedia, it wasn't always easy to work out what all the novels in a particular series even were, let alone what order they came in.

So then. Two down, fourteen to go.

Ooh, and this turned up today too:

Pity Him Afterwards, Donald Westlake's fifth novel under his own name (Richard Stark was one of his pseudonyms). This is the 1964 American first edition, which I managed to find online. It's about a crazed killer, but beyond that I know nothing. Another early Westlake also turned up a few days ago, Killy, which is about a union rep's fall from grace. That one is a UK first edition, also from 1964, a year after the US edition, and published by Boardman as part of their American Bloodhound Mystery series. I can't find a scan of the cover online, but the jacket sports a great illo of the title character (in white and grey, with a red heart in front of the book's title) by Denis McLoughlin, who was Boardman's art director.

And I should have some more Westlake/Stark news soon...
Posted by Nick Jones (Louis XIV, the Sun King) at 10:48