Looking for the Perfect Bond (and Ripley too)

I think I might have blogged before about visualizing characters when reading novels, most likely in relation to Tom Ripley in the Patricia Highsmith novels (seeing as those books are an abiding obsession). I tend to see a version of John Malkovich when I read the Ripley sequels (Ripley Under Ground onwards), probably because I saw the film version of Ripley's Game before I ever read the novels, and Malkovich was so great as Tom. Interestingly, however, when I read The Talented Mr. Ripley, I didn't visualize Matt Damon as Tom, even though I'd seen the film first. I think I conjured up my own interpretation of Tom when I read the book, based, I imagine, on Highsmith's description of him. And actually, when I bought the Pan edition of Talented later, how I'd imagined Tom chimed with how cover artist David Tayler depicted him:

That's Tom in the background (and that's a good take on Dickie in the foreground too). Why I didn't visualize Matt Damon as Tom I really don't know. He was certainly excellent in the film, as were all the cast. But in any case, I started thinking about representations of characters on book covers, and how they match up to our own image of a character, which I'd suggest is a strange alchemy of the author's descriptions and the things they make the character say and do, and often a memory of a person (an actor maybe) from our own experience (and not necessarily from a movie adaptation of that particular novel).

Tom Ripley isn't the best example for an exploration of this, however. From what I've seen, very few of the various editions of the Ripley novels feature a depiction of Tom on the cover; painted covers fell out of fashion in the 1970s (when the Ripley sequels started), so only Talented seems to boast one or two artistic interpretations of Tom. There's the above Pan edition; there's the US Coward-McCann first edition, which is a simply a nondescript line drawing:

and there's the Dell paperback, which, though rather a nice painting, is a little too demonic a depiction for my liking:

A look at the James Bond novels, however, particularly the Pan editions, provides much more food for thought. In each of the novels Ian Fleming describes Bond as good-looking, but also cold and somehow menacing, with blue-grey eyes, dark hair (with a lock that falls over his brow like a comma), and a scar on his right cheek. Of all the movie Bonds, Sean Connery is the closest to how I visualize 007 when I read the novels. But of course the first Bond film, Dr. No, didn't arrive until 1962, so there were nearly ten years' worth of Bond book covers (Casino Royale was published in 1953) that didn't have Connery as a reference.

It's interesting to look at how the various cover artists depicted Bond in these pre-movie years. The 1955 Pan edition of Casino Royale features a rather suave and decidedly blond Bond on the cover, as painted by Roger Hall. Perhaps Hall didn't have the opportunity to read the book before creating the artwork, but if nothing else it set a precedent for Daniel Craig (although Craig is rather more rugged-looking) some fifty years later:

Josh Kirby's painting of Bond for the 1956 Pan edition of Moonraker isn't a great help in the visualization of the character: the dark hair is there, but the face is too small to glean much information from:

Rex Archer's take on Bond for the 1957 Pan edition of Live and Let Die hews closer to Fleming's description: the hair is certainly dark, and the lock seems to be falling over his forehead, but there's something not quite right about the face. To my mind Bond doesn't look steely enough:

Archer had another crack at 007 on the 1958 Diamonds Are Forever Pan, but as with Kirby's Moonraker, the figure is too indistinct to be of much help:

For the 1959 Pan edition of Casino Royale, artist Sam Peffer does a good job on the lock of hair over the forehead, but he seems to have based Bond's likeness on Robert Mitchum, which doesn't feel right to me. Bond's face is a little doughy, and he looks more like a gangster than the chiselled secret agent he should be. Still, I rather like this one, and I'd say this is the most Bond-like Bond so far:

Even better is Peffer's painting for the 1959 Pan Moonraker. Again, Bond is a tad thuggish, but it's a strong painting, and I could quite easily take elements of this version for visual reference when I'm reading the novels:

For my money, though, we really hit paydirt on the 1959 Pan edition of From Russia, with Love. Once again, the artist is Sam Peffer, but here he paints almost a completely different man from his previous attempts. The thuggishness and monobrow are gone, the hair and features look right, and if I had no other reference, this would almost be the perfect Bond to picture as SMERSH's fiendish trap for Bond is sprung:

Still, all that said, none of these covers quite do justice to the image of Bond I hold in my head when I read the books. And I don't really see Sean Connery either, or Timothy Dalton (and definitely not Roger Moore, Pierce Brosnan or Daniel Craig, good though they all are in different ways). So who do I see? Well, I think this is closest to the Bond I hold in my mind's eye:

That's Bond as drawn by Yaroslav Horak, artist on the James Bond comic strip that ran in the Daily Express from 1958. Horak didn't come on board as artist until 1966, by which time the Connery movies were well underway. But the artist doesn't appear to have based his Bond on Connery. Instead, he looks to have taken his inspiration direct from the Fleming novels. Horak's predecessor, John McLusky, also produced a first rate 007:

But it's Horak's Bond I see when I read the books, although I'm not really sure why. A while before I began reading the Fleming novels I worked on Titan Books' reprint volumes of the James Bond newspaper strip, so it may be they left more of an impression that I realised at the time. Actually though, I think it's simply that Horak captured the character more effectively than anyone before (and possibly since). For me, then, this is the perfect Bond: 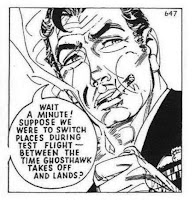 (Steve Holland's brilliant Bear Alley blog proved invaluable in my 'research' for this post. Thanks Steve!)
Posted by Nick Jones (Louis XIV, the Sun King) at 04:28