A Big Long List of the Comics, Graphic Novels and Books I Read in 2019

I've barely had time to think over the past few months, let alone blog. Besides editing Star Trek Magazine – the next one, #74, is out in January – and related specials – a Star Trek: Voyager 25th anniversary one is out in February, followed by a Star Trek: Picard one in March – I've also written my fourth book (mostly; still a few bits to do in the new year). That will be out May 2020, and is about comic book covers. Doubtless I'll be banging on about that nearer the time, but the net result of all that is that I've been working flat out – hence the absence of posts here. 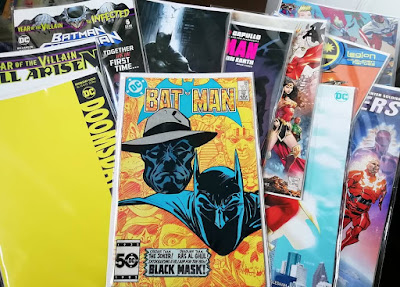 I have, however, been keeping track of what I've been reading – comics for the most part, plus a couple of science fiction novels. Next year I'd like to get back into prose fiction, but I've still got a fair way to go on Doug Moench, Don Newton, Gene Colan et al's Batman and Detective run (and have just unexpectedly secured the one issue I was missing, the elusive Batman #386, featuring the first apperance of Black Mask), plus sundry other back issues/rereads (Scott Snyder and Greg Capullo's Batman; Marv Wolfman and George Perez's New Teen Titans; Gerry Conway and George Perez's Justice League of America; Paul Levitz and Keith Giffen's Legion of Super-Heroes; Roy Thomas, Rich Buckler and Jerry Ordway's All-Star Squadron; J. M. DeMatteis and Mike Zeck's Captain America, and too many others to mention) – and that's without factoring in new comics. So we'll see if I manage to read any novels in the new year.

Anyway, here's what I read this year. Merry Christmas.