I'm of a mind to post some of the signed books I've acquired over the past year or two – at least, I'm of a mind as I type this; whether or not I'll remain of a mind to do so, or indeed retain any enthusiasm for blogging whatsoever, remains to be seen. For now, though, here's a pair of signed Patricia Highsmith books, both of which are novels in my abiding obsession, the Tom Ripley series. 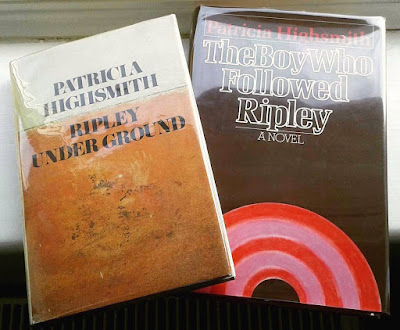 On the left is a 1970 US Doubleday Book Club Edition of Ripley Under Ground, the second novel in the five-book Ripliad, and on the right a 1980 US Lippincott & Crowell first edition of The Boy Who Followed Ripley, the fourth novel in the Ripliad. The dust jacket design on Ripley Under Ground is by Alex Gotfryd, while the dust jacket design on The Boy Who Followed Ripley is by Pat Voehl. 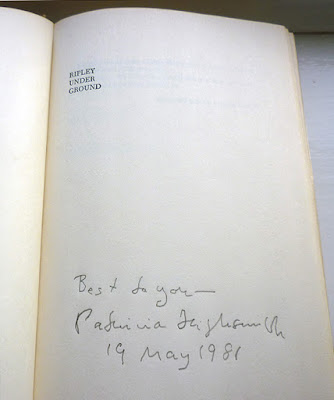 Ripley Under Ground has been signed, inscribed ("Best to you") and dated (19 May 1981) by Patricia Highsmith on the half-title page – in pencil, unusually (every other signed Highsmith book I own – a dozen in total – has been signed in pen). As noted, it's a book club edition, which ordinarily would make it less interesting to me, but it's the only signed copy of Ripley Under Ground – not just one of my favourite novels in the Ripliad but one of my favourite Highsmiths, and therefore one of my favourite novels, full stop – in any edition I've ever come across, so it's a remarkable thing indeed. 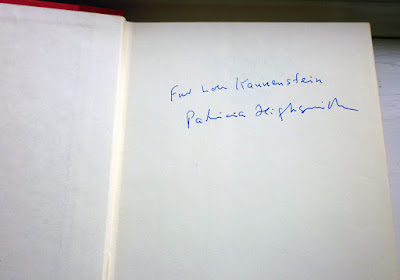 The Boy Who Followed Ripley is an association copy, signed by Highsmith on the front free endpaper and inscribed to Lou Kannenstine – or rather "Kannenstein", as Highmith has misspelled it. Kannenstine, who died in 2014, was the publisher of Foul Play Press, an imprint of Countryman Press which issued crime and mystery novels by, among others, Reginald Hill, Max Allan Collins and another abiding preoccupation of mine, Donald E. Westlake (the three Grofield novels written as Richard Stark). 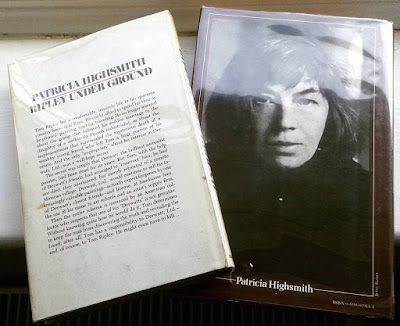 I've added both books to the Existential Ennui Patricia Highsmith First Edition Book Cover Gallery (under 'Patriciaphernalia'), where my inscribed association copy of the fifth Ripley novel, Ripley Under Water, also resides – meaning I now own three-fifths of the Ripliad in signed editions (two copies in the case of Ripley Under Water). And if the mood takes me, I'll be posting some other signed Highsmiths soon.
Posted by Nick Jones (Louis XIV, the Sun King) at 05:25