When is a series not a series? Or rather, where is the line between a series, and a not-series? If, three books into what one has been reliably informed is a series centring on a nefarious Whitehall department, there have been no recurring characters, no nods to the events of the two prior novels, and the activities of that nefarious Whitehall department – which is variously referred to as "the department" and "the Department" (even in the course of a single book), leading one to doubt whether it's the same department (or Department) at all – range from penny-pinching to blackmail to genuine defence of the realm, does the purported series still qualify as a series? 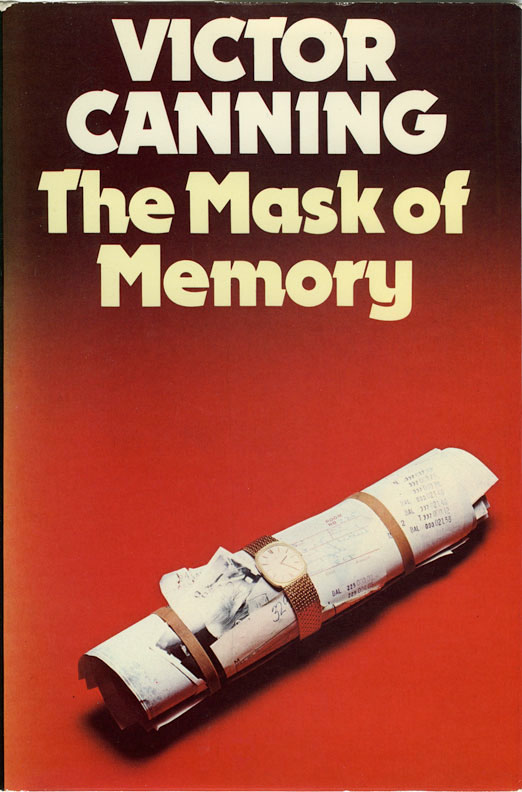 Answer: possibly. Or rather: yes and no. Thus far I've only read the first three of Victor Canning's Birdcage spy novels – Firecrest (1971), The Rainbird Pattern (1972) and, most recently, The Mask of Memory, which was published by Heinemann in 1974 under a dust jacket bearing a Bill Richmond photo (which, naturally, I've added to the Existential Ennui British Thriller Book Cover Design of the 1970s and 1980s page) – so I'm not about to quibble with Canning and Birdcage aficionado John Higgins when he asserts that Birdcage is a series; but I do wonder whether Victor Canning himself was aware he was writing a series by the time he got to The Mask of Memory. Because it seems to me it's just as likely, whatever evidence later (unread, by me, as yet) Birdcage books may present to the contrary, that he was simply using the notion of a nefarious Whitehall department as a peg on which to hang explorations of those perennial espionage fiction themes, love and betrayal. 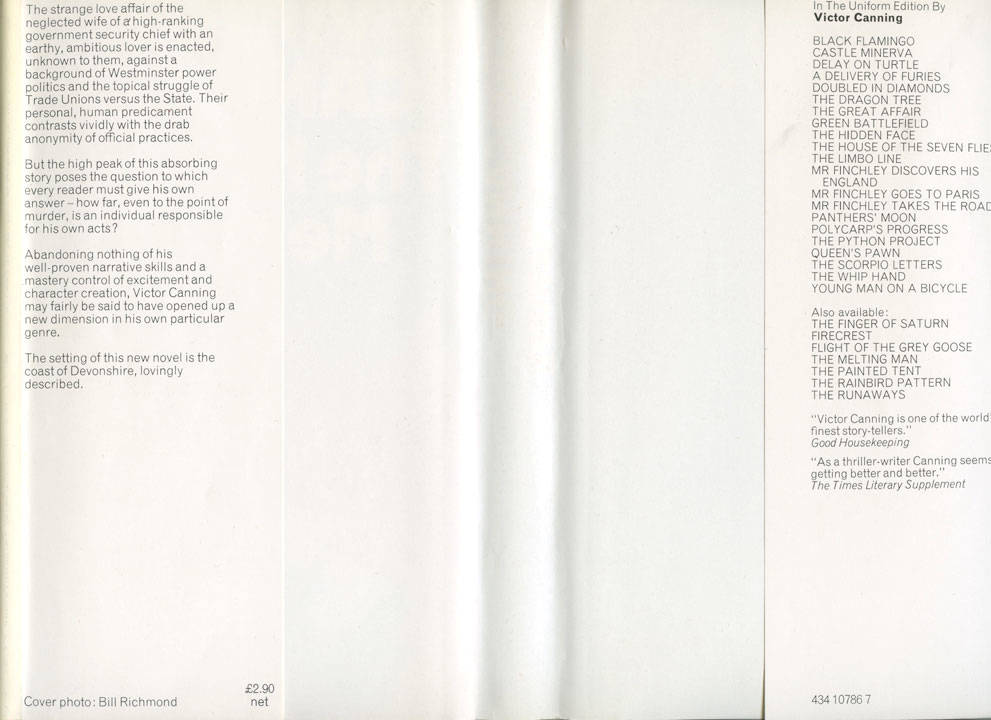 In the case of The Mask of Memory, it's actually a love and betrayal triangle, between Department second-in-command Bernard Tucker; his neglected, depressed, shoplifting wife Margaret, Bernard's marriage to whom – indeed her entire existence – Bernard has kept a secret from the Department for years; and Maxie Dougall, a third-rate artist who ekes a living flogging rubbish paintings to tourists, and who sets his sights on Margaret as a potential sugar momma. But there's an additional form of betrayal too, in the shape of the papers that Bernard has been tasked by his Department boss, Percy Warboys (at the direction of the Prime Minister), with retrieving and assessing – papers that, if they turn out to be genuine, would deal a fatal blow to the credibility of the left wing trade union movement ahead of the looming general election. 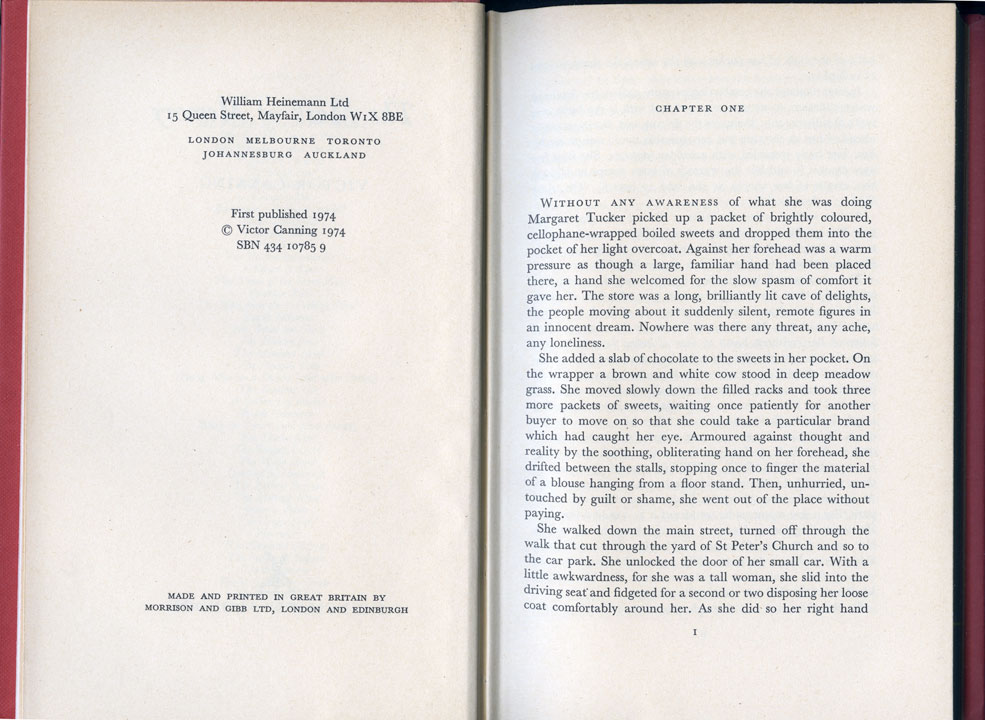 It's worth dwelling a moment on that political espionage plot, because at a remove of over forty years it's easy to overlook what a timely, if not prescient, novel The Mask of Memory must have been. 1974 was a tumultuous year for Britain, with the introduction of the Three-Day Week followed by two general elections, so Canning's references to newspaper strikes and trade union unrest, and his scenario of a (presumably) Conservative PM seeking to undermine the unions, have more than a whiff of the then-zeitgeist about them. Where his own sympathies lay I wouldn't care to conjecture, but writing, I would guess, in 1973 he was clearly vexed by events unfolding around him, as evidenced by a monologue from Warboys late in the novel:

"The position is absolutely clear. It is as near a certainty as makes no difference that there will be an election early in the New Year. And this time – and not before time – the lines of battle will be drawn up so that there will only be one choice before the electorate. Is a democratic government going to control this country or is the future of the county going to be in the hands of the trades unions and their ability to impose their will by industrial power? Forget all the nonsense of who controls the trades unions. It is the power of the State against the power of organised labour. Either government by law, or the rule of force by workers' organisations led by militants whose real purpose is plain anarchy – no matter what fancy political name they choose to give it." 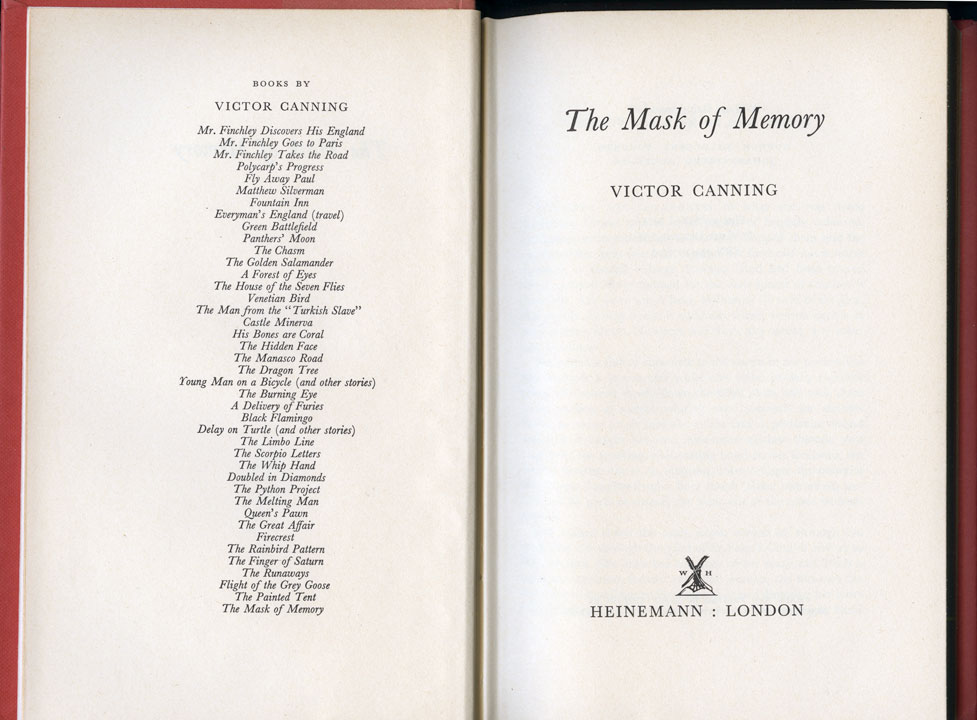 Fascinating as all this is, though, what really drives the novel, as with Firecrest and The Rainbird Pattern (and The Finger of Saturn for that matter), are affairs of the heart – or, more accurately, the heartless in the cases of Bernard and Maxie, at least for the majority of the story; there are revelations about the true feelings of both men late in the day (revelations which furnish the novel with a relatively upbeat ending). Perhaps more than that linking Whitehall department – or Department – and certainly more so than Canning's curious preoccupation with the workings of the mind – blackouts and memory loss here, hypnotism and clairvoyance in, respectively, Firecrest and The Rainbird Pattern – it's the author's singular take on those themes of love and betrayal which lends the series its particular character and appeal, and which ultimately makes The Mask of Memory as fine a piece of fiction, in my view, as either of its distinguished forebears. 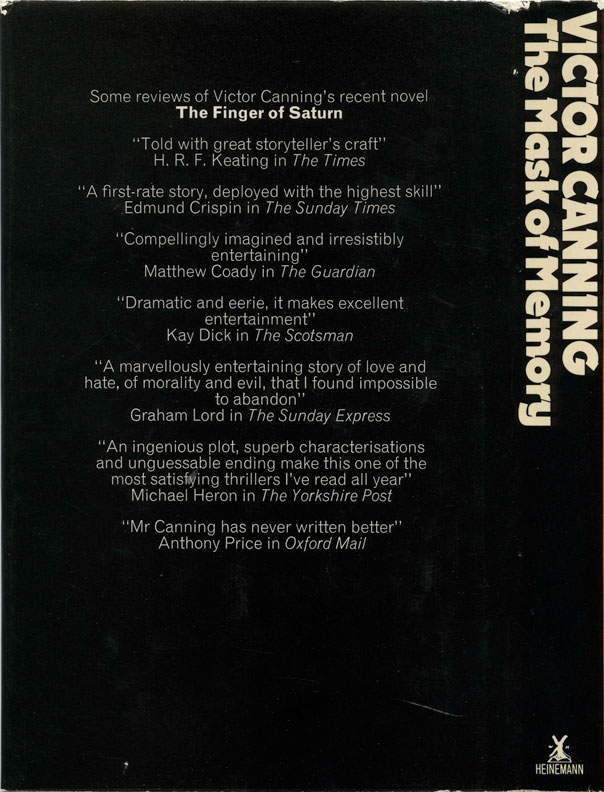