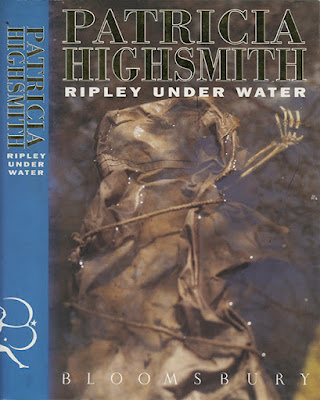 In September 1991, Patricia Highsmith travelled from her home in Tegna, Switzerland, to London in order to publicise her latest book, Ripley Under Water – her third for Bloomsbury (following 1987's Tales of Natural and Unnatural Catastrophes and 1990's Carol) and the last to be published in her lifetime (a final novel, Small G: A Summer Idyll, was published shortly after her death in 1995). One of her publicity engagements was an interview before an audience at the ICA on 27 September, conducted by the crime writer Michael Dibdin – since made available on the British Library website (archiver, incidentally, of Existential Ennui). Later that evening Highsmith signed copies of the Bloomsbury first edition of Ripley Under Water at the late lamented Murder One on Charing Cross Road (and again the following day at Waterstones in Earls Court); but at some point on the day before, 26 September, she inscribed, signed and dated a copy of the book to her publisher, Liz Calder. This copy: 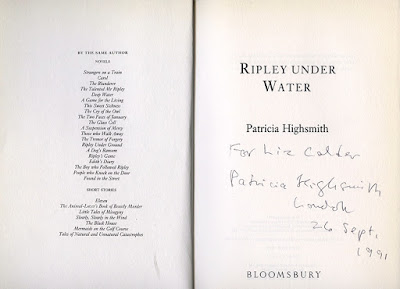 Which I acquired from Suffolk bookseller Claude Cox, and which came with an accompanying letter of provenance, signed by Liz Calder, on Full Circle Editions headed paper – Full Circle being the Suffolk publishing house Calder established in 2009 – the year after she left Bloomsbury – with her husband, Louis Baum, and Genevieve and John Christie. 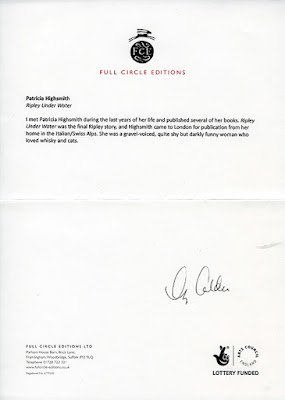 I wrote about Ripley Under Water, the final novel in the Ripliad, back in 2013 as part of the Great Tom Ripley Reread, when I got my hands on a 1991 London Limited Edition of the book, flat signed by Highsmith. I mentioned then how as a Highsmith and Ripley enthusiast – okay, fanatic – "owning a signed Ripley novel is quite something"; so to have now come into possession of a signed association copy of a Ripley novel – even though it be the same Ripley novel, albeit in a (slightly) different edition – inscribed to such a key figure in Highsmith's life, is properly thrilling. (The book wasn't too expensive either, certainly in comparison to another association copy of Ripley Under Water currently listed on AbeBooks, a 1992 US Knopf edition inscribed to a literary agent and priced at around £250.)

In her accompanying letter, Liz Calder states that she "met Patricia Highsmith during the last years of her life and published several of her books", making note of the time "Highsmith came to London for publication" of Ripley Under Water and how Highsmith "was a gravel-voiced, quite shy but darkly funny woman who loved whisky and cats". Writing in The Oldie the month after Highsmith's death (March 1995 issue, as quoted in Andrew Wilson's 2003 biography of Highsmith, Beautiful Shadow), Calder recalled that publicity trip to London, when Highsmith stayed at Hazlitt's Hotel on Frith Street, Soho:

I collected her there for an evening on the town, and she had discovered that so crooked were the floors that her whisky bottle slid of its own accord down the top of her chest of drawers and she was catching it with glee as it flew off the edge. She kept repeating this trick a bit like Pooh and his balloon. She had a childlike pleasure in simple things. 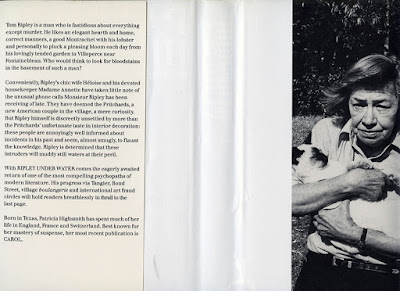 Ripley Under Water is not the best Tom Ripley novel, nor my favourite (that would be 1974's Ripley's Game, in both cases), but I love the Ripliad as a body of work and Ripley Under Water is an intrinsic part of that series – a sequel of sorts to the second Ripley novel, Ripley Under Ground (1970), with a handful of excellent and memorable sequences which are the equal of anything else in the Ripliad (Tom luring his nemesis, David Pritchard, to a secluded seaside Tangier cafe and then losing his rag with Pritchard and beating him up; Tom and Ed Banbury's gruesome disposal of the remains of the art dealer Murchison; the final fate of David and Janice Pritchard). So I'm delighted to add to my Highsmith collection a unique signed copy of the novel, and especially one with so firm – and firmly dated, not to mention located – a provenance. 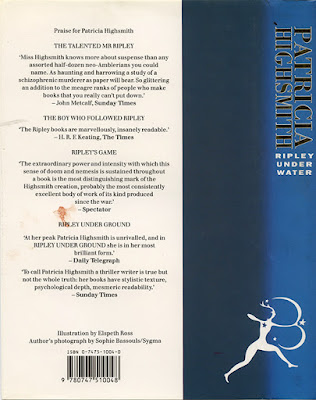 I'll be showcasing some more inscribed books over the coming weeks – not by Highsmith, although I do have a couple of other signed books by her I'll be unveiling at some point – but by other authors, some of whom have appeared on Existential Ennui before, and some who have not.
Posted by Nick Jones (Louis XIV, the Sun King) at 03:15