Those Who Walk Away by Patricia Highsmith (Heinemann, 1967): Book Review

I made the point – not a terribly insightful one but I'm going to repeat it anyway – in my review of Patricia Highsmith's 1965 novel A Suspension of Mercy last week that the 1960s was a prolific period for Highsmith, at least in regard to novels: she published seven novels from 1960–1969, more than she managed in any other decade of her career. But the '60s were also, arguably, and again in regard to novels, her most experimental, most developmental era as a writer. The Highsmith decade began with a claustrophobic portrayal of a stalker told exclusively from the twisted point of view of that stalker (This Sweet Sickness, 1960), continued with a sympathetic portrayal of a peeping tom (The Cry of the Owl, 1962) and concluded with a sequence of three novels which, book by book, edged ever further away from the field for which she was best known: suspense fiction.

The first book in that trio was the aforementioned A Suspension of Mercy, with which Highsmith attempted to craft a suspense novel without a murder – unsuccessfully as it turned out (at least in the non-murder department; it's a decent book in its own right). The final book in the trio was The Tremor of Forgery (1969) – also the final Highsmith novel of the '60s – which dispensed with suspense – or crime fiction, or however you want to label it – altogether in favour of a character study – of a man, Howard Ingham, a writer like Highsmith, working on his next novel, living in a foreign land, cut off from his home and questioning his life, his sexuality, even the very nature of existence. It's a brilliant book, perhaps Highsmith's best non-Ripley novel, but in order to get to it Highsmith had to write the middle book of that '60s triumvirate: 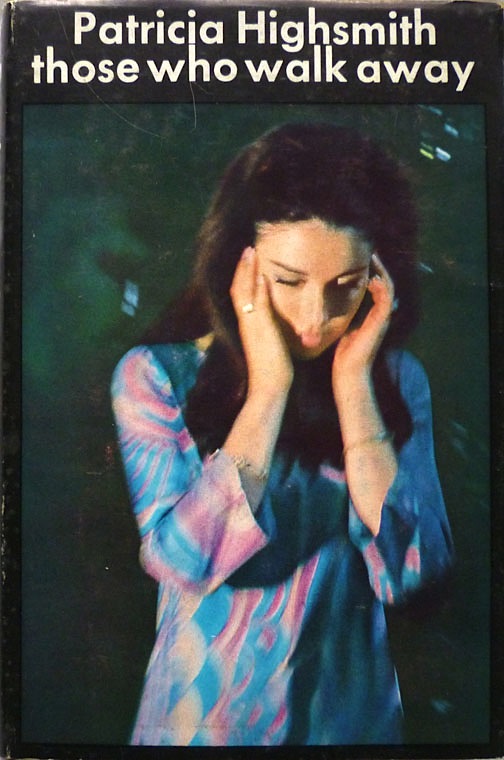 Those Who Walk Away, published in 1967 by Doubleday in the US and Heinemann in the UK, which is the edition seen above (dust jacket photograph by Bruce Pinkard). On the surface Those Who Walk Away is another entry in the Highsmithic (as Book Glutton might put it) subgenre of two men who become dangerously fascinated by one another – see also her debut, Strangers on a Train (1950), The Talented Mr. Ripley (1955) and from earlier in the '60s The Two Faces of January (1964) (others of her novels also touch on this theme to varying degrees). But though much of the novel is devoted to the game of cat-and-mouse in and around Venice between Ray Garrett, a young American art dealer, and his boorish father-in-law, civil engineer-turned-painter Edward Coleman, throughout Highsmith persistently subverts and frustrates the expectations of the reader. There are long stretches where not very much happens – on the surface; the interior lives of Ray and Coleman are another matter (the story unfolds from their alternating perspectives) – punctuated by violent clashes, but even these confrontations are inconclusive. 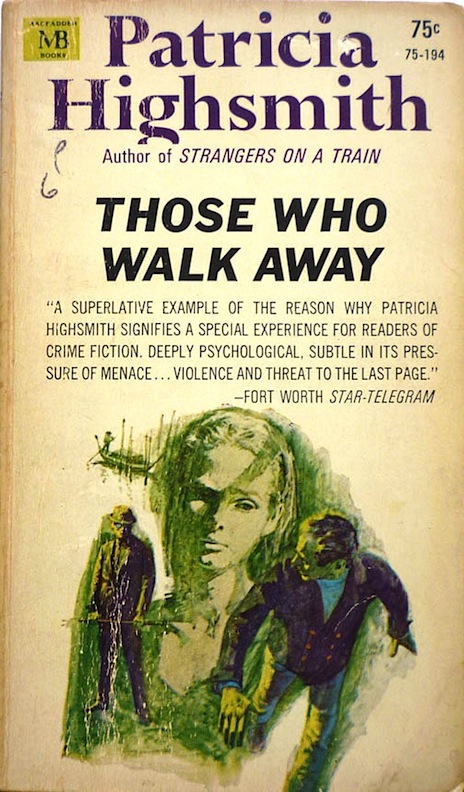 The cause of the animosity between the two men is the suicide of Coleman's daughter – Ray's wife – which occurs just prior to the start of the novel; that aside there are no deaths in the book itself. That's quite a change from Highsmith's novels to this point (her 1952 pseudonymous romance The Price of Salt aside), but just as interesting is what this would mean for The Tremor of Forgery. Like Those Who Walk Away, The Tremor of Forgery is shaped to an extent by a suicide – Ingham's friend and business partner, who kills himself once Ingham has arrived in Tunisia. But Highsmith does very different things with the narratives of the two novels as a consequence of those deaths. In Those Who Walk Away she shapes a cat-and-mouse story similar in many ways to some of her earlier novels, while in The Tremor of Forgery she veers off in a much more philosophical and interior direction.

That said, and as I alluded to above, there are philosophical elements to Those Who Walk Away, many of them to do with identity. Here it's possible to see a connection between Those Who Walk Away and A Suspension of Mercy, in that the earlier novel features a character – Alicia, the wife of American writer Sydney Bartleby – who is believed to be dead and who actively works to maintain that illusion, something that both Ray and Coleman do at various points in Those Who Walk Away. (It's also possible to see a connection there between Those Who Walk Away and Highsmith's second Tom Ripley novel, 1970's Ripley Under Ground: Ray in effect haunts Coleman in places – as opposed to Coleman, who hunts Ray – in a similar fashion to the way in Ripley Under Ground Tom haunts the painter Bernard Tufts, who believes he has killed and buried Tom.) This sloughing off of one's identity is also a part of the makeup of The Tremor of Forgery, so in that sense Those Who Walk Away can be viewed as a bridge between A Suspension of Mercy and The Tremor of Forgery. 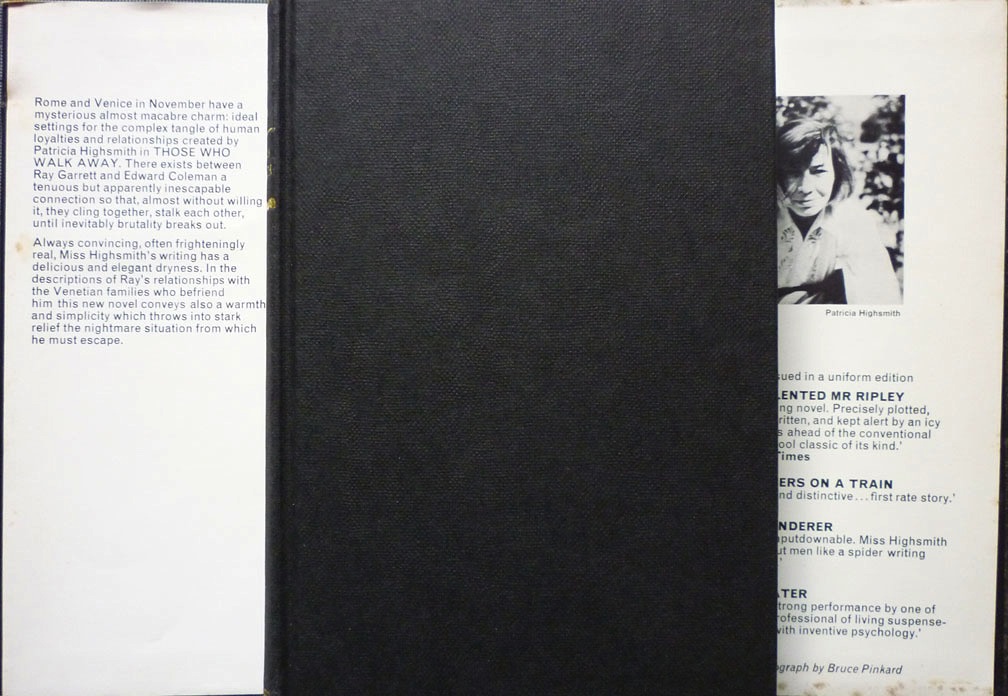 For Highsmith enthusiasts and aficionados it's a fascinating novel, although I'm not sure how fascinated a more general readership might be: a purported thriller without much in the way of thrills might not be the most enticing prospect, though there is of course always the unique and seductive – at least to my mind it's seductive – rhythm of Highsmith's prose style. But for those of us who can't get enough of Highsmith, it's an important book – not so much for what it is in and of itself, but what it represents in Highsmith's wider canon: the penultimate step on the road that would lead to The Tremor of Forgery. 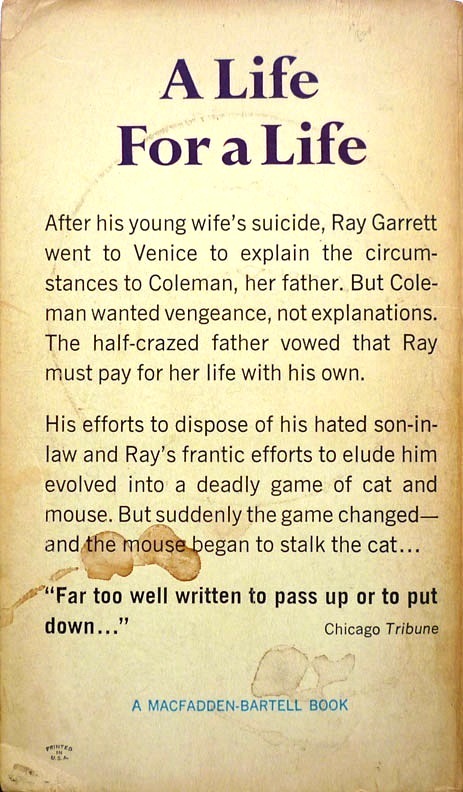 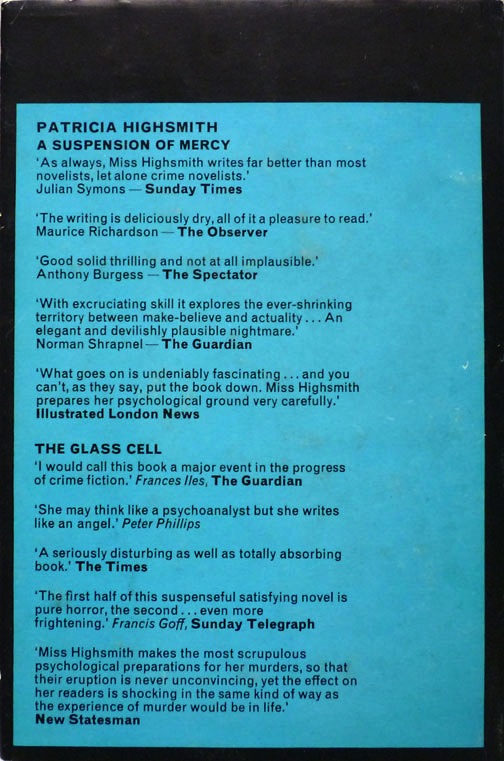 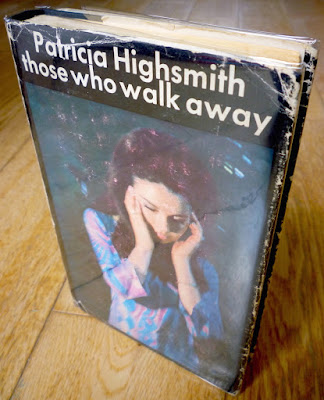