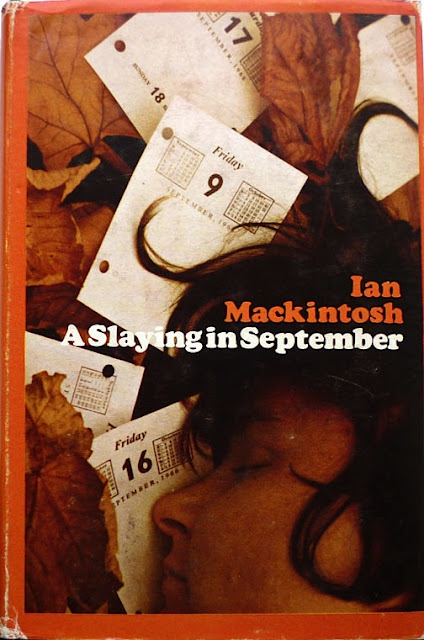 A dozen years before his presumed death in a plane accident; a decade before he created celebrated cult TV spy series The Sandbaggers (1978–1980); five years before he broke into television with the hugely successful BBC drama series Warship (1973-1977), Ian Mackintosh made his debut as a novelist.

He'd turned to writing, according to his brother Lawrie, in the early years of his naval career (he served in the Royal Navy from 1958 until his retirement in 1976, whereupon he was awarded an MBE) "to relieve the boredom, first at sea and later when posted to [a] remote Naval base in Scotland". The results were five crime and spy thrillers published in quick succession over a four-year period: A Slaying in September (1967), Count Not the Cost (1967), A Drug Called Power (1968), The Man from Destiny (1969) and The Brave Cannot Yield (1970). Each received just the one printing, in hardback, by Robert Hale; there were no paperback editions, and with Hale's print runs at the time being notoriously conservative – see also the Elmore Leonard books they published around this period – in the years since all five have become so unbelievably scarce that there is, at time of writing, not a single solitary copy of any of them available on the web. Consequently, online commentary on them is scant, largely comprising this Mystery*File post and my own post on the novels and Mackintosh's later work on The Sandbaggers from last week.

It's fair to say, then, that they represent something of a blind spot in Mackintosh's otherwise thoroughly raked-over oeuvre and life (aside from The Sandbaggers site OpsRoom.org, which boasts a good selection of articles and clippings on Mackintosh, there's a 2012 biography on him, The Life and Mysterious Death of Ian MacKintosh); but thanks to book dealer to the stars Jamie Sturgeon I've managed to secure four of those five novels, among them Mackintosh's debut, A Slaying in September, published in hardback in 1967 with a dust jacket designed by Colin Andrews. 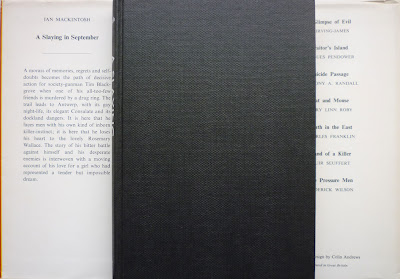 Written, like the other four books from this period – and like Mackintosh's later The Sandbaggers novelisation (Corgi, 1978) – in the third person, the novel introduces grey-eyed, black-clad loner and, as the press have apparently dubbed him, "Hired Gun of Big Business"/"High Society's Trouble Shooter" Tim Blackgrove, although the villagers who live near the shop Blackgrove buys his fags from, and which he's frequented ever since, a year ago, "on the run, the police behind him and his quarry in front... he had – with typical Blackgrove unconcern – taken time off to buy cigarettes [a]nd... found himself looking across the counter into the most appealing face he had ever seen", refer to him "simply as 'the detective from London who goes to the shop'".

So far, so bizarre – and we're still only on page two. For the unwary reader – those perhaps only familiar with Mackintosh's work on The Sandbaggers or Warship or even Wilde Alliance, or his novelisations of those TV shows – and of course having first surmounted the not inconsiderable challenge of actually laying hands on a copy of any of his five early novels – exposure to his writing, at least in its late-1960s incarnation, is an unsettling, unbalancing experience (I should mention that this was the second Mackintosh novel I'd read). As you turn the pages, initial misgivings give way to profound doubts and then slack-jawed disbelief, until, in the case of A Slaying in September, you reach the end of the first chapter, where Blackgrove, having bantered playfully with Julie, the doomed daughter of his occasional employer Julian Cambridges (or as Blackgrove labels her in his head, "Silly bitch!"), is described thus:

He was near to being contented. But then, he was deaf to the relentless rumblings of the tumbrils on the deadly road of his own destiny.

Alliterative, melodramatic metaphors such as this litter the text like twisted twigs bobbing atop a murky winter lido. But they're merely a symptom of the malaise which infects the novel – the fever sweat signifying the underlying illness, if you will (a disease which is evidently contagious). Because the bald fact of the matter is that A Slaying in September is really, really bad – hilariously, audaciously so – not just in terms of the tortured metaphors, or the cardboard cut-out characters, or the by turns hysterical and portentous dialogue – all of which abounds in abundance – but in the rubbish plotting too. 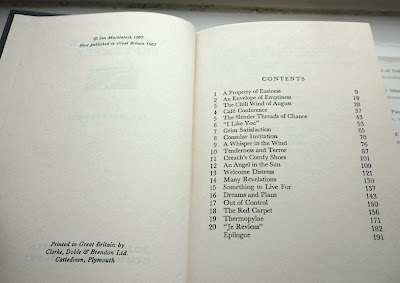 All of these elements come together in a kind of awful extended crescendo in the long middle stretch of the book. Having decamped to Antwerp on the trail of the drug dealer who murdered Julie Cambridges – and upon arrival, in a vengeful fury, torturing and killing a couple of drug addict underlings and dumping them in the same country ditch – Blackgrove practically forgets all about his self-appointed mission of retribution and spends over a third of the novel doing little other than moping about after the comely wench from the village shop, who's inexplicably turned up in the Belgian city. (There is an eventual explanation for this, one which forms the twist in the tale, but it truly beggars belief.) Seemingly the muse has transported Mackintosh to a higher plane of terrible prose here, because he pummels us with one putridly overripe passage after another:

...He felt awed. For so many months, he had been longing for a meeting with a girl who had the youth and vitality and the eyes and smile of that little shop-assistant; someone who would be a soulmate and who would understand him in all his moods and with all his weaknesses, who would be a shelter from his insecurity and a loving envoy from a Heaven where he would never again walk alone and where, through her, he would truly find himself...

...Fool! It might still be a dream! He sneered at his sentimentality. But he knew simultaneously, in the register of his own soul, that this girl's smile could, at will, send a flame through him, a fire that licked dangerously at the stockade of indifference which locked his heart and made him the man he was...

...Would not his life remain true to the pattern he had chosen for it: a tortuous testimony of canker and havoc, of truculence and fury, bringing disaster to himself and all those who touched upon it?...

I could go on. And I think I will:

...He had always believed that to 'feel one's heart soften' was a phrase used solely in women's magazines, but he could now feel his own iron soul liquefy in the glory of her smile and he knew that the rigid hold which he kept on the reins of his life was relaxing with dangerous celerity...

...But Alex's words were bricks of gold for the castle of hope he was building in his heart and he was warmed to the remotest and coldest regions of his soul...

...He had been damming up his floods of loneliness with a wall of self-delusion, telling himself that, inevitably, an angel would call for him, an angel who would be his very own, to guide him along the secret escape-route from the deadly quicksand that was his life. But his angel had come – and gone again. She had overflown his quagmire of hopelessness...

Thing is, in the word selection and the irresistible surge of the sentence structure, it's evident from these excerpts that Mackintosh could write. It's just that what he chose to write at this formative stage of his career were barking, overblown, intermittently violent potboilers.

Part of me wonders whether he wasn't bashing this stuff out with his tongue lodged firmly in his cheek – if he was perhaps parodying the spy novels and crime fiction and even romance novels which were prevalent at the time. There's a line in A Slaying in September, one which seems to me to be especially arch and knowing, which suggests that he knew exactly what he was up to: "If he wanted to, he could ask himself how many more times he would see some soul take that last ferry-ride across the Jordan, but euphemisms did not help." The only problem with that theory is Mackintosh wrote five of these buggers (three of them starring Tim bloody Blackgrove), which to my mind is wearing the joke really thin. 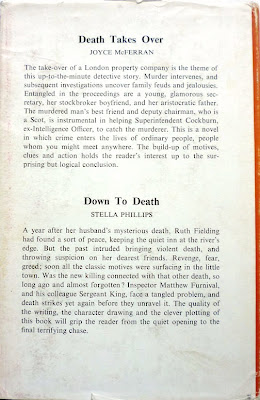 I guess you could chalk it up to youthful inexperience (Mackintosh must have only been in his mid-twenties when he penned A Slaying in September), to a writer taking his first faltering literary steps – first novel nerves, as it were; except that Mackintosh's second book, Count Not the Cost, published in the same year as A Slaying in September, is, if anything, even worse... 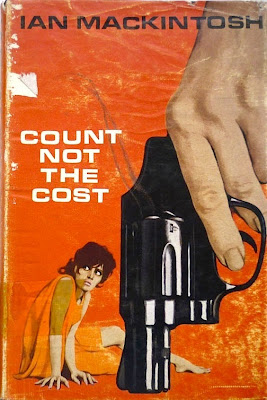