Let's take a look at the two latest additions to the still-expanding (these covers will take it up to 104 entries) Beautiful British Book Jacket Design of the 1950s and 1960s gallery – the first one of which I could do with some assistance identifying the jacket designer: 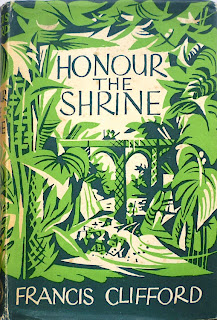 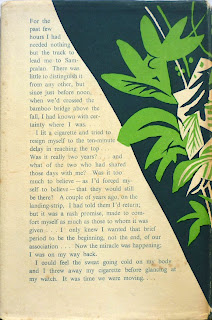 Namely Honour the Shrine by Francis Clifford, published by Jonathan Cape in 1953. There's no credit on either flap and no signature that I can see; I did wonder if it might be by Val Biro, but I put it in front of Val at a Lewes Book Fair last year and he thought not. Mind you, when I asked Val to sign the jacket of Desmond Cory's Secret Ministry at an earlier Midhurst Book Fair, he told me that wasn't one of his wrappers either – until his agent, David Schutte, pointed out Val's signature in the bottom left corner (Val did, after all, design an estimated 3,000 dust jackets). Plus, Val was doing a little work for Cape around this period (as was Hans Tisdall, who also comes to mind as a possible culprit) – he designed the wrapper for the 1953 Cape first of Alan Paton's Too Late the Phalarope for one – so he could have misremembered. In any case, until confirmation is forthcoming, the cover is consigned to the "Designer Unknown" group at the bottom of Beautiful British Book Jacket Design. 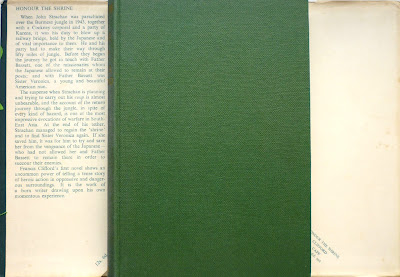 No such confusion surrounds the book itself, however, at least not round these parts, because I've blogged about it before, in its 1957 Corgi paperback incarnation. Clifford's debut, and quite uncommon these days (there are barely a dozen copies in any edition on AbeBooks at present, none of those the Cape first), it's one of a number of the author's novels I've spotlighted – see also Time Is an Ambush (1962), The Green Fields of Eden (1963), The Hunting-Ground (1964) and The Naked Runner (1966) – the jackets from the first editions of all four of which are also featured in Beautiful British Book Jacket Design.

And there's little doubt as to who was responsible for the dust jacket design of the second new addition to the gallery, despite there once again being no credit on the flaps: 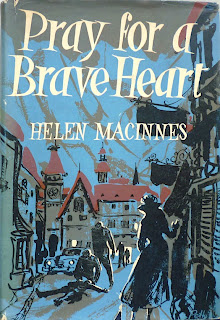 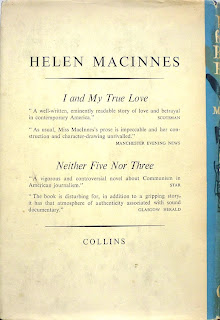 This is the British first edition of Pray for a Brave Heart by Helen Macinnes, published by Collins in 1955 and bought by me just the other week for two quid in the excellent Tome in Eastbourne. MacInnes's ninth novel, it's one of fourteen MacInnes spy thrillers that Titan Books have brought back into print since last year. The wrapper isn't, as I say, credited, but it does bear a signature: "Petty". That's almost certainly the Australian political cartoonist Bruce Petty, who evidently had a nice sideline designing jackets in the 1950s; other examples of his jacket work include a further three wrappers for Collins in 1955 – Jon Cleary's Justin Bayard, Laselle Gilman's The Dragon's Mouth and Kem Bennett's Dangerous Knowledge – along with Edward Maxwell's Quest for Pajaro (Heinemann, 1957), Tom Girtin's Not Entirely Serious (Hutchinson, 1958) and Robin Maugham's The Man with Two Shadows (Longmans, Green, 1958). 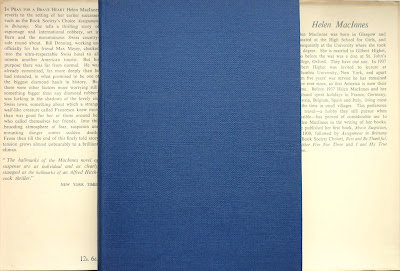 So, two further splendid duotone dust jackets for Beautiful British Book Jacket Design. And I'm not done with the gallery just yet...
Posted by Nick Jones (Louis XIV, the Sun King) at 07:00