As I'm sure I've stated before, I don't buy many new (as in, newly written and published) novels; my tastes tend to run to older, usually mustier tomes (although those tomes, though frequently foxed and smelling of fags, are often as not "new" to me). But occasionally either a new novel will catch my eye – as was the case recently with Roger Hobbs's debut, Ghostman, which I bought and read shortly after publication (verdict: not bad at all) – or an author whose work I admire will publish a new novel and I might find myself inclined to pick it up. Which brings me to Kate Atkinson's Life After Life. 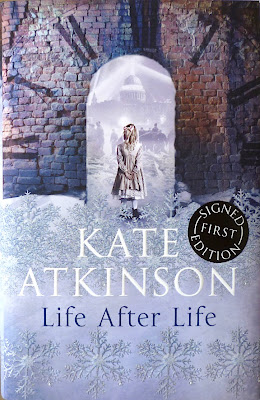 I love Atkinson's four Jackson Brodie novels – I've blogged about them a few times – but I've never read any of her non-Brodie books, so I was in two minds whether or not to try Life After Life, which was published by Doubleday in March of this year under a dust jacket designed by Claire Ward. In the end, the prospect of securing a signed first edition at cover price swayed me, along with the novel's premise: a woman, Ursula, dies over and over again at various junctures of her life, from childhood to adulthood, throughout the twentieth century until she gets it "right". I'm a sucker for a World War II-related alternate history tale (which Life After Life in part is) – Len Deighton's SS-GB, Sarban's The Sound of His Horn, C. J. Sansom's Dominion – so for me the novel's science fiction trappings – to use the term loosely – were an additional lure, even though I knew going in that the hows and whys of Ursula's plight probably wouldn't be addressed.

Which of course they aren't. But in the event, it turns out Atkinson has inadvertently tapped into a rather different form of storytelling than the alternate history thriller (and it'll be no surprise to anyone familiar with Atkinson's work that Life After Life isn't a thriller, either, even though it opens with an assassination attempt on Hitler). Structurally, the form the novel most brought to mind for me was that of the video game, or perhaps more accurately those old "choose your own adventure" Fighting Fantasy books. Video games and Fighting Fantasy novels both hinge on a learning process: you get something wrong the first time, get killed, and have to start again either at the beginning or earlier in that level, and that's pretty much how Life After Life works too, both for Ursula and in a more passive sense for the reader. In fact, you could probably chop the novel up and rearrange it in the same manner as The Warlock of Firetop Mountain and it would still function reasonably well. ("If you want to retrieve the dolly Queen Solange from the snowy rooftop, turn to page 87; if you want to leave her where she is, turn to page 36.") 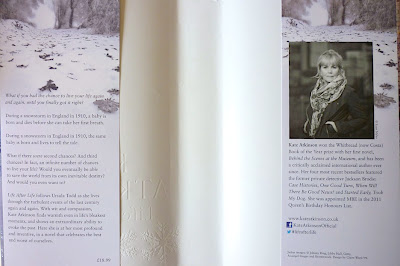 I say Atkinson has "inadvertently" alighted on this approach because I kind of doubt she's ever played a video game, or indeed read The Citadel of Chaos. In that sense, while the novel's structure might have more resonance and perhaps even be more familiar to younger generations than linear storytelling, it's not comparable to what, for instance, Christopher Brookmyre was getting at in a recent interview in SFX to promote his novel Bedlam (thank you to Book Glutton for bringing it to my attention) when he said that video games are changing storytelling, pointing to the film Source Code as possessing "the structure of playing a videogame, you have someone who has to keep reloading the game until he's got it right". It's more feasible that it's a side effect of a parallel development in home computing: word processing, which has made it far easier, far more natural-feeling, for writers to write in a disjointed, out of sequence fashion – something that many have always done anyway – noting random lines of dialogue, penning whole scenes before embarking on a book – but which writing on a word processor particularly lends itself to.

Mind you, I've no idea what Kate Atkinson uses to write with or on – computer, typewriter, pen and paper, an Etch A Sketch. From the little I've read about her, the scattershot, seemingly meandering quality of her novels is merely a symptom of how her mind works; witness the parenthetical asides which litter her books (Atkinson has said that she herself thinks in brackets). So the structure of Life After Life could simply be a case of Atkinson starting the novel over and over again, allowing Ursula to drift almost of her own accord into a succession of (slightly deadly) cul-de-sacs (where darkness, the "black bat", awaits her) and then rewinding and trying a different plot branch. 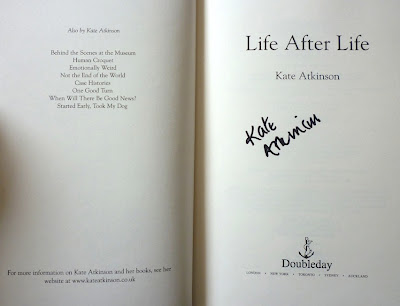 In the final analysis, it doesn't really matter how Atkinson arrived at the approach (thus making my musings in this post even more pointless than usual); the novel is what it is: enchanting, frustrating, breathless, confounding, but above all beautifully written – and in that sense at least the equal of the Jackson Brodie books. By way of illustration, I'll leave you with a passage from early in the novel, describing how the baby Ursula is regularly left alone in her pram in the garden by Bridget, the maid, at the behest of Ursula's mother, Sylvie, who has "inherited a fixation with fresh air from her own mother, Lottie":

Bare branches, buds, leaves – the world as she knew it came and went before Ursula's eyes. She observed the turn of the seasons for the first time. She was born with winter already in her bones, but then came the sharp promise of spring, the fattening of the buds, the indolent heat of summer, the mould and mushroom of autumn. From within the limited frame of the pram hood she saw it all. To say nothing of the somewhat random embellishments the seasons brought with them – sun, clouds, birds, a stray cricket ball arcing silently overhead, a rainbow once or twice, rain more often than she would have liked. (There was sometimes a tardiness to rescuing her from the elements.)

Once there had even been the stars and a rising moon – astonishing and terrifying in equal measure – when she had been forgotten one autumn evening. Bridget was castigated. 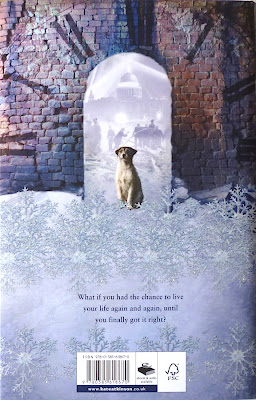