For this final post in this series on vintage paperbacks – for now, anyway; there'll doubtless be more old paperbacks in the new year – I thought I'd showcase a pair of Gold Medal spy fiction originals: one boasting cover art by an artist who'll be familiar to fans of Donald "Richard Stark" Westlake's Parker crime series; the other boasting cover art by another artist who'll be familiar to Parker fans: 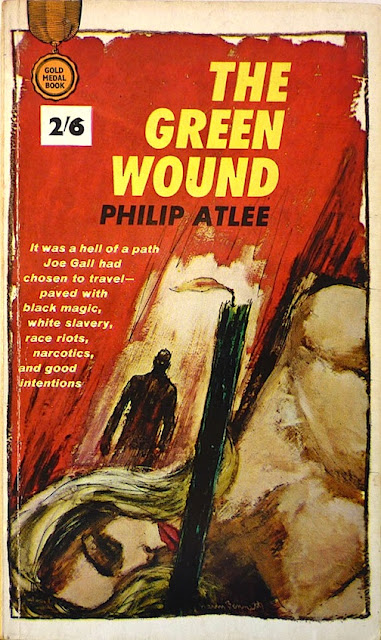 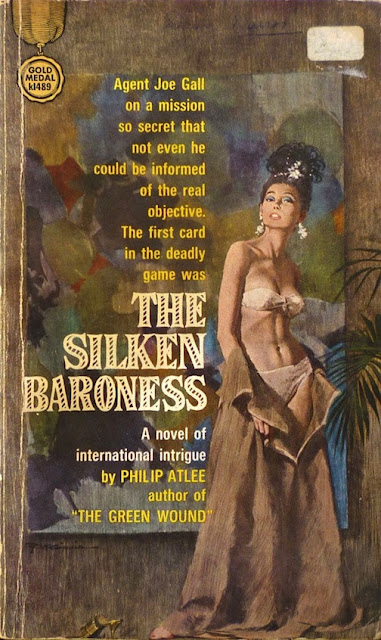 The Green Wound and The Silken Baroness by Philip Atlee, published straight to paperback in the US by Fawcett/Gold Medal in, respectively, 1963 and 1964 (although the edition of The Green Wound seen here is the near-identical British one, published by Frederick Muller in 1964). The cover artist on The Green Wound is Harry Bennett, the man responsible for the covers of the initial eight Parker novels published by Pocket Books from 1962 to 1966; the cover artist on The Silken Baroness is Robert McGinnis, the man responsible for the ensuing four Parkers published by Gold Medal from 1967 to 1969, plus two reissues. I've written about both artists repeatedly – follow their tags at the bottom of this post for more – so I shan't cover old ground again here, except to note that it's interesting to see their different approaches to the material: loose and expressive in Bennett's case, tighter and more traditionally illustrative in McGinnis's, who still manages to include a nod to abstraction in the form of the canvas in the background.

The Green Wound and The Silken Baroness are both narrated by CIA agent Joe Gall, who would go on to star in a further twenty novels – all of them bearing the legend "Contract" in their titles (for subsequent printings, the first two books in the series would become The Green Wound Contract and The Silken Baroness Contract) – in the process assuming the sobriquet "The Nullifier" (unfortunately "The Liquidator" and "The Eliminator" were already taken). Gall actually made his debut in an earlier novel, Pagoda, written under Atlee's real name, James Atlee Phillips, and published by Macmillan in 1951, but as the estimable Bill Crider points out, though it's the same character, it's not technically part of the series – for one thing, it's written in the third person rather than the later books' first. 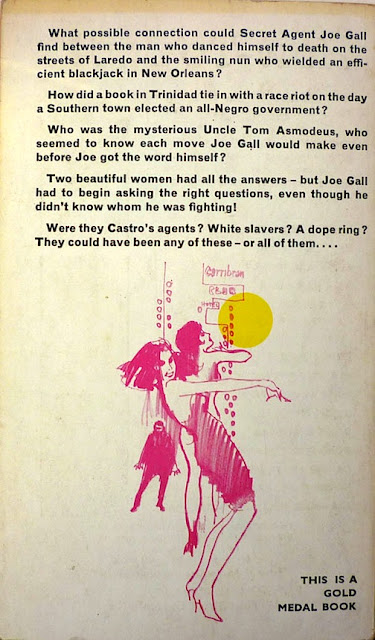 All of the Joe Gall books fell out of print decades ago, but they're fondly remembered by paperback enthusiasts – witness George Kelley's overview at Mystery*File and its attendant comments. And on the strength of The Green Wound – which is the only Gall I've read thus far – there's certainly merit in them: a tough cynicism leavened by a surprisingly adroit facility with the written word (Gall reveals early on that he used to be a writer), and a mystery that remains intriguingly opaque until very late in the tale. It has to be said, however, that a modern day reader might find the notion of a white secret agent pitted against a black conspiracy – led by a character operating under the alias Uncle Tom Asmodeus, and funded by enforced prostitution and white slavery – somewhat uncomfortable (this modern day reader did, anyway), and as this follow-up Mystery*File post notes, other books in the series also suffer from issues to do with the depiction of race. Then again, that's not exactly uncommon with old thrillers – and according to Atlee Phillips's friend, Don Walsh – and to Atlee Phillips's credit – the eighth Joe Gall outing, The Skeleton Coast Contract (1968), apparently earned the author the ire of South Africa's apartheid regime.

Of course, like other spy thriller writers, Atlee Phillips was reflecting, and to a degree sensationalising, the real life events of his era, whether that be racial conflict or, potentially, nuclear conflict. But it seems he also had a rather more direct insight into America and the CIA's involvement in certain events. Not only did he have firsthand experience of intelligence work in the 1950s – as confirmed by both Don Walsh and Atlee Phillips's son, the musician Shawn Phillips – but secondhand as well, in the shape of his brother, David Atlee Phillips: for twenty years a high-ranking officer in the CIA, and one of the architects of the Bay of Pigs invasion – a fiasco which, oddly enough, Joe Gall states in The Green Wound was the catalyst for his taking an extended leave of absence from the CIA. 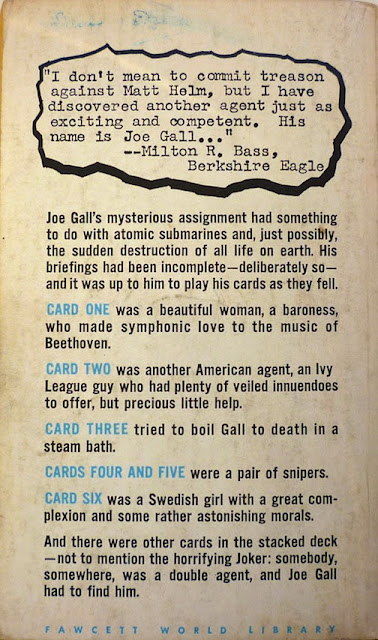 And that's yer lot for this year as regards paperbacks. If, heaven forfend, you've missed any of my recent posts on vintage softcovers, there are links below; but next on Existential Ennui: my review of the year in books and comics – 2012 edition.

The Score by Richard Stark

The Curious Facts Preceding My Execution by Donald E. Westlake

The Big Bounce by Elmore Leonard

I Am Legend by Richard Matheson

The Sound of His Horn by Sarban

The Stories of Ray Bradbury

The Deep Blue Goodbye/Nightmare in Pink by John D. MacDonald

A Purple Place for Dying by John D. MacDonald
Posted by Nick Jones (Louis XIV, the Sun King) at 07:30