Of all the designers featured on the Existential Ennui Beautiful British Book Jacket Design of the 1950s and 1960s permanent page, there are, at time of writing, just two who can boast more than five covers to their names in the gallery. One of those is Val Biro, an incredibly prolific artist with an instantly recognizable style who I've written about repeatedly (and who I'll be returning to shortly). The other is Denis McLoughlin, an equally prolific artist with a style just as distinctive, who again I've spotlighted a number of times on Existential Ennui, primarily in relation to the wonderful dust jackets he designed for British publisher T. V. Boardman's Bloodhound Mystery imprint in the 1950s and '60s – around 550 of the buggers – and especially the jackets he created for Boardman's editions of Donald E. Westlake's earliest novels (see this post on Westlake's 361 for a recent example).

McLoughlin's striking, evocative Boardman jackets are, to my mind (and to many other avid collectors), among the best ever to wrap around a novel – let alone a crime or spy novel – and a new illustrated book celebrates those spectacular wrappers alongside the hundreds of other covers and comics McLoughlin created during his near-fifty year career. 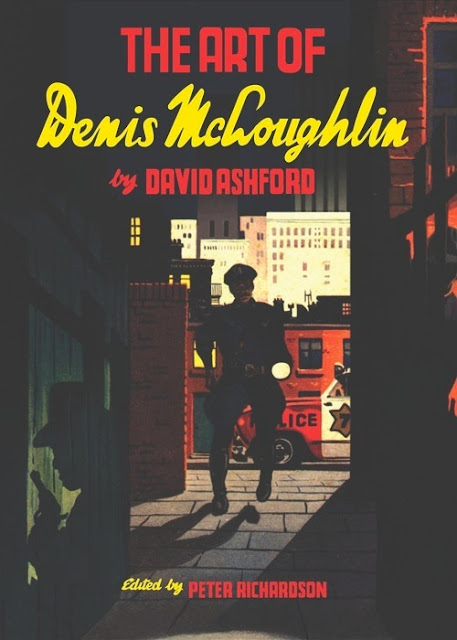 Published by Book Palace Books, David Ashford's The Art of Denis McLoughlin is a sumptuous hardback expansion of Ashford's own rather shorter 1994 tome The Hardboiled Art of Denis McLoughlin, which has been revised, added to and given an all-round spit and polish by editor and designer Peter Richardson. The result is 272 pages of glorious cover and comics art, interspersed with essays by Ashford, recollections by the late McLoughlin and checklists of every dust jacket and comic strip McLoughlin ever worked on (plus some he didn't, included to avoid confusion).

Here in the UK, McLoughlin is still probably best know for his comics: his Buffalo Bill western strips for Boardman, his war and adventure comics for IPC (in Wizard, Warlord, etc.) and DC Thomson (a twenty-year run on Commando: War Stories in Pictures from 1982 to his death in 2002), plenty of which is showcased in the book, and which, taken on its own, would be enough to secure him a place in the pantheon of top flight British illustrators. But add in those Boardman covers as well, and the scope and scale of McLoughlin's achievement becomes breathtaking. All told, McLoughlin must have created well over 800 covers for Boardman – not just for crime and suspense novels but also romance, westerns, and even the odd bit of science fiction – almost all of them hand-painted and lettered. 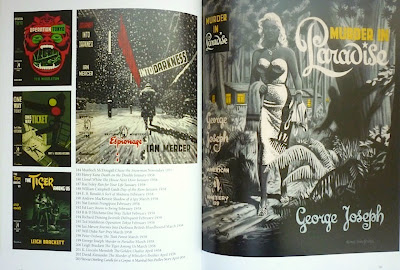 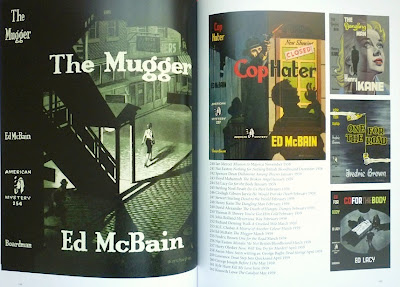 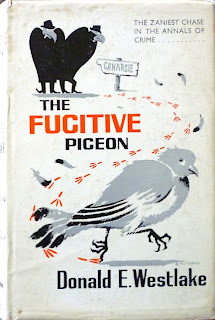 Ashford and Richardson rightly dedicate well over half the book to this remarkable but rarely seen (a good many of the Boardman Bloodhounds are extremely hard to come by) body of work, tracking the development of McLoughlin's Boardman covers from 1944 to 1968. Ashford's personal preference is for the "glorious" full colour covers McLoughlin painted up to the late 1950s, rather than the later duo-tone or restricted palette jackets, which he calls "a pale shadow" of the earlier works, and which are perhaps under-represented as a result. For my money, however, it's those later covers – including some of the Donald Westlake wrappers, notably Killy (1964, and sporting a self-portrait of McLoughlin) and The Fugitive Pigeon (1966) – with their masterly deployment of chiaroscuro and command of negative space, that are the more inventive, innovative and experimental, and even Ashford has to admit that they're "arresting and imaginative". 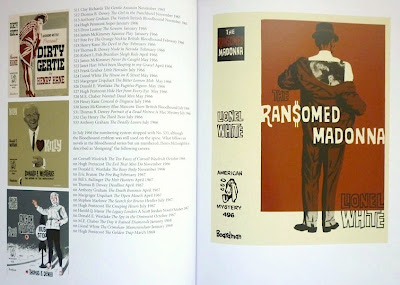 Much is revealed about how McLoughlin created the Boardman covers, some of which information I previously suspected but didn't know for certain – such as the fact that he almost always painted the lettering directly on top of the artwork (rather than as an overlay), making it intrinsic to the overall design (see also the aforementioned Val Biro), and that he made a point of reading every one of those novels, often illustrating scenes lifted directly from the stories (see the apocalyptic climax depicted on the wrapper of Westlake's Killing Time). Ashford and Richardson even include some of the posed photographs McLoughlin took for reference, many of them featuring McLoughlin himself or his brother Colin as models, sometimes dressed up for the part as gangsters or cowboys (Dan Dare creator Frank Hampson, working around the same period, did something similar); when McLoughlin was particularly pushed for time, he'd occasionally collage the photos themselves into his cover designs. 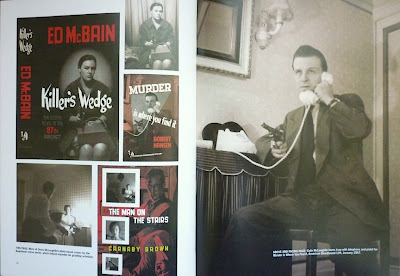 Other revelations abound. I wasn't aware that McLoughlin took his own life, for example, shooting himself – with "the only non-replica gun that he possessed and for which he had only the one bullet" – at the age of eighty-four because he was "worried about the loss of feeling in his right arm and feared that he wouldn't be able to draw again". I'd also seen scant few of his comics stories, one of which, a 1954 crime tale titled "Roy Carson meets Waldo the Mystic", is reproduced in full; the dialogue, by brother Colin (who took over the writing from Denis after the initial outing), is an uneasy, haphazard mix of hardboiledisms and British comics exclamations ("ouch!"), but the art, staging and pacing are surprisingly good, and in places quite modern. 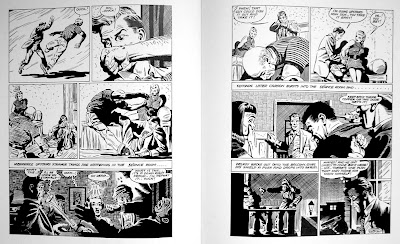 If I had to level a criticism at the book, it would be this churlish and rather childish one: I'd like to have seen even more Bloodhound covers. I certainly don't begrudge the space taken up by the comics material, but a volume showcasing every single T. V. Boardman dust jacket McLoughlin created: now that would be a thing to behold. But given how many hundreds are present and correct in this book, that really is an ignoble sentiment, and one that, frankly, I'm embarrassed to have shared. So let's forget I said anything, and instead end on a positive note: The Art of Denis McLoughlin is a beautiful and fitting tribute to an astonishingly talented artist, illustrator and designer, and deserves a place on the shelves of every discerning appreciator of fine dust jacket design. 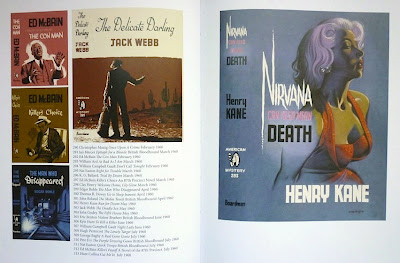 The Art of Denis McLoughlin is limited to 950 regular editions and 120 signed editions, and is available to buy from The Book Palace. For more on McLoughlin, click here, here, here, here and here.
Posted by Nick Jones (Louis XIV, the Sun King) at 09:25