The Lewes Book Fair: An Appreciation

Well I hope we all enjoyed the interview with novelist Christopher Nicole I posted on Monday, and indeed the second part of Chris Lyons's Richard Stark/Parker essay, "The Wolf Man" – available, of course, on The Violent World of Parker blog. And since I seem to be developing a blogging theme this week of posts-which-require-little-to-no-writing-on-my-part, and seeing as this Saturday (17 March) marks the return of the Lewes Book Fair to the fair East Sussex county town in which, dare we forget, I both live and work, I thought I'd persist with that not-much-effort-on-my-part-required theme and post an article I wrote about the fair for local listings magazine Viva Lewes last year.

It's a little out of date now – you'll note I mention May's fair; there have been a few more since then – but I was fairly pleased with it at the time, and I think it pithily summarizes what makes the Lewes Book Fair special. The photos illustrating the article are taken from the website of local animal rescue charity Paws & Claws, the backers and beneficiaries of the event – there are lots more pictures on their site. (The photo at the top of this post, however, which shows some of the books I've bought at the fair, is by Rachel Day, whose website can be found here.) If you're in the area on Saturday, perhaps I'll see you at the fair (although I'll only be making a fleeting appearance, early doors), but failing that, check back here tomorrow for another exclusive Existential Ennui competition – and this time the competition will be open not only to American EE readers, but to UK and worldwide readers too... 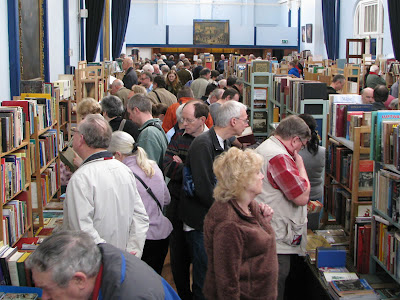 Once every few months, just before 10am on a Saturday, a small queue forms at the Fisher Street entrance of Lewes Town Hall. On first inspection this assembly might seem entirely respectable: a polite concatenation of beige middle age. But look closer, and you’ll glimpse a fevered anticipation in their eyes…

They’re queuing for the Lewes Book Fair, a staple of the local bibliophile’s calendar. Held five times a year, the fair is a chance for book hounds to peruse the wares of a variety of secondhand booksellers, big and small, all hawking books on subjects as varied as topography, history, local interest and nature, not to mention fiction – first editions and paperbacks a-plenty – poetry and assorted paraphernalia. If it’s the printed word you’re after, the Lewes Book Fair caters to all.

Set up by Lewesian John Beck in 1992, the fair began on a twice-yearly basis with twenty stallholders. These days it’s more like forty, with between 400 and 500 punters attending each fair from as far afield as London and Southampton, as well as Lewes and Sussex. The most recent event in May was typically crowded; an hour in it became tricky to navigate the two long aisles of stalls there were so many people poring over old tomes. But I did spot a signed first edition of Conan Doyle’s 1891 historical adventure The White Company (£500), a very scare first of David Nobbs’s The Death of Reginald Perrin (£165) and, more in my price range (so of course I bought ’em), a book club edition of John Gardner’s first Bond novel Licence Renewed (a steal at two quid) and an early printing of Dennis Wheatley’s innovative 1936 crime fiction dossier Murder off Miami (£6).

The Lewes fair is just one of many such independent events held up and down the country every weekend – on average fifty per month – but having attended a good number in other parts of the UK, I can report that ours remains among the best. I asked John – who runs the fair with his daughter Melanie and friends, and who is an avid book collector himself – why that is.

“I think Lewes is still popular as we regularly get good footfall and bargains are always to be had,” he told me. “The book trade is suffering from the internet and e-books, but fortunately many buyers still like the tactility of a book, which to many is a piece of art in its own way. Also, by having the book in your hand you can better judge the condition and ‘value for money’ if one is a collector.”

John’s dream is to instigate a Lewes Book Week, based around the fair but featuring “book readings, book signings and talks on the literary heritage that Lewes has. Hay-on-Wye have a very successful annual event, which is well hyped, and Hay is a place with no real literary history at all. So Lewes has a great advantage in many respects.”

Indeed it does. I feel a campaign coming on... 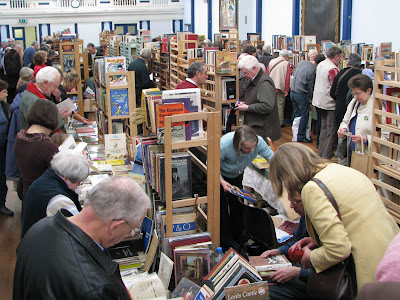