A 2003 first UK Robert Hale hardback of Richard Stark's Breakout, the twenty-first Parker novel, originally published by Mysterious Press in the US in 2002. I got it for practically nothing on Amazon, and inevitably came a cropper: it's ex-library, and not that great condition. It's OK, the insides are clean and perfectly readable, but the dustjacket's obviously been well handled, and it's not as firm as it could be. Just goes to show you can't trust a lot of Amazon dealers when you buy cheapo books. I really like the jacket illo on this one – a slick, fist-slammin' painting by Derek Colligan – so, hopeless case that I am, I've just ordered another, hopefully better condition, copy. Mind you, there aren't many copies to choose from of this one; Amazon/AbeBooks only have a couple listed.

One thing I did find interesting was the case was a PLC with the same design as the jacket printed on it: 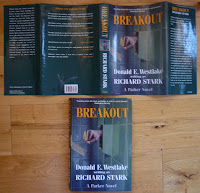 The other two Robert Hale editions I have – Flashfire and Firebreak – have standard imitation cloth cases, as most hardbacks do. I don't know if that means Breakout was only issued in hardcover for libraries, as sometimes happens? That would explain the PLC. It's also slightly shorter than the previous Robert Hale hardbacks:

Intriguing. And points deducted from the designers at Hale for not lining the spine designs up properly – checking that was drummed into me when I first started in book publishing. Anyway, I'll have a different Robert Hale edition in my hands shortly, at which point it could be time for a Parker Robert Hale cover gallery...

(UPDATE: Turns out that ex-library edition of Breakout with the printed case was an edition produced presumably for libraries only. When the other copy I'd ordered turned up, it had the same imitation cloth case as the other Robert Hale editions. So there you go...)
Posted by Nick Jones (Louis XIV, the Sun King) at 06:59